Police were called to constructivist masterpiece Narkomfin on Tuesday after continued 'illegal' repair works were documented by architectural enthusiasts, despite Moscow's Department of Cultural Heritage issuing an injunction for them to stop last week.

"The works which began, have ended. Inspection stopped all works," the head of Moscow's Department of Cultural Heritage, Alexander Kibovsky, stated at a news conference on April 17, Itar-Tass reported.

Kibovsky added that when an inspection was carried out in the building, construction work was not at that point being undertaken, but that nonetheless an injunction had been issued prohibiting the resumption of repairs, and that any restoration would take place under the strict control of the department, Mosgornaslediya.

Recent construction works at Narkomfin have been deemed 'illegal' by architectural experts.

However, the block's primary owner, CEO of investment group Kopernik, Alexander Senatorov, calls the repairs temporary and necessary to fix problems, such as leaking roofs, so that apartments are habitable.

Despite the Moscow government injunction, architectural enthusiasts have repeatedly documented a continuation in repair works, and on Tuesday police were summoned.

"No works were supposed to be going on, and we saw that they were," Natalia Melikova, photographer and creator of the "The Constructivist Project," which promotes  Russian avant-garde architecture, told The Moscow Times via Skype on Wednesday, after paying a visit the previous day.

Melikova was prompted to visit after receiving a call from a "friend of a resident" who said that "they [construction workers] were breaking the windows. "Not cutting them out — and removing — but breaking," Melikova added.  "While we there 'admiring' the new windows, we heard construction sounds," Melikova said.

A member of architectural watchdog group Arkhnadzor who had accompanied Melikova to the building, called the police. Law enforcement officers were taken to a room on the first floor where workers were stationed. Police started questioning them, reported Melikova, asking for passports and documents; requests which were initially met with some resistance.

"For the police it was interesting that workers were working in a private residence, without the owner on premises and no construction documentation," Melikova stated.

Lawyers from the firm LLC Centurion explained to the police that the area was "private property," according to the Arkhnadzor member who expressed a wish to remain anonymous. 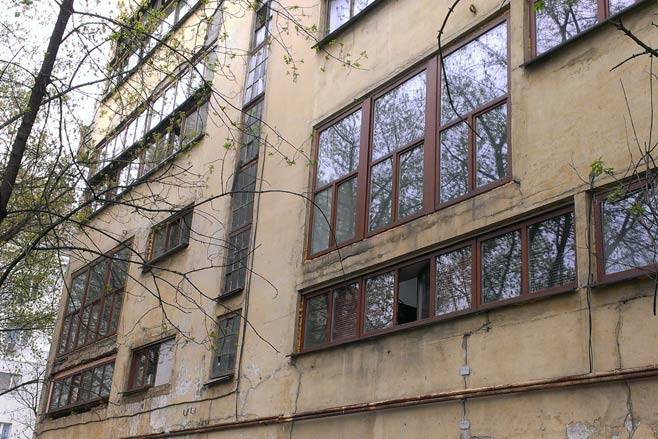 "Police are required to examine the reasons for their being called in the forthcoming days and issue a response," Melikova stated.

Construction has also been documented by architectural historian Anna Bronovitskaya, who noted work on three apartments, including the "penthouse" on April 17. A representative of the Homeowners' Association provided Melikova with a document, of which she took a photograph, which was then published publicly by Bronovitskaya on Facebook. It stated that “all the activities are carried out without disturbing the structural elements of the house, without violating/destroying original elements of the house."

Narkomfin, designed and constructed by Moisei Ginzburg and Ignaty Milinis for the People's Commissariat of Finance at the beginning of the 1930s, has repeatedly been included on World Monuments Fund 'watch' list for endangered structures, with WMF citing it as "one of the finest examples of surviving Russian Constructivist architecture."

Despite its dilapidated state, it continues to be a site of inspiration and pilgrimage for architectural historians and architects alike, and decisions determining its fate always inspire impassioned debate.

Departmental adviser Nikolai Pereslegin was named less than two weeks ago by Senatorov as a potential architect of a longer-term $12 million full "scientific" restoration project on Narkomfin, which could begin in less than two years. Pereslegin told The Moscow Times shortly afterward that he was not involved. However, he responded to the news of unapproved renovation works on April 15, before Kibovsky made statements to the media.

"I became aware of the work currently being carried out at Narkomfin. I am fundamentally opposed to it," he said in a statement released on Russian architecture and design website archi.ru. "It is illegal. As far as I know, the work being carried out has already been stopped by an inspection by Mosgornaslediye," Pereslegin said.

He added his convictions that any future projects concerning the "icon of its time" should remain open and public as Narkomfin is more than "just a building."

"For nearly a decade, many professionals have been involved in the fate of Narkomfin … not only Russian but also foreign experts," said Perelegin.

Kibovsky specified on April 17 that the restoration of the building was being designed and that there were "interesting proposals" for its restoration which may yet be utilized.