The Golden Mask Festival awards ceremony, which unfolded over a leisurely three hours on Friday at the Bolshoi Theater, had plenty of surprises.

The biggest jolt however came when guests entered the hall to find it absolutely empty. Instead of sitting in the stalls, spectators were directed to a grandstand on the stage itself. The backdrop for the entire evening was the spectacular sight of the curving balconies, the glistening chandeliers, the gold-embossed facades, and the rich velvet drapes hanging in prestigious boxes.

It was a sight most of us mere mortals will never forget.

So moving was it, that Dmitry Chernyakov, an opera director presenting awards, gave a humorous speech about the first time he attended the Bolshoi. He pointed to the last balcony and told of the time he bought a ticket with obstructed view for 80 kopeks, and was forever after enchanted by the magic of opera.

Lyudmila Maksakova, an actress announcing the best foreign production award, explained what a moving experience it was for her to stand on the Bolshoi stage where her mother was a soloist for 30 years.

Nostalgia aside, the business of the evening was the awards, which were made for outstanding achievements in the categories of drama, opera, dance and puppetry during the 2012 to 2013 season. Forty-eight delicate glass and ceramic plaques depicting a masked face in blue, gold, red and white were handed to winners selected by two juries, one for musical theater, another for drama. Ten awards were honorary, but 38 were won through the festival competition, which concluded on Thursday.

Moscow artists were top winners, pulling down 18 awards. St. Petersburg grabbed second in the awards race with eight winners, while Novosibirsk and Yekaterinburg had strong showings with four victors each.

There were few runaway winners this year, although the ballet "Salieri Variations" by the Yekaterinburg Theater of Opera and Ballet, and the opera "Eugene Onegin" by St. Petersburg's Mikhailovsky Theater grabbed three plaques each.

Two shows in the field of operetta and musical shared four awards. "Rusalochka," produced by Moscow's Stage Entertainment, won best production, while Manana Gogitidze took best female singer for the second year running for her performance of Ursula in the musical. Dmitry Suslov took best male singer and Ainars Rubiks was named best conductor, both for their work on Leonard Bernstein's "Mass" for the Novosibirsk Theater of Opera and Ballet.

The home crowd gave supportive cheers to five winners from the Bolshoi: "The Rite of Spring," best contemporary dance production; Alexander Shishkin, best designer in a musical production for "Rite of Spring"; Venera Gimadiyeva, best female singer in "La Sonnambula"; and Antony MacDonald, best costume designer in a musical production for "The Child and the Spells." Composer Sergei Nevsky and librettist Claudius Lunstedt were given a jury award for their work on "Franziscus," a coproduction of Opergruppa and the Bolshoi.

British-born conductor Jan Latham-Koenig beat out strong Russian competition in the category of opera conductor with a fine interpretation of Wagner's "Tristan and Isolde" for Moscow's Novaya Opera. Latham-Koenig joined Lunstedt, Weissbard, MacDonald and others as increasingly frequent examples of European artists having an impact on the making of Russian theater.

In fact, as if applying an exclamation point to the Culture Ministry's recent decision to drop a declaration that "Russia is not Europe" from a forthcoming statement of national cultural policy, Golden Mask organizers seemed to use the ceremony to declare boldly that European and Russian theater are closely intertwined. Anne O'Byrne of Ireland, John Owen Jones from Wales, Paul Brown of England, Gianni Forte and Romeo Castellucci of Italy, Muriel Mayette of France, and Makhar Vaziev, the artistic director of La Scala in Milan, all lent a hand presenting awards. 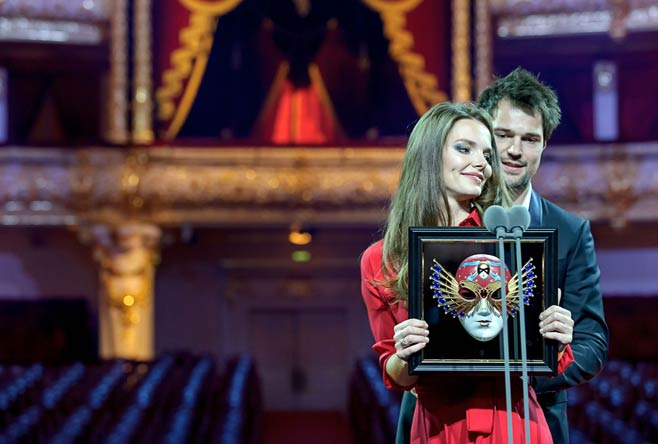 Yelizaveta Boyarskaya and Danila Kozlovsky stand in for Lev Dodin to accept the award for Best Large-Scale drama production.

Accepting the plaque for best foreign production shown in Russia during the 2012 to 2013 season, Belgian director Luk Perceval sparked applause with his comments. He pointed out that his "Behind the Door" for Thalia Theater, Germany, told the tale of German soldiers returning from war, and added, "This prize proves that theater can do more than politics."

Two popular winners were veteran St. Petersburg actress Era Ziganshina, taking best supporting dramatic role for her work in the Alexandrinsky Theater's "Liturgy Zero," and young star Alexandra Ursulyak, who was honored as best actress for her powerful performance of Shen Te and Shui Ta in "The Good Person of Sichuan" at Moscow's Pushkin Theater.

Ziganshina, wearing a sly smile, drew laughs when she quipped, "However much they say prizes are not important, and that what’s important is taking part, it is terribly pleasant to hold this mask that is now mine!"

Alexei Vertkov was named best actor for his portrayal of Venichka in "Moscow-Petushki" at the Studio of Theater Art.

Rimas Tuminas, who declined to speak because of a bad case of laryngitis, silently accepted his best director award for his innovative rendition of "Eugene Onegin" at the Vakhtangov Theater.

Accepting the best production award for Dodin with starring partner Danila Kozlovsky at her side, actress Yelizaveta Boyarskaya said, "Every work with Dodin is a kind of victory. We love him very much."

Best small-scale production went to Anatoly Ledukhovsky's "Vassa" for the small Vedogon Theater, which officially lists itself as resident in Moscow and the Moscow suburb of Zelenograd.

"Distant Intimacy," a production created with and by mentally and physically challenged artists at the Playwright and Director Center, was pronounced the winner in the Experiment Competition. Accepting the plaque, Gerd Hartmann said, "I hope this award is a signal that people with mental difficulties are a part of society."

In the category of puppet theater, the Penza Puppet House Theater grabbed two awards for its production of Slawomir Mrozek's "To Kill Charlie," best designer for Viktor Nikonenko, and best puppet production. In his acceptance speech, director Vladimir Biryukov gave a twist to the usual "thanks, Mom" spiel.

"I also want to say hello to Mom," Biryukov concluded his remarks. "She lives in Ukraine. Mom! Everything is going to be okay!"

Raymond Stults contributed to this report.