The most common auto-related image in Moscow is of traffic; waves of cars flowing, and not flowing, through endless tiers of congestion and honking horns at swerving Ladas.

A group of trucks took a sort of revenge on some boxy Russian vehicles on Saturday at Olimpiisky Sports Complex, crunching the mainstays of Soviet roads under their meter- and-a-half-tall tires.

Monster Mania, a competition between four monster trucks in various events, hosted two shows on Saturday in which four European drivers revved and crushed for hours to the delight of eager crowds of Muscovites distracted from news of tense diplomacy and geopolitical rivalries by screeching engines.

However, talk of a new Cold War and global isolation for Russia created a strange parallel to seeing 15,000 Russians watch an event that has much stronger ties to Missouri's St. Louis than the Leningrad region's St. Petersburg and perhaps shows the breadth to which Russia has attracted different facets of Western culture.

Monster truck drivers, like many businesses looking to get a foothold in Russia, do not really see political or cultural differences getting in the way of expanding their brand. "I think absolutely everybody gets Monster trucks. It is just big, loud and abusive," said Tony Dixon, a British driver whose truck "Swamp Thing" has performed in the U.S. and Europe.

The monster truck show was just one of a series of motorsport events last week that attracted Russians, a group that has increasingly been spectators at more high-profile events in the auto world. The wildly popular British racing series "Top Gear" occupied the same space at Olimpiisky last Tuesday and Wednesday for its tour Top Gear Live, which like Monster Mania was making its return to Moscow following an event in 2013.

Racing culture is not new to Russia and the country held a number of spectator races during the Soviet era, though drivers raced around tracks in Soviet cars available for the general public without any sponsors rather than super souped-up machines covered with logos for laundry detergent. 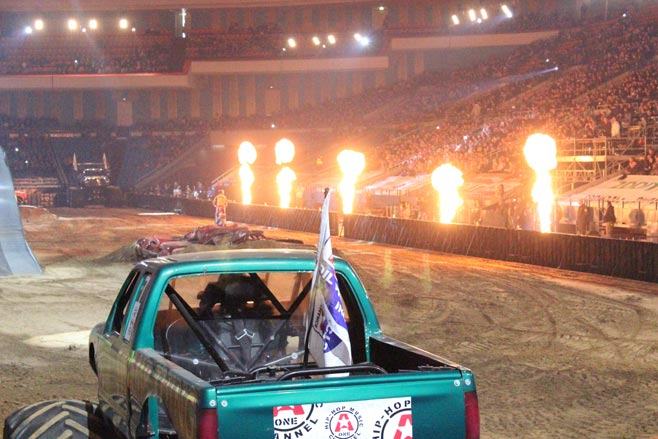 Flames helped to entertain a surprisingly urbane crowd of Muscovites.

The events coming to Moscow and St. Petersburg now are of a more ­commercial kind, part of an international motorsport world with racing teams pulling in hundreds of millions of dollars each year. This October will feature the first Formula One grand prix in Russia in which top drivers will race on a track in Sochi that circles facilities developed for the Winter Olympics, aiming to draw in Russian fans.

Monster truck also has hopes that Russian viewers will help continue to grow an event that has been gaining popularity since its beginnings in the 1980s Midwest. Peter Nyman, the Swedish driver of the monster truck Thor, said he had a "hunch" that the sport has found a future in Russia and the Baltics, saying "I think it is easier for us to become more popular here than in Germany," where shows were met with less-than-stellar ticket sales.

Though "Western" products often come to Russia in an attempt to coerce rubles out of moneyed Muscovites, Saturday's crowd of parents and children — though most likely more urbane than stereotypically rough-around-the-edges American monster truck fans — lacked the creative-class air of hipsters clamoring for new iPhones.

Dmitry Kostanets, a young man attending the show with his girlfriend, said that Russians do have the idea of monster truck racing as a foreign or "Western" practice, though he added, "that is not the problem, the problem is a lack of resources" and exposure needed for events like Monster Mania to get real traction.

The monster truck pilots themselves — from Britain, Sweden and Finland — formed an international, if somewhat Scandinavian-leaning, group and said that drivers from the U.S. and Europe were working together to advance their craft. They were joined by a trio of Russian motorcycle riders who performed tricks in intermissions between the monster truck events, though fans at the show like Denis Fedykov hoped that Saturday's show would eventually lead to a Russian monster truck star. "Maybe in about five years one of ours" will be driving, he said.