Editor's Note: This is the first article in a series that will focus on three sites of memory in the new Ukraine. The three articles examine connections between memory and national identity and discuss the ways that perceptions of the past have produced debates connected to the ongoing crisis.


In Kiev's center, next to the Pecherska Lavra and looming above the Dnieper river, stands a new monument dedicated to remembering the famine, or Holodomor, of the early 1930s. It is probably not the site President Vladimir Putin had in mind when he declared in his March 18, 2014 speech about the annexation of Crimea that "Kiev is the mother of Russian cities." Putin's speech stressed the common heritage Russians and Ukrainians share, essentially articulating his view that Ukraine is not a separate nation. Yet the monument in many ways is an important one for understanding the current conflict between the two nations, for this is also a war over the past and ways to remember it. Kiev's monument illuminates the way many Ukrainians have remembered the Stalin era and how this memory differs from that held by most of their Russian neighbors.

Opened in 2008, the monument is officially known as the Memorial in Commemoration of Famines' Victims in Ukraine. In addition to remembering the horrific famine of 1932 to 1933, which killed between 2.5 and 7.5 million people — scholars continue to debate the total — the memorial also commemorates famines in 1921 to 1922 and 1946 to 1947.  The site was built after a 2006 law declared the famine to be a deliberate act of genocide against the Ukrainian people. The vote was contentious, but since 2006 the majority of Ukrainians accept its basic premise. In November, at the 80th anniversary of the famine's end, a poll showed that about 65 percent viewed the famine as the result of Stalin's actions, the highest number since the memorial opened.

Designed by the artist Anatoly Haidamaka and the architect Yury Kovalev, the memorial's centerpiece is the Candle of Memory, which stands nearly 30 meters tall over the Hall of Memory. Around the entrance are Angels of Sorrow and a single statue of a young girl called Bitter Memory of Childhood. Decorated with crosses, the candle also has three storks flying out from it, indicating that Ukraine has survived and been reborn as a result of its suffering. Within the Hall of Memory, visitors can light their own candle in memory of the victims, watch a film about the Holodomor, read through the National Book of Memory of Famine's Victims, or watch the names of victims scroll across a seemingly never-ending list. In 2011, the number of names had reached nearly 2 million. The memorial's official website now puts the number at 3.9 million.  Throughout the hall, Ukrainian folk symbols decorate the walls. 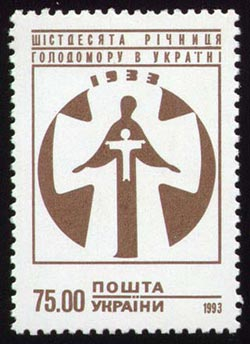 The main goal, as tour guide Oleksandra Monetova wrote in an e-mail, is to present the facts about the famine and to let visitors "form their own perceptions" about the Holodomor's meanings. As a statement about Ukrainian nationhood and the suffering of Ukrainians at the hands of Moscow's government, however, the memorial is an effective one, made all the more so when you exit and see the Black Board Alley, which provides the names of 14,000 Ukrainian villages affected by the famine.

The national memorial speaks to the rapid change in Ukrainian remembrance about the Stalin era after 1991. The memory site speaks not only to the view of the famine as a genocide against the Ukrainian people, but also to the attempts by the Soviet state to erase the memory. As the historian David Marples has argued, the Holodomor has come "to symbolize the period of Soviet rule at its cruelest, and Ukraine's persecution at the hands of a centralized Soviet regime based in the capital of Russia." While scholars still debate whether the famine was a genocide, the Ukrainian government under ­Viktor Yushchenko considered it to be and pushed for the 2006 law.

This designation initiated a memory war that has not abated, providing important foundations to the current conflict between Russia and Ukraine. Viktor Yanukovych opposed the designation of the Holodomor as a genocide, arguing that the famine indiscriminately killed other groups too.  In February 2010, on the day of his inauguration, Yanukovych deleted the link on the president's official website to the Holodomor. The former president established a different narrative about the Holodomor, seeing it instead as a tragedy, a crime, or even an "Armageddon." These are the words he employed when he visited the memorial as president.

Kiev's candle is therefore an important symbol in the current crisis: it illuminates the battle over the past's meanings between Ukraine and Russia. Viewing the Holodomor as a genocide is not a remembrance practice the Kremlin supports. In his speech about Crimea, Putin declared Ukrainians and Russians to be "one people" and decried Ukrainian politicians who have used the past for political purposes to "divide the nation." He has never visited the memorial, unlike Dmitry Medvedev, who visited the site in 2010 when he served as president, after refusing in 2008 to accompany Yushchenko.

Kiev's candle is a site of memory dedicated to one of the foundation events for the new Ukrainian nation and a reminder that many in the country see themselves as a separate people with a particular view of the recent past. Understanding the Holodomor is a central part of building an independent Ukraine, as Alexander Motyl has argued in an insightful 2010 "World Affairs" article, because "it remains the single greatest catastrophe endured by Ukraine during Soviet rule."

This is the memorial's major task, in Monetova's words, "it has always been a special place for everyone whose family suffered during the famines in Ukraine, for everyone interested in those events, and just for everyone who loves Ukraine or wants to find out more about its recent history." The site recently hosted an exhibition entitled "Ukraine has Risen Up!"  Featuring photographs from the Maidan demonstrations, the exhibit, in the words of one photographer who spoke at its opening, is dedicated to showing how Ukrainians are continuing to fight for the freedom they first won in 1991.

Stephen M. Norris is Professor of History and Assistant Director of the Havighurst Center for Russian and Post-Soviet Studies at Miami University (OH). Contact him at artsreporter@imedia.ru