A packed house will gather at the Vakhtangov Theater on Thursday night to celebrate and honor an annual event that has become an institution in Russian culture. I’m talking about the Golden Mask Festival, which marks its 20th anniversary this year.

Starting as merely a Moscow awards ceremony in 1995, it quickly expanded into a showcase for all of Russian theater. In recent years it grew significantly bigger than that, as it has included several offshoot festivals within the festival that feature new writing, productions from abroad, and homegrown Russian shows of interest which, for one reason or another, were not nominated for awards.

In the early years, the Golden Mask Festival would run for about two weeks. These days it is spread out over almost three months, and even that doesn’t come close to exhausting its offerings. The Golden Mask is now a production company and touring organization, which sets up festivals throughout Russia and in neighboring countries.

But for the average theatergoer Golden Mask still means those three weeks, give or take a few days, in late March and the first half of April, when Russia’s theaters and theater artists descend on Moscow to compete for one or more awards offered in 34 categories. This year the winners will be announced at a predictably flashy closing ceremony on April 18 at the Bolshoi Theater.

As we speak, the competition segment of the festival is finally getting underway in earnest. Many of the musical and dance theaters have already come and gone with their offerings — it is virtually impossible in this day and age to schedule so many huge productions in one short period of time — but the vast majority of nominees in the drama and puppet categories are still to come.

Here are some pertinent facts and figures about the dramatic productions in this year’s festival.

The sheer numbers of nominees this year are breathtaking. For example, 20 directors are nominated for the best director award. Actually, there are 22 nominations because two directors — Lev Dodin and Yury Butusov — are nominated twice.

Dodin, of the world-famous Maly Drama Theater in St. Petersburg, is bringing two recent works to town. His renditions of Henrik Ibsen’s “An Enemy of the People” and Friedrich Schiller’s “Love and Intrigue” play at the Maly Theater between April 8 and 12. “Love and Intrigue,” incidentally, is one of the most nominated shows, garnering a total of six potential nods, including two best actress nominees.

Also coming from St. Petersburg is Valery Fokin’s production of “Liturgy Zero” for the Alexandrinsky Theater. This dramatization of Fyodor Dostoevsky’s novella “The Gambler” is another in a long line of works that the director has created with composer Alexander Bakshi. In fact, of all the current nominees, Fokin is the only one with direct ties to that first Golden Mask awards program in 1995. His now-famous production of “A Hotel Room in the Town of N,” also created with Bakshi, was named the first-ever Golden Mask best production.

In all, St. Petersburg placed six offerings among the total of 22 shows competing for honors among dramatic works in two categories — large-scale and small-scale works. 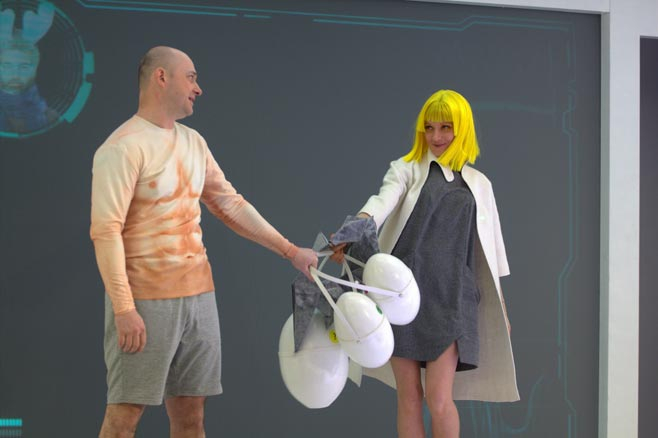 Volkostrelov, who grabbed a special jury prize at last year’s Golden Mask, figures in another category as well. He is one of three directors, including Semyon Alexandrovsky and Alexander Vartanov, whose production of Mark Ravenhill’s “Shoot/Get Treasure/Repeat” for the Post Theater of St. Petersburg is one of six nominees in the Experiment competition. “Shoot/Get Treasure,” which runs six hours and is probably best described as a theatrical installation, plays April 5 and 6 at the Moscow Museum of Contemporary Art on Gogolevsky Bulvar. Note that both shows begin at 5 p.m.

Also vying for awards in the Experiment category are: “Akyn Opera” from Moscow’s Teatr.doc; “Alice and the State” a joint production of the Meyerhold Center and Liquid Theater; “A May Night” from the Moscow Puppet Theater; “While You Are Here” from Liquid Theater; and “Distant Closeness” from the Playwright and Director Center.

“Distant Closeness” is a project mounted by Gerd Hartmann and Andrei Afonin with the Krug-II studio and the Goethe Institute in Moscow. It is based on the writings of Russian authors facing mental or psychological challenges, and it features performances by actors with physical challenges working in tandem with professional performers. It plays April 3 and 4 at the Playwright and Director Center.

Productions from seven regional centers are among the festival entries. Some are making rare appearances, such as the Kamal Theater of Kazan, with its production of Jon Fosse’s “A Summer Day,” about a woman whose husband went to sea and never came back, and the Savin Theater of Lysva, with Georgy Nikolayev’s “Cloud Heaven,” about what it takes to live in Russia today.

Several of the regional theaters are perennial guests at Golden Mask, including the Volkov Theater of Yaroslavl (“The House of Bernarda Alba”), Krasny Fakel of Novosibirsk (“Onegin”), and the Krasnoyarsk Theater Yunogo Zritelya (“The Snow Queen”). The Volkov Theater, headed by director Yevgeny Marcelli, was last year’s winner of best large-scale production.

Not surprisingly, Moscow puts forth the largest number of nominated shows, with nine. Some are sure to be front-runners, such as “Brothers” from the Gogol Center, “Eugene Onegin” from the Vakhtangov Theater and “The Good Person of Setzuan” from the Pushkin Theater. Each of these shows has topped several best-of lists since they — as all other shows involved in the Golden Mask 2014 — premiered during the 2012 to 2013 season.

Rimas Tuminas’s “Onegin” at the Vakhtangov ties Dodin’s “Love and Intrigue” as one of two elite shows receiving a hefty six nominations out of a possible eight categories.

Four shows pulled down four nominations each — Alexei Borodin’s production of Eugene O’Neill’s “Mourning Becomes Electra” at the National Youth Theater; Anatoly Ledukhovsky’s “Vassa,” an interpretation of a play by Maxim Gorky at the Vedogon Theater in the Moscow suburb of Zelenogorsk; Butusov’s staging of Bertolt Brecht’s “The Good Person of Setzuan”; and Volkostrelov’s “Delhi Dance,” based on a play by Ivan Vyrypayev.

But this only scratches the surface of what Golden Mask has on tap. Surely it is now bigger than it has ever been before. We’ll know whether that means “better,” too, come April 18.