As protests over Ukraine's EU integration heated up in Kiev on Sunday, and protesters used a tractor in an attempt to storm the presidential administration, analysts in Moscow shrugged off the tension as just a bump in the road in Russia-EU relations.

Ukrainian President Viktor Yanukovych's outright refusal to sign a free trade pact with the European Union on Friday brought emotions to a boiling point between Russia and the EU, triggering a flurry of barbed words and accusations from both sides, but analysts say the spat is unlikely to result in any dramatic changes.

The two sides are too interested in mutual cooperation to put the relationship at risk, they said.

Almost all high-ranking EU officials have resorted to using loaded Cold War rhetoric after Ukraine's unexpected U-turn, blaming what they called brutal Russian interference into foreign policy of a sovereign state for the outcome at the Vilnius summit.

"Actions taken by Russia [toward] the Eastern Partnership are incompatible with how international relations should function on our continent in the 21st century," Herman van Rompuy, the European council president, said in an unusually straightforward comment.

His counterpart, Jose Manuel Barroso, was equally harsh, saying that "the times for limited sovereignty are over in Europe," hinting that Russia still saw Ukraine as its little brother.

These sentiments were echoed by more than 100,000 Ukrainians who gathered on Kiev's main squares on Sunday to demand Ukraine's integration with the EU. The protest was intensified after a police crackdown on Saturday saw dozens of pro-EU demonstrators and police injured.

Many of those protesting have blamed Russia for tarnishing their European dreams.

Officials in Moscow were quick to respond to the accusations.

Sergei Naryshkin, the speaker of the Russian State Duma, said the West had put "unprecedented pressure on Ukraine." 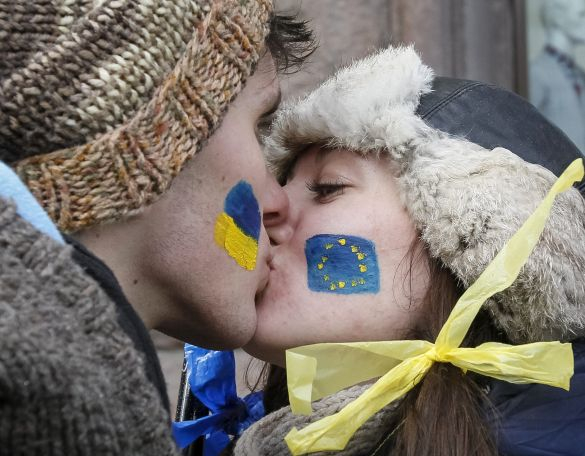 Gleb Garanich / REUTERS
Students kissing at a rally in Kiev on Friday in support of EU integration.

Earlier, the Russian Foreign Affairs Ministry accused the EU of putting the blame on Russia "for the problems that appeared in Ukrainian society due to the policy of continuous pressure exerted on Ukraine and other states in the framework of the Eastern Partnership initiative."

In an apparent attempt to soothe tensions, Yanukovych offered to discuss the issue of EU integration on a trilateral basis with the participation of Russia, the EU and Ukraine. President Vladimir Putin welcomed the initiative, but European representatives firmly rejected it.

"We are talking about bilateral agreement between the EU and Ukraine. How can we involve a third country in it? We cannot allow a third to have a veto," Barroso said.

And in Ukraine, Yanukovych's words did nothing to appease protesters, as opposition leaders lashed out at the president.

On Sunday night, leader of the Ukrainian opposition and heavyweight boxing champion Vitali Klitschko called on Yanukovych to resign.

Former economic minister Arseniy Yatsenyuk said violent clashes at Sunday's rally had been orchestrated by Yanukovych to give him the pretext to declare a state of emergency.

Members of the nationalist Svoboda party broke in and occupied Kiev's City Hall and held a press conference there. Ukraine's Interior Ministry said it was keeping the situation under control, however.

Yanukovych will pay a visit to China this week and then go to Russia to develop a "roadmap for cooperation," which will stipulate "the restoration of a normal trade regime," Ukraine's Prime Minister Mykola Azarov told Ukrainian TSN TV news network on Sunday.

While many observers say Russia-EU ties have reached an all-time low as a result of the fight over Ukraine, analysts say the bilateral relationship has its own distinctive dynamic to help it weather the storm.

"This incident will definitely be remembered, but the situation is that the EU is very interested in cooperation with Russia," said Viktor Mironenko, head of the Ukrainian Research Center at the Russian Academy of Sciences.

"What these events have demonstrated is that there needs to be an overarching all-European platform to solve these problems across borders," he said.

Vygaudas Usackas, head of the EU's delegation in Russia, told Kommersant newspaper on Thursday that Russia and the EU should "stop complaining and blaming each other" and that the EU was in favor "of a Europe without dividing lines."

"The Russia-EU relationship has its own logic and its own inertia," said Alexander Tevdoy-Burmuli, a researcher at the Institute of Europe at the Russian Academy of Sciences.

"The case of Ukraine is only an additional element in it, but this time the EU has suddenly discovered that Russia is not always the weaker part in the dialogue," he said.

Russia and the EU will hold another bilateral summit next January in Brussels, where the parties may sign a visa facilitation agreement and also demonstrate progress on moving toward visa-free travel and a new partnership and cooperation agreement.

German Chancellor Angela Merkel said the subject of Ukraine would be discussed during her next meeting with Putin, while van Rompuy said the issue would be on the agenda of January's Russia-EU summit.