The Moscow-based photography collective Troyka opened their first solo exhibition in the small hall of the Artplay Design Center on Saturday.

The collective, which describes its work as ethnographical research, comprises the photographers Olga Rodina, Anastasia Soboleva and Lena Tsibizova. They met in a photography course at the British Higher School of Art and Design and have continued to work together after graduating.

Troyka's work is something of a personal side project, as the photographers are already well-known individually for their commercial work in Moscow.

"We understood that we have something in common. We like to travel, meet people, especially in Russia, people with the same language, but sometimes completely different, we try to explore and understand their life, values, and capture that," says Tsibizova, explaining why they decided to work as a collective.

"In practice, Russia is huge, so we usually separate our locations of exploration, doing different projects but connected with one theme." 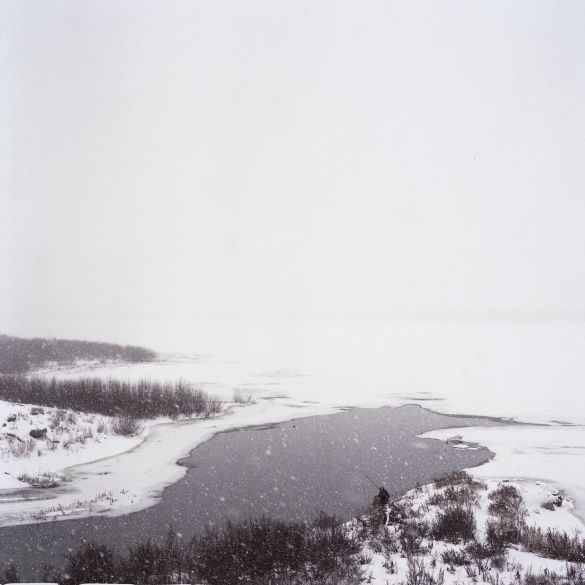 The wide expanse of a winter landscape near the Siberian city of Tomsk.

The exhibition brings together 30 photographs and three videos culled from different series that they have worked on over the past few years.

Though they work individually, there seems to be a connection between the photographers, at least aesthetically, in their exploration of the Russian landscape and environment that extends far beyond Moscow.

There is a dreamlike, pensive quality about their photographs, which often are shot in cold, muted tones that bring out even more distance from the wide landscape shots and poetic portraits of individuals.

Old believers and Buddhists in Ivolginsky Datsan, Buryatia, living above the Arctic circle in the city of Murmansk, the Valaam archipelago in the republic of Karelia, and the Daursky nature reserve on the border between China and Mongolia are just some of the subjects that have been the focus of their explorations.

Tsibizova tells me: "We know about some cliches in other world about Russia, that it is dirty, wild, full of criminals and so on. Of cause sometimes it is, but there are too many other sides, its beauty and uniqueness that we want to talk about."

This certainly comes through in their work, which does not play into stereotypes and is not kitsch. Nor are they utopian or symbolic; the result is a very distanced, documentary-like documentation of a Russia that modernization has missed. They do not show a Russia where time has stopped, but rather, the persistence of tradition, where culture is not so quickly sacrificed for material or other comforts.

As opposed to a context of economic and social change that has defined much of the photographers lives, Tsibizova says photographing their subjects, "is like you have traveled through time, the people live like hundreds years ago, saving their culture, sing folklore, cook traditional food. They are very friendly, communicative, for Muscovites. It is exotic, but anyway we felt a connection between us."

Despite the impartial nature of their photographs, Troyka's exploration of rural Russia and the country's agrarian and pastoral roots seems more of a personal journey into how young Russians see their connection with their environment.

According to Tsibizova: "In the end, it is all about our homeland. In future, we will continue our work, but the end is somewhere very far away."

Works by Troyka are currently on display in the small hall of the Artplay Design Center, 10 Nizhnyaya Syromyatnicheskaya Ulitsa, Bldg. 7. Metro Kurskaya. For more information, see the Troyka website.

Political unrest in Russia and contested elections in the U.S. are coming soon to a theater near you.
SPUTNIK V

From Skepticism to Relief: Why I Got the Russian Vaccine

“I sank into a strange, semi-feverish state.”
weekend kitchen

Jennifer Eremeeva gives us a recipe for the beloved meatballs found in every Russian freezer.
NIPPY DIP

Both believers and non-believers take the plunge.