This weekend, The Moscow Times spoke with Ivan Vyrypayev, artistic director of the Praktika Theater, and actor Cazimir Liske, both of whom are working on Praktika's upcoming adaptation of Ken Wilber's "Grace and Grit," the international premiere of the English-language play.

"The great dilemma about being human is the fear of death," said Cazimir Liske, a Moscow-based American actor. "If you are willing to look for practices and spiritual structures that help you manage your fear and help you come to terms with death … changing your perspective of death from one that is the end of you."

Liske was trying to explain the heavy ideas behind philosopher Ken Wilber's novel "Grace and Grit," published in 1989, which chronicles the five years he spent married to his wife, Treya, before her death from cancer. Its deep philosophical and psychological themes set it apart from any other "cancer novel," but despite the popularity of this book, it has never been brought to the stage until now.

Ivan Vyrypayev is the artistic director of Praktika Theater — who describe themselves as "probably the only theater that sharply addresses political and social issues in Moscow." Vyrypayev is a big fan of Wilber and, as it turns out, of death as well. "Death is a topic I've been working with for 20 years already — since I started working in theater. All of my texts are about death … Death is the thing that truth seekers are always interested in."

He traveled to  home in Colorado along with Liske and Polish actress Karolina Gruszka last summer to meet and discuss their ideas about making the book into a play.

"When we met Ken this summer, we told him about our approach to bringing it to the stage, and Ken totally supported us, he said it was exactly the one we should choose. So we were very happy that our views on the adaptation perfectly coincided with author's views," Vyrypayev said.

What is interesting in this production is that no actors are playing specific roles and no scenes are being acted out. There are only two actors, and on stage they read directly from the text. While simple enough, one of the hardest parts was condensing the piece coherently, keeping it short and sharp as the book dealt with some heavy themes, all without running over 2 1/2 hours. In the end, only 51 of the book's 600 pages will be read, all in English. 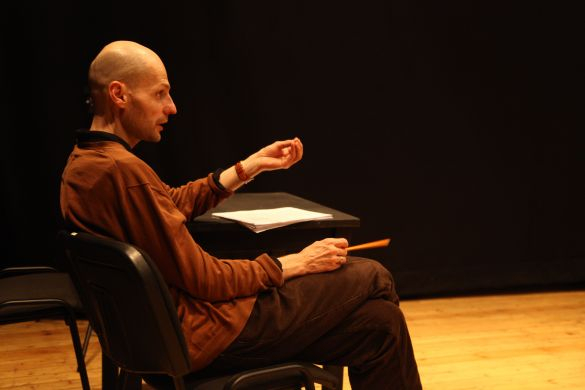 Liske tells me that this decision was made very late during the rehearsals, where they just switched to English to hear how it sounded. "That was a huge shock, because we were preparing to do it in Russian and trying to figure out how."

Staging the premiere of such a book in Moscow seems apt, given the unique attitude that Russians have towards life and fate. Liske explained that "the idea we're trying to get to is that, yes, you can't change your fate, but you can change your quality of your life and the quality of the lives around you …"

If you are not familiar with the text, he guarantees a life-changing experience, while Vyrypaev is more reserved. "I am not ready to discuss this topic in the interview, because I am only the artist, not the guru, not the sage. So all I can say about life and death will be on the territory of arts."

Grace and Grit has its first run from Nov. 10 to 13 at Praktika Theatre, 30 Bolshoi Kozihinsky Pereulok. Tickets and information can be found at praktikatheatre.ru.