Correction appended
Hard as it is to believe, on a Wednesday evening in November a soccer stadium in northwest England will literally be the centre of the world for tens of millions of soccer fans across Russia.

The multinational and polyglot Manchester City will first play CSKA Moscow on Oct. 23 at the Khimki Arena in Moscow, with the second match at the City of Manchester Stadium on Nov. 5. Russian soccer fans may recognize the ground as a landmark in the country's soccer history — it is the same venue where Zenit St. Petersburg won Russia's last UEFA cup trophy in May 2008, beating Scotland's Rangers.

The encounter between the once unfashionable and now cash-rich City and what was once the Soviet's Army's official team is the latest instalment in the story of Anglo-Russian soccer encounters and an intertwining of two soccer cultures that goes back 55 years, often in some unexpected and surprising ways.

The history of international fixtures between the two sides goes back to the days of the Soviet Union, yet England and the Russian Federation have only met twice in competitive matches, both in 2007 during the European Championship qualifiers. While England won the first game, Russia took the second, and England's subsequent failure to qualify for the following year's European Championship helped hasten the demise of England coach Steve McClaren.

Enter Fabio Capello, an Italian who managed the England side to the 2010 World Cup but impressed no one by failing to get beyond the last 16. Capello's tenure abruptly ended in February 2012 and since July of last year, he has been the Russian head coach. Ironically, his first competitive match in charge of Russia was against another U.K. team — Northern Ireland. 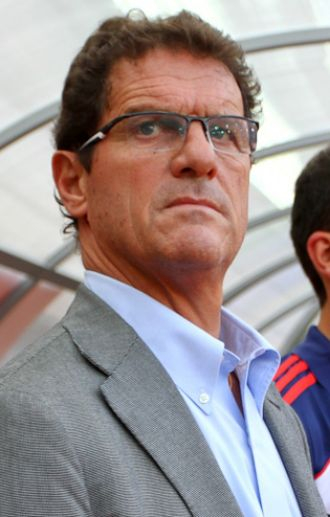 Capello has taken Russia to the top of World Cup qualifying Group F, where it sits three points clear of perennial cup qualifier Portugal with one game left to play against upstart Azerbaijan in Baku on Tuesday. Any points from the fixture and Russia is through to its first World Cup since 2002, though it can also get through on a loss and a Portugal win if the Iberian side does not make up substantial ground on goal difference.

England will play a home game on the same night, hoping to join Russia in automatic qualifying after drawing four times in a group that includes post-Soviet bloc countries such as Tuesday night opponent, Poland, as well as Ukraine. While the Russians' qualification may mark a re-emergence onto the global stage, England is expected to return to the Cup year in and year out.

Off the World Cup stage, club fixtures between the two nations have produced few memorable encounters. No English and Russian clubs have met in the Champions League final to date.

However, the Premier League's finest did come to the Russian capital on May 21, 2008, when Muscovites had the opportunity to witness the first-ever all English Champions League final at the Luzhniki Stadium. Manchester United held Chelsea to 1-1 after extra time, with the match continued with penalties up until midnight Moscow time. It proved to be the zenith of Sir Alex Ferguson's career, lifting his second Champions League trophy for United.

English soccer has been on the most incredible journey these past 25 years, from hooliganism and muddy pitches to becoming a global brand. The Premier League transcends borders with hundreds of millions of viewers in 200 countries. There is massive overseas capital invested in the game, and the league is a polyglot convergence point for European, South American, American and African talent, and a lot of expatriate Russian money.

Alisher Usmanov, a London-based tycoon who currently holds the title of wealthiest Russian, is a significant shareholder in the Arsenal soccer club, which famously made a club record transfer by bringing in Russian forward Andrei Arshavin from Zenit St. Petersburg in 2009. Arshavin eventually ended in disappointment for Gunner fans, But fellow Russian Roman Abramovich has been the most high profile part of the revitalization of the English soccer brand.

Few in Britain had heard of Abramovich until the billionaire arrived at Chelsea FC in July 2003 and bought the London club for £140 million. He replaced Claudio Ranieri with Jose Mourinho, who in 2005 promptly delivered Chelsea's first league title in more than 50 years then repeated the achievement in 2006. But the relationship ended in 2007 following a lackluster group-stage Champions league performance. Several other managers later, with Roberto Di Matteo, Abramovich achieved his dream and lifted the Champions League trophy in May 2012, after a Chelsea penalty shoot out defeat of Bayern Munich in Munich.

Abramovich is 5th on The Sunday Times 2013 list of Britain's richest people with an estimated wealth of £9.3 billion. Spending £111 million in his first year, it was extravagant in a way the league had never seen before. In January 2011, the club paid a British record transfer fee of £50 million for Fernando Torres from Liverpool.   Chelsea remain, over the past decade, the highest spending of all the Premier League sides. Not for nothing is Stamford Bridge known as Roman's Empire.

Correction: An earlier version of this article stated that Zenit's win at Rangers in 2008 was Russia's only UEFA cup finals victory. CSKA won the cup in 2005 by beating Portugal's Sporting Lisbon in Lisbon.