AvtoVAZ's first resident foreign design director, Steve Mattin, said the car giant needed to follow the lead of Volvo and Kia in wrenching the Lada from its bleak past.

The British national credits himself for creating a more exciting vehicle out of the boxy Volvo after taking charge of design at the Swedish auto heavyweight from May 2005 through May 2009.

"My goal there was to emotionalize the brand," he said in an interview. " I have to do the same thing here at AvtoVAZ."

Prior to Volvo, he worked at Mercedes-Benz for 17 years, ultimately making his way up through the ranks to the position of the brand's senior design manager. He started his job at Russia's largest car manufacturer in October 2011 as the company plotted a course to remain a strong rival to foreign brands that were coming on strong.

In the most notable public premiere since then, Mattin, 48, presented the Lada Xray concept car at the Moscow Auto Show in August. Otherwise generally keeping a low profile, he agreed to an interview on the sidelines of a student car-design contest at the Moscow State Machine-Building University.

Lack of design evolution at the biggest Russian carmaker is obvious, with models like the Lada 4x4, formerly called Niva, having remained virtually the same during its 37-year existence, Mattin said. A stronger emphasis on that part of the business could turn the situation around, just like it powered Kia's stellar ascent to popularity, he said.

"No one was taking Kia seriously 10 years ago, and now they have success in all segments," Mattin said. "They really put a focus on design, making a huge impact by changing their image. That's the sort of step we need to make at AvtoVAZ."

Mattin's Xray, which features X-shapes across the grille and on the body sculpting, represents his take on Russia as a country of contrasts, social and seasonal.

"It gave a very bold look for the front end, something that was very distinctive and individual," Mattin said.

The concept model also drew a thick line under the current styling of the Lada, introducing a totally different vision of the brand.

"I'm here to make a break from traditions," Mattin said.

In fact, it's Lada's previous slow progress in changing its appearance that served as a motive for him to accept the AvtoVAZ job offer.

"That actually gave me more opportunity to make a bigger step," Mattin said. "At some companies you are very restricted due to the strong design heritage. You can only develop the grille so much in each generation. Here at Avtovaz, that is not the case."

The new design seeks to convince that the car is robust enough for the country's road conditions, he said. It also manifests simplicity, in a delicate balance. The idea is to put more emotion in the product. 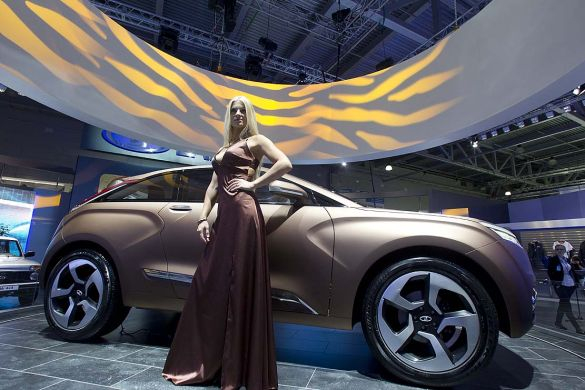 Sex appeal is dripping from this prototype at the recent Moscow car show. (Igor Tabakov / MT)

One of the reasons to do the Xray concept was to show that AvtoVAZ was moving to expand with crossover and SUV oriented vehicles, which are some of the fastest growing segments.

Intended for the Russian market, the new cars, expected to hit the market in 2016, will also be "very appealing" outside of the country, Mattin said, because they will sport the change in proportions and general improvements.

A minicar is not the company's focus at the moment. Mattin was tight-lipped about the future of the 4x4 vehicle, saying only that, "When you have such an iconic product in the portfolio, it's inherent that you continue that."

Most of the company's approximately 120 designers and modelers work out of AvtoVAZ's plant in the Volga River town of Tolyatti. Helping the main team is a smaller studio in Moscow, which opened in June last year and has recruited eight people so far.

Mattin conceived the studio as a breeding ground for alternative ideas and to be a beacon for Russian talent, which would be reluctant to settle in the automaker's hometown in Russia's hinterland. Belgian designer Thomas Bigwood, who is on an Avtovaz contract from Renault, runs the studio.

"Moscow is, let's say, a more inspiring place from a cultural perspective," Mattin said. "It is certainly a more attractive location from a pure inspiration standpoint.

"If changes happen, they all start in Moscow first. You also have a completely different surrounding here: Every brand is visible in Moscow from the very simple cheap brands all the way up to the super exclusive."

Skilled Russian car designers prefer to scour the world in search of attractive opportunities, coupled with the luster of foreign brands and lifestyle. These people now have an option to come back and land an equally enthralling job at AvtoVAZ in Moscow, Mattin said.

"You can make a bigger impact at Lada than you can probably at those foreign brands, just because we are at that point of change and it's a small team," he said.

Foreign designers are not always a good bet because they generally shy away from living in a country with an image like Russia's, Mattin said. He added, though, that the country was "very different' from its perception when you are here. In Tolyatti, there is just one other foreign designer, a French national, working on contract from Renault.

The Moscow studio has the task of generating alternative opinions and viewpoints that refresh the thinking of the other team and ultimately raise creativity, Mattin said. He works one day a week in Moscow, enjoying the opportunity to step back from the normal routine and think strategically.

The team in both offices employs the latest digital technology, modeling digitally and sketching on electronic tablets. The initial push to upgrade the technology came from Anthony Grade, a senior Renault employee who was acting as design director on and off for a five-year period before Mattin arrived.

Even though the Renault-Nissan alliance is a major shareholder of AvtoVAZ, the Lada maker is keeping a vigil over its design sovereignty. Mattin said he went to Renault's main office three or four times a year to exchange information and opinions about what each of the brands is doing design-wise, including meeting with Renault design chief Laurens van den Acker.

Russian President Vladimir Putin will mark his 70th birthday Friday with little fanfare as the war in Ukraine, which has killed tens of thousands and plunged...