It is a theatrical feast for theatrical gluttons. This year, in its 11th running since the inaugural festival in 1992, it will span eight weeks to the day, beginning Sunday and concluding Sunday, July 14. During that time Muscovites will have the opportunity to see 80 performances of 19 productions from twelve countries.

Over the period, Muscovites will have the opportunity to see 80 performances of 19 productions from 12 different countries.

It's true that at the center of the summer event is Moscow's presentation of some of the world's leading theatrical achievements. But this year a homegrown aspect carries special significance. From Monday through to July 10, an entire program of 20 productions connected in some way with the great director Pyotr Fomenko, who died last August at the age of 80, will be on display.

Aside from 12 productions by Fomenko himself, all still in repertory at the Fomenko Studio, there will be works by his students Ivan Popovsky, Nikolai Druchek, Kirill Pirogov and Mindaugas Karbauskis, as well as by his former colleagues Sergei Zhenovach and Yevgeny Kamenkovich. These two taught and directed alongside Fomenko in the formative years of the Fomenko Studio, and both have emerged as leaders in Moscow theater.

But that isn't the end of what the Chekhov Festival has to offer this year. Already underway is a third program, which is taking selected productions to various cities all over the Russian regions.

Three shows by British director Declan Donnellan were performed in April in the cities of Samara, Yekaterinburg and St. Petersburg. Five more from Great Britain, Israel, Belarus, France and Switzerland will stage plays in such cities as Voronezh, Novosibirsk, Khanty-Mansiisk and Riga, the capital of Latvia, between June 4 and July 7.

Having said that, it is still primarily Moscow that will throw open its arms most widely to the world of theater in the next two months.

As has become the rule of late, the offerings will be heavy on dance, musical, non-verbal and visual spectacles. Old friends such as Matthew Bourne, Josef Nadj and Robert Lepage, all of whom have ignited past festivals, will be returning with new work.

James Thierree, the grandson of Charlie Chaplin and an exquisite performer who combines mime, circus and dramatic acting, will make his first appearance in Moscow since the Chekhov Festival in 2009 to open this year’s events. He will present a one-man show entitled "Raoul," described by The Guardian as a "75-minute existential crisis." The show runs from Sunday to Friday on the main stage of the Mossoviet Theater.

Thieree's sister Aurelia Thieree returns to Moscow from June 3 to 5 with her own three-performer show, "Murmures des murs," at the Pushkin Theater. For the record, the two siblings' mother, Victoria Thieree-Chaplin, is a major force behind the scenes of both productions. She conceived and directed "Murmures" and was the designer of costumes and animal puppets in "Raoul."

'Murmures des Murs' (Murmuring Walls) has been well received by international critics, being described as elegant, super-imaginative, farcical and mysterious by the Jerusalem Post. 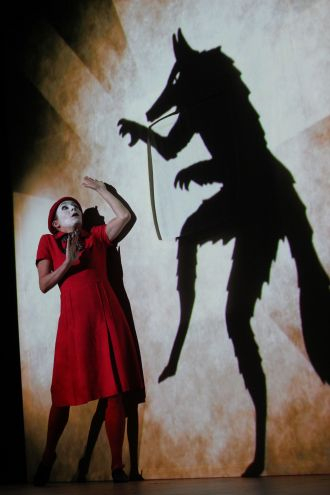 Ingrid Lausund's international hit "The Office,"playing May 24 at the Pushkin Theater, will be one of the few dramatic shows in the festival. Directed by Yekaterina Averkova for the Janka Kupala Theater of Minsk, it tells the story of some office workers whose competitiveness and tangled interrelations lead them into extreme regular conflicts, and some conflicts of interest.

A block of four music-based shows round off the offerings for May.

Vladimir Pankov's "Orpheus Syndrome," a production of Theatre Vidy-Lausanne in collaboration with Pankov's Moscow-based SounDrama Studio and the Chekhov Festival, will perform five times between May 27 and 31 at the Pushkin Theater. Based on writings by Vladimir Mayakovsky and Jean Cocteau, this is part opera, part drama, and part visual extravaganza.

Israeli dancer and choreographer Ohad Naharin, working with the Batsheva Dance Company of Tel Aviv, comes to town for performances of two productions – “Deca Dance” and “Sadeh21” – from May 27 to June 2 at the Mossoviet Theater. Writing about “Deca Dance,” Chicago Sun-Times critic Hedy Weiss declared that “Naharin creates a richly textured, highly individualistic collage of historical references, individual emotions and ‘psychodramas’ that are ripe for interpretation.”

David Marton's "Harmonia Caelestis" (Celestial Harmony) for the Burgtheater of Vienna is a loose, musical interpretation of the novel by Hungarian writer Peter Esterhazy. The work explores the rise in prominence of the author's forebears during the period of the Austro-Hungarian empire and their subsequent demise during the Communist era.

"David Marton used my novel merely as a point of departure and henceforth was thinking only in terms of the stage of Burgtheater," Esterhazy told Chekhov Festival organizers."For an artist this would be only natural. What came out of it seems truly grandiose to me." 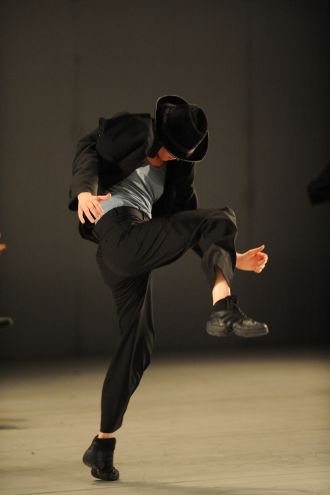 A boy performing in the diverse "Deca Dance," staged by an Israeli group.

Various forms of dance will take center stage in June. These include two delicate works from Taiwan — "Song of Pensive Beholding" by the Legend Lin Dance Theater (June 5 to 8) and "Nine Songs" by Cloud Gate Theater (June 6 to 10) — as well as dance pieces created by several European choreographers.

The France-based Josef Nadj offers up "Sho-bo-gen-zo," a dreamlike interpretation of things Japanese for the National Choreography Center of Orleans, on June 18 to 21. Running more or less simultaneously is "6,000 Miles Away," a three-part piece created for Sadler Wells, London, and dancer Sylvie Guillem by star choreographers Jiri Kylian, William Forsythe and Mats Ek. It opens June 19 and runs until June 25.

Suzanne Andrade's "The Animals and Children Took to the Streets,"originally performed by the London-based 1927 company, is a story of social unrest in which animation and music meet live actors. It plays June 7 to 12.

"Sleeping Beauty by Matthew Bourne" by the London-based 'New Adventures' group and "Playing Cards I: Spades" by Robert Lepage's Ex Machina of Quebec, are primed to be festival highlights.

Bourne's bold reinterpretation of Tchaikovsky's classic ballet "Sleeping Beauty" follows the titular heroine on a journey that begins at the end of the 19th century and ends in the modern world. It plays from June 12 to 16.

Lepage, who created a furor with past productions at the Chekhov Festival, brings a piece that was almost unanimously panned when it played in London in February. It appears to have a somewhat anti-U.S. bent that irritated some in the U.K., although that may stand it in good stead in Moscow. Running from June 25 to 30, "Playing Cards" is set in or around Las Vegas and peopled by illegal immigrants and American soldiers preparing to go to war.

The festival winds down in July with "Shadows" by the Teatro Nacional Sao Joao of Portugal (July 4 to 6) and "Utopia" by the Maria Pages Company of Madrid.


The Chekhov International Theater Festival plays at various venues around Moscow. Ticket and other information is available at www.chekhovfest.ru and 495-223-9650, 223-9651.