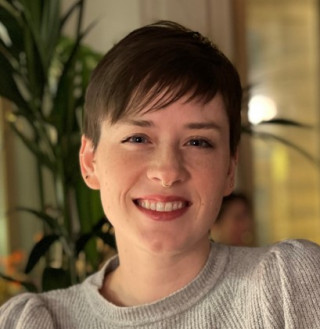 In December, Moscow’s JART Gallery opened a large exhibition of the whimsical work of Evgeniya Dudnikova, a 25-year-old artist from the town of Ramenskoye, not far from Moscow. The exhibition "Nomads," curated by Alexei Korsi, is Dudnikova’s first.

The show includes works in several media: prints, paintings, ceramics, sculpture, and wall-hangings made of organic plastics and oil paint. They are loosely united by themes of wandering, Jungian imagery, and surreal spaces.

The works on the first floor are, as Dudnikova told The Moscow Times, “a series about a parallel world where we can fall from our reality through several portals. It’s an analog of the world we all have in our head." She uses archetypes and images from dreams in her work, “forms that repeat themselves all the time… if you observe them for a long time, you can find some pattern, that is, the meaning they have in our lives,” she said. Horses, birds, ethereal women, angels, flames, flowers, and emblems of nature populate the art on the first floor.

The paintings on the second floor depict scenes closer to reality: friends gather outside wrapped in blankets in early autumn, a golfer clubs high, a woman walks away from a tennis court where a player stands firmly, with feet apart, behind the net.

“But in every work, an element of some glitch of reality is present. For example, the double shadow of a person, or golf balls that have formed a constellation, or other elements that suggest that there is a passage to a second world,” Dudnikova said.

The high ceilings and open space of the exhibition halls give a sense of expansion key to some of the artist’s works, which adopt themes from diverse cultures – Russian, American, African, Japanese, and others. In “Home,” characters gather in a southwestern American desert, prepared to sip tea from China cups and traditional Russian glass and metal tea-holders.

“I really love the idea of culture fusing everything together. Why are there values from a different culture in each work? Because in this world, it doesn’t matter,” Dudnikova said.

Visitors at the opening mingled on both floors of the open space, some wielding smartphones, others throwing sharp gazes across the works, and many casually dressed. Most were young and rather hip. Attendees gathered around Dudnikova as she explained her inspirations.

Responding to Dudnikova’s works, visitor Nikita Podelin told the Moscow Times that the first floor of the exhibition “strikes you in the eye, strongly.”

Anna Lapshinova, a visitor who first found Dudnikova on Instagram, told The Moscow Times that she saw in them a “world of magic, maybe of some child’s imagination, children’s dreams.”

Another visitor, Vasiliy Lukyanov, told The Moscow Times that he found something “familiar” in her works. He nodded at the painting “Chapel of Eternity,” which depicts a translucent angel sitting on a chair in a pavilion with many doors opening to views of dusk and dawn. The ceiling is decorated with exotic birds. He said he had seen this image in a dream two decades ago: “a place with many doors that were open, a pavilion, but lopped off, burned and black.”

“It [shows] a choice, probably,” he said. “In my own dream it was a choice… about a betrayal: should I betray [God] or not. But here, she has her own story, also about God – there is an angel.”

Dudnikova hopes to lead her audience to a place where they might contrast inner musings with outer circumstances. “For me, the external event that is happening – in politics, in some relationships between groups of people, they are less important. They are like a consequence. The source lies in namely our inner understanding of the world… I want this work to remind us about the deep things that could make us a little softer, a little kinder.”

ЭNomadsЭ runs at the JART Gallery through January 2022. Click here to learn more about the exhibition.

Haley Bader writes about art and culture and is an Alfa Fellow.

Haley Bader writes about art and culture and is an Alfa Fellow.
Read more about: Contemporary art

The solo exhibition of works by Vadim Kosmatschof at the New Tretyakov Gallery will change your understanding of sculpture if you let it.
Contemporary art

Once an abandoned Soviet building transformed, Garage celebrates its tenth anniversary this year as the hub of Russia's contemporary art scene.
Contemporary art

Over the past decade, Muscovites’ perceptions of graffiti have changed
Contemporary art

Edward Bekkerman is a Russian-American artist, whose new exhibition, “Heaven,” just opened at the Russian Museum in St. Petersburg.