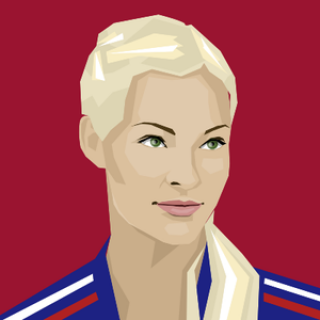 This article is the first in a two-part series on the Russian doping scandal, ahead of a World Anti-Doping Agency ruling this week which could impact whether Russian athletes are allowed to compete at the Winter Olympics next year. Read an opinion piece by the journalist who broke news of the scandal here.

When I jumped seven meters at the World Championships in London this year, I knew I had done well. The result was almost more important to me than the silver medal.

I wanted to take my flag and run around the stadium with the other medal winners. But I wasn’t allowed to. While they ran, I waited.

If you’ve never stood on a podium and listened to your national anthem, you can’t imagine how it feels. It’s a unique moment and you want to enjoy every second of it.

After winning silver, I was elated but couldn’t enjoy it. There was no anthem or flag. I wasn’t allowed to celebrate.

Russia is a huge country and we used to come to competitions with one of the biggest teams, including masseurs, physiotherapists and doctors. That’s the way it’s supposed to be. As an athlete you need help to be in great shape.

In London, we were with 19 Russian track-and-field athletes, and that was it. Some even came without their coaches. People forget that the competition ban affects support staff too.

For some athletes, it was their first big official competition and they didn’t understand what was going on. They were lonely.

For me it was easier: I could draw on my personal experience of the past four years.

In 2016, I was the only Russian track-and-field athlete to be allowed to compete in the Summer Olympic Games in Rio de Janeiro after successfully contesting a last-minute ban by the International Association of Athletics Federations. But it didn’t feel like a privilege.

There was pressure from every side. Journalists were trying to tear me apart. People in the Olympic village were looking at me. There was nowhere to hide.

Before the Games I was in great shape. But a week and a half before my long jump, my body was empty. To compete you need emotion. You can be nervous, angry, high on adrenaline — anything. But not nothing. I felt nothing. That was the biggest problem.

When the first ARD documentary on Russian doping came out, I watched it. I also followed the coverage of WADA’s first report by Richard McLaren. After that, I stopped being curious.

I sleep tight at night knowing I don’t use any kind of banned substances and I feel calm before any doping test. By now, Russian athletes are tested more frequently than anyone else. But people only read the headlines and then conclude that all Russian athletes use drugs.

When I went to Rio, I received a lot of negative comments from all sides including people in Russia, who thought I should have boycotted the event.

That is so unfair: Why should I stay home? Russia has a lot of clean athletes who never had any problems with doping control. Why are we supposed to sit at home on the couch if we didn’t do anything wrong?

A sports career is not long. You need to use every opportunity available to you.

Russia has already lost a lot of professional athletes whose careers are over because they can’t just wait for the issue to be resolved. If you don’t compete, you don’t get paid. It’s like being fired. How are these athletes supposed to live?

My coping strategy is to ignore the entire situation as much as possible. I don’t want to know the details of sanctions on Russian athletes: The specific rules, who made them, how long it is still going to last before we as Russian athletes are reinstated. If you start thinking, you get angry. You look for a solution, but it’s impossible.

When I am at a competition, I know that everyone watching TV or sitting on the stands knows where I am from, even though I am competing under a neutral flag.

Ahead of WADA’s review of Russia's anti-doping status this week, I want to say: I know Russia has a problem with doping. But this problem exists around the world. Big changes take time. We need time.

I still encourage parents to let their children take up athletics. Russia is a big country and there’s lots of talent. You don’t need money, all you need is a track and some shoes.

Track-and-field in Russia still has a future. We just need time.

Darya Klishina is a long jumper who lives in the U.S. She was the only Russian track-and-field athlete to be allowed to compete in the Rio Olympics following a blanket competition ban after WADA found Russia guilty of running a "state-sponsored" doping program. Like several other Russian athletes, she is allowed to compete in international tournaments under a neutral flag.

Kremlin Promises Not to Boycott Olympics Ahead of IOC Ruling

Norway, Canada and the United States topped Russia in the medal table this month after 9 medals were stripped from the host country because of doping.
Sochi

A new order by Putin calls for increased searches, stricter residency rules and restrictions on protest before, during, and after two major sporting events...