"Spring is a time of plans and projects," wrote Leo Tolstoy in "Anna Karenina." Fortunately for the less industrious among us, it's also a time of long evenings, warm sunshine and floral beauty shows of breathtaking proportions. With the arrival of June, now is the last chance to experience the spring explosion of nature before the final petal drops. With this in mind, we've asked the experts at Moscow Parks for some advice on the best places to admire the remaining spring blooms. 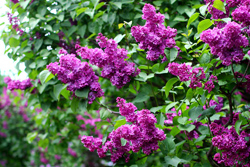 You will have to travel a little way to see it, but the Sirenevy Sad (lilac garden) in the east of Moscow on Shchyolkovskoye Shosse is home to the city's biggest "sirengaria" — a garden of decorative lilac bushes. There are over 30 different species on display, including "The Beauty of Moscow," "Captain Gastello," and "Zoya Kosmodemyanskaya" — named after the heroine of the Soviet Union. Their sweet, intoxicating fragrance is a reminder of the once booming Soviet gardening culture. The garden went under reconstruction in 2014 and has focused on restoring and preserving the lilacs created by Russian hybridizer Leonid Kolesnikov.

Floral therapy in the center

Arguably two of the city's best loved green spaces, Gorky Park and Muzeon Arts Park, can be counted on to put on a good show whatever the time of year, and spring is no different. Blossoming lilacs in vibrant hues line the central promenade to Gorky Park, while further in, formal flowerbeds with roses and tulips vie for visitors' attention. Both Gorky and Muzeon — across the road — feature several magnificent chestnut trees. And if you thought things couldn't get any more photogenic, down at Krymskaya Naberezhnaya you can gape at the blossoming ornamental apple trees lining the river. 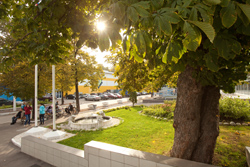 Get lost in nature

Six times bigger than Gorky Park, Sokolniki is a wonderful place to get away from it all without ever leaving the city. The current layout of clearings and alleyways began under Tsar Peter the Great, and they still provide a wonderful space to amble, meander and soak in the natural world. While there are impressive ornamental flowerbeds, the best part of Sokolniki is being able to enjoy the forested wilderness of pines, birches and oaks. Once you've finished getting lost in the woods you can admire the vibrant blossoms in the park's own lilac garden. Situated on the right side of the Calligraphy Museum, it runs adjacent to two stunning rose gardens. 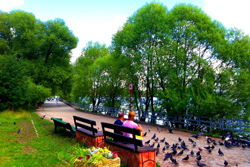 Fun for the whole family

Northern Tushino Park is a little out of the way, toward the northwestern suburbs of the city. If you make the trip, you certainly won't be disappointed. Situated next to the Museum of the History of the Russian Navy, the island of untouched nature features large green spaces and rolling natural landscapes. Large numbers of apple and rowan trees populate the park, and the white flowers and red berries of the latter make the place as pretty as a picture. There are plenty of children's play areas for little ones to run off some steam if blossom spotting isn't exactly their idea of fun. 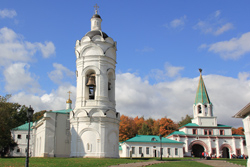 Of the six apple orchards that existed in Kolomenskoye in the 17th century, only three remain — the Kazan, Dyakovsky and Voznesensky orchards. Three hundred years ago apples from these very grounds graced the tsar's dining table, and they still produce thousands of apples every fall to the delight of opportunist fruit-pickers. In early June the trees are in full bloom, and delicate, pale pink and white flowers grace every bough. With all that beauty on show, it's not uncommon to see artists painting in the light-dappled walkways — channeling the Russian impressionism of the 20th century. Meander through the carefully planted paths and soak in nature's living history. 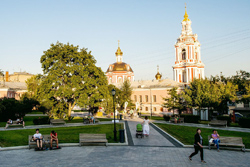 The small, intimate Bauman Garden between the Krasniye Vorota and Baumanskaya metro stations is a favorite with local office workers and neighborhood residents. An oasis of calm in the bustling streets of central Moscow, the garden was originally formed by the convergence of several manor gardens between the 17th and 19th centuries. The Belvedere grotto and alleyway remain from this period, while another highlight is the 1920s concert stage formed in the shape of a shell. It still hosts concerts, lectures and poetry readings in the summer months. Lilac, chestnut and apple trees line the main pathways, dropping soft petals on passing visitors.

Fast-paced drama chronicles Alexei Navalny's investigation into the men behind the 2020 Novichok poisoning attack that almost killed him.
literary award

Pushkin House Gets Ready for Its 10th Anniversary Book Prize

The Pushkin House Book Prize showcases the best non-fiction about and from Russian.
fashion forward

Flash back to childhood or discover adult delights with these classic mid-century sweet pastry treats.