"To be Left Until Called for" is the first large-scale exhibition project of the Avant-Garde Center at the Jewish Museum. Andrei Sarabyanov, the center's director, curated the exhibition, which consists of more than one hundred rarely seen avant-garde paintings from regional museums in 19 cities across Russia.

The exhibition was inspired by the Encyclopedia of Russian Avant-Garde, the third and the final volume of which was published last year. A prodigious work, it features more than three thousand illustrations with some two hundred people contributing to its publication.

"When we were done, we realized that no one had seen some of the paintings in the Encyclopedia except for a few experts. It became clear that we needed to organize an exhibition with the new things we found, and the Jewish Museum agreed to host it," said Sarabyanov in an interview with The Moscow Times. "It would have been an enormous exhibition, like the Encyclopedia itself, so we decided to have two of them," he added. The first of these exhibitions has now opened, and covers the period from the beginning of avant-garde up until 1918.

All of the paintings in the collection come from Russian regional museums in locations such as Cheboksary, Yelets and Kozmodemyansk. It transpired that many smaller museums had avant-garde paintings — sometimes just a couple, sometimes a dozen. The Jewish Museum counts works by artists such as Kazimir Malevich, Vasily Kandinsky, Mikhail Larionov, Natalya Goncharova, Lubov Popova, Olga Rozanova and Marc Chagall in its current exhibition. 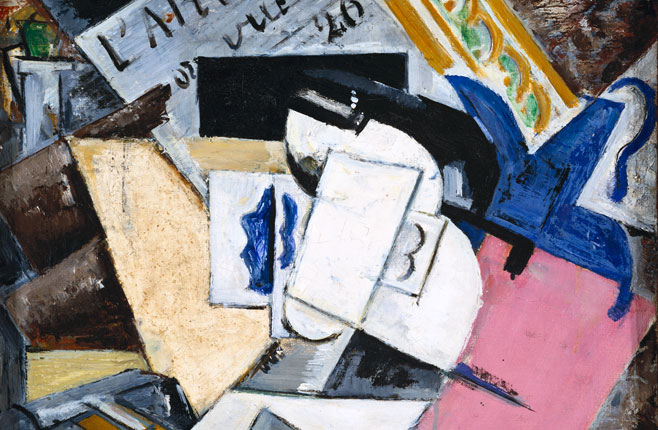 But how did the paintings end up in these far flung places to begin with? Many of the works were sent to provincial museums in the early 1920s to be used as instruction for the new generation of artists. Some of them were sent later on in an attempt to rid larger cities of what started to be perceived as anti-proletarian art.

Sarabyanov explained that a key concept of the exhibition was to show the paintings using the same format that Wassily Kandinsky envisioned when he was planning a Museum of Artistic Culture in the early 1920s. As Kandinsky wrote, "The museum should not be organized by the museum staff, but by the artists themselves." The main principle of organizing an exhibition should therefore be demonstrating the evolution of the artistic form. This is why the exhibition starts from the roots of avant-garde — from symbolism and the Bubnovy Valet (Jack of Diamonds) artistic movement to the later manifestations of avant-gardism. "We hung the paintings chaotically, there is no symmetry here, and if you look at the photos of the exhibitions in 1910s, it is very similar," said Sarabyanov.

There were a few exciting discoveries when organizing the exhibition. For instance, a small, unusual work by Kazimir Malevich, "Small Town," (1908) was found at the Saratov Museum. "Fire in the city" (1914) from Yelets was considered to be painted by an unknown artist, but the experts proved it to be a work of the innovative avant-garde painter Olga Rozanova. The most interesting find was a composition by suprematist artist Ivan Klun, which had the word "Klun" in barely legible writing on the back. The Yelets Museum staff read the word as "Klop" (bedbug) and decided it referred Mayakovsky's poem of the same name.

Now this discovery can continue as the rare collection opens to the public. The current exhibition at the Jewish Museum offers Muscovites a unique opportunity to see extraordinary paintings from some of Russia's best artists, as well as learn more about the history of avant-garde art in Russia.