Let's face it: times are tough in Russia. And as an expat or tourist who's gobbled up his fair share of pelmeni and borshch, you may find yourself hankering after something you swore you never would want: fast-food. But beware imposters; in Moscow, it's not all golden arches and Burger Kings. Below are five ridiculous Russian fast-food fails in the capital.

Kurochka S Nami (Chicken With Us)

What? Starting the list is the quintessence of Russian fast-food failure. If you were from a small town in an ex-Soviet republic and had to make a list of what a fast-food joint should be, Kurochka S Nami would be it. With its knock-off KFC slogan (KCH in Russian) and atrocious service matched only by its food, KCH is perhaps the worst restaurant in Moscow — and maybe the civilized world.

As its name suggests, KCH is a one-trick chick; the bird is the word: wings, strips, nuggets, bites; fried chicken in a salad, in a wrap, on a bun or on a plate. If chickens really had fingers and had clawed their way out of the grave, they would look like the ones you get at KCH. Think long, rubbery, flesh-colored strips still rather frozen. Apparently what the founders of this restaurant forgot is that the 'F' in KFC stands for fried.

Oh, and they've got burgers, too.

Where? Founded in 2013, this wannabe boasts of six restaurants in the food courts of second-rate shopping malls on the outskirts of Moscow, only two of which are accessible by metro.

Why? Because KFC was a good idea, right? 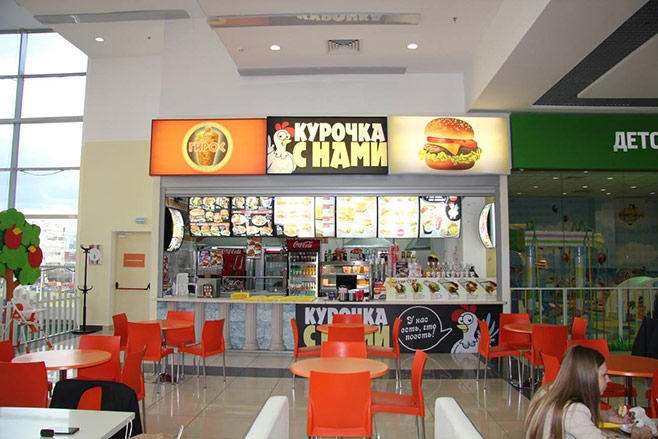 What? Your average Joe Russki would deny it, but Russians love burgers. And they love them at American-style places. Well, like Franklin. Burger. In a huge mall. It doesn't get more American than that.

But the problem at Franklin is: They're not burgers. They're Frankburgers. And most Frankburgers aren't made with beef; they're made of pork, chicken or a beef/lamb meat combo. Now, put an undersized 'cutlet' on an oversized stale bun, squirt a heapin' helpin' of garlic mayo on top and slap it in a brown doggy bag, and you have disappointment-to-go for 500 rubles. Not a bad price for it, actually.

Where? This burger chain exists only in three huge Moscow malls and in Terminal E at Sheremetyevo Airport.

Why? "Franklin was one of the first American presidents, right?" Sasha, a hairstylist, wonders aloud while waiting in line with his receipt.

What? This iconic staple of Russian fast-food appeared on the streets in 1993 under the name Steff, after Steff Houlberg, a Danish slaughterhouse cooperative, and would undergo several name changes before becoming Stardogs in 2004. You've likely seen many of them in Moscow, especially if you hang around dingy train stations and bus stops.

Stardogs' motto is "real hot dogs." You choose the meat of your dog from an array of sausages wallowing for hours on a greasy fryer; notable mentions include one wrapped in bacon strips, one injected with cheese and the Bavarian one, which is coiled up like a glistening, fatty grey snake.

When you've chosen the sausage, you choose the format. The French-style dog sports the sausage in an enclosed, soggy roll; think of a hollowed-out demi baguette loaded with sauces and a meat-stick poking out. The Danish-style follows the classic model of a hotdog with the works. If you're not looking to get splattered with the five different sauces as you walk down the Arbat, then you'd better speak up; the Stardogs ladies have mad trigger fingers.

Where? In Moscow alone there are a whopping 171 Stardogs. That's about twice as many as McDonald's. If you spend any time wandering around the city, you're bound to stumble across one.

Why? They've named dogs after some of the European countries that have tried to invade Russia. Not a bad marketing strategy. 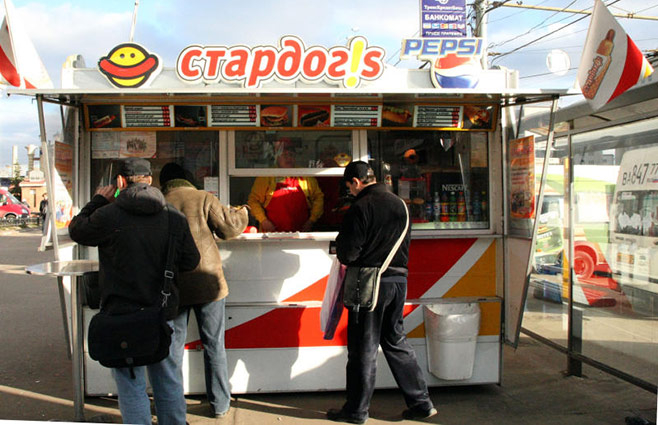 What? Russia is a country where East meets West; however, this restaurant goes a little too far in either direction and the result is epic culinary failure.

Combining a cheesy Italian trattoria with a sushi house is probably never a good idea, especially if the merge was due to both being unsuccessful on their own. Long ago when the concept of good restaurants was less understood in Moscow, Il Patio and Planet Sushi were separate entities. Now they're just barely hanging on, reserved as that place you go to when there are no alternatives, you're stuck in the rain and need to use the bathroom.

With so many other great Italian places in Moscow, there's just no reason to visit Il Patio. Most pizzas are topped with kitchen leftovers from salads and pasta dishes, like iceberg lettuce, arugula and artichoke hearts. And the pasta comes like an upside down pizza scraped onto a plate. The bottle of spicy oil on the table is the best part of the restaurant, and stealing it may be the only way to get you your money's worth.

Now if you like your sushi made with microwaved warm rice, stale seaweed and served on the same white plate as the pizza and pasta, then Planet Sushi is for you. It's even better if you like the authentic Japanese touch of eating it with a fork and a knife. Seriously, stay away from this place; your digestive tract will thank you.

Where? About 70 of them are still clinging to life, but thankfully most have been beaten back to the limits of the Garden Ring.

Why? Because in Russia, sometimes two wrongs make a right?

What? It may not be a homegrown chain, but Russian Subways are cruel; they've got the only turkey cold cuts and hoagie rolls in the whole country, and boy do they blow it. Maybe you can blame it on an absence of sandwich culture in Russia, but you'd think a Sandwich 101 class would be offered to a place that sells … well … sandwiches.

A visit to any Russian Subway proves their staff has learned one thing, though: to divvy out as few of the fixings as possible. A small-sized sandwich receives exactly two slices of meat, two tomatoes, two pickles and two olives, if they're in stock. The sandwich artist then dumps a pile of shredded cabbage on top and throws it mercilessly into the oven. It doesn't matter if you wanted it cold; that thing is going in whether you like it or not.

When it's done, you have any number of sauces to squirt on, which are all free for some reason. That's good, because Russians also love squirtable sauces: barbecue, ranch, honey mustard, ketchup or the mayo standard — they all go onto Russian Subway sandwiches, and it seems no one except the foreigners know the injustice that's been done. Any sandwich with your sauce, sir?

Where? Subways have become one of the most popular fast-food chains in Russia, with hundreds of restaurants from Smolensk near the Belarussian border in the east to Yakutsk, a town just outside the Arctic Circle.

Why? Because bread, meat and cabbage. Mmm.

The Reindeer Herders' Festival celebrates the unique lifestyle and culture of Russia's nomadic reindeer herding communities.
roll up your sleeves

Instead of offering a historic retelling, Danila Koslovsky’s “Chernobyl” tells the story of a fictional firefighter amid the nuclear disaster.