This article was originally published on July 19, 2015.

The avant-garde Pritzker Prize-winning architect Zaha Hadid is enjoying a retrospective display in St. Petersburg — one of the most architecturally conservative cities in Europe, where commitment to historic preservation is high but plans for contemporary architecture usually hit a dead end. As one sad professional joke has it, the four contenders for the Pritzker Prize in St. Petersburg — Carlo Rossi, Domenico Trezzini, Giacomo Quarenghi and Francesco Bartolomeo Rastrelli — have all been dead for about 200 years.

For Hadid herself, however, the St. Petersburg link is deep and meaningful. Early on the Iraqi-born architect, who studied under Rem Koolhaas, developed a passion for the Russian avant-garde, in which her designs are deeply rooted. It was no accident that in 2004 Hadid received her Pritzker Prize in St. Petersburg, where, in her acceptance speech, she spoke fondly about the art of Kazimir Malevich and her dedication to the traditions of the Russian avant-garde.

Made specifically for the Nicholas Hall of the Winter Palace at the State Hermitage Museum, the Zaha Hadid exhibition features around 300 items, from drawings and models to photography and videos as well as design objects, including shoes and furniture. To highlight Hadid's connection with the culture, the curators displayed Kazimir Malevich's "Black Square" and a selection of Suprematist works with Hadid's objects.

The exhibition, prepared by the State Hermitage Museum jointly with Zaha Hadid's studio in London, runs until Sept. 27. The retrospective follows the architect's career and her remarkable shift from talented newcomer, whose work remained on paper for a number of years, to one of the world's most sought-after designers. Hadid's first completed project was the Vitra Fire Station in Weil an Rhein in 1993. Her most recent works include the Guangzhou Opera House in China, the Heydar Aliyev Center in Baku, the National Museum of the 21st Century Arts (MAXXI) in Rome and the London Aquatics Centre.

More importantly, the display gives a sense of Hadid's philosophy and her set of values, her fascination with nature, and her ability to break new ground while remaining faithful to her first love, the avant-garde. 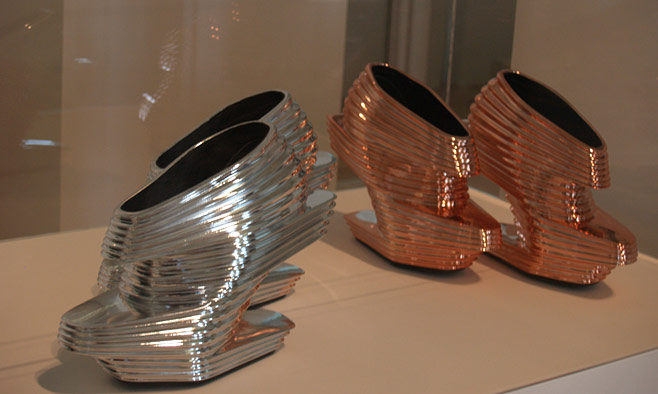 "The Zaha Hadid show was a personal choice of the director, Mikhail Piotrovsky, and he did everything he could to achieve it, said Geraldine Norman, adviser to the director of the State Hermitage Museum. "The result is spectacular — from the great Suprematist paintings that she uses to develop her ideas, to the white moldings, to models, to photographs of the finished buildings — it gives a fascinating picture of process. It was not easy to install in an imperial ballroom! The Hermitage curator and the designer of exhibitions came to London to understand the challenge in advance. Then Zaha's assistants did terrific work on the spot."

"The ceremonial Nicholas Hall that plays host to the exhibition is one of the museum's grandest and most imposing venues. Curators claim that it overwhelms any artist displayed there — but definitely not Zaha Hadid, an artist of global importance and extraordinary talent," said Yury Molodkovets, an artist and photographer with the State Hermitage Museum.

"The exhibition fits beautifully into this space; I love the way this display dissects the gorgeous Nicholas Hall, and it is amazing how smart the hall's natural light has been used," Molodkovets said. "Also, this exhibition is unbelievably consistent. I cannot recall any other project that showcased such concentration of art and ideas. She is a design titan, whose personality and talent are an equal match to the artists whose work makes the Hermitage's permanent display."

At the same time the exhibition highlighted the almost total lack of any contemporary architecture in St. Petersburg, where unbending municipal officials and a conservative public effectively block any bold or unorthodox architectural project on the grounds that it will be out of place and inappropriate in the consistently classical cityscape.

"The Zaha Hadid display at the Hermitage is breathtaking, but after you catch your breath, one thought immediately comes to mind — that modern architecture remains a missing link in our city," said art critic Tatyana Troyanskaya, the host of daily Art Lunch show at the Ekho Peterburga Radio Station. "Unlike Rome, Moscow and Baku, which have recently received Hadid's iconic futuristic buildings, St. Petersburg remains caught up in reflection, and we still cannot afford to let any new architectural thought in. I very much hope that the Hermitage's display helps to prepare public thinking for a more open and a more courageous attitude."

From the Archive: Zaha Hadid Debuts in Moscow

Visionary architect Zaha Hadid has made her Russian debut with the construction of a stunning avant-garde office complex in Moscow.
disappearing act