The New Tretyakov Gallery on Krymsky Val has filled its central exhibition space with 160 works by Gely Korzhev — a painter who has been named one of the last socialist realists of 20th-century Russia.

The curators have called the exhibition controversial, saying that it was one of the most difficult projects mounted by the gallery. The ambitious show is a retrospective of paintings and sketches made by Gely Korzhev (1925-2012), a post-war painter and a "man of the sixties generation" who began his artistic career in the Soviet Union after the Khrushchev Thaw.

"I don't remember another project that we were as passionate about," Zelfira Tregulova, director of the Tretyakov Gallery, told The Moscow Times.

The venue for the show is the Krymsky Val's main exhibition hall, which had just hosted the extremely popular Valentin Serov exhibition. But for this show, the spacious hall has been transformed into a maze-like structure by architects Evgeny and Kirill Asse and Nadezhda Korbut. As visitors enter the hall, which is divided by wooden structures into narrow corridors, they begin exploring Korzhev's personal experience of the world beginning in 1941 and ending in 2011.

The museum curators admit that the "architecture of the exhibition is in some cases intentionally uncomfortable for the visitor." But the compressed space helps the viewer understand Korzhev's "rough artistic statements." 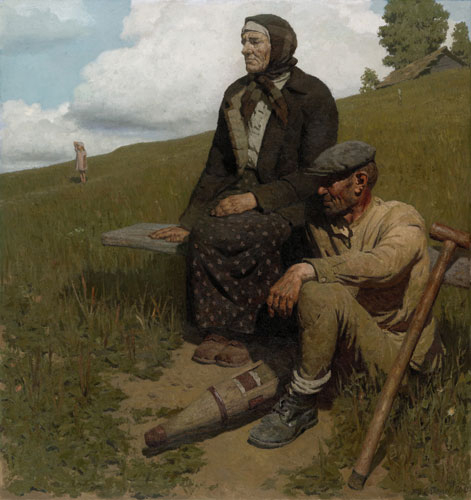 Korzhev entitled this piece "Clouds" and did not explain the figures.

The project's organizers call the exhibition "experimental" because it is not the kind of traditional retrospective that shows the artist's best-known and best-loved works. Instead it is a more personal project of the curators that reveals their point of view about Korzhev's paintings.

Although he lived and worked in Soviet Russia, Korzhev was a non-conformist artist who never made conventional portraits of Soviet leaders.

"He represented holistic Russia, with its victories and, to a greater extent, with its sorrow, defeats, and grief. He's a unique phenomenon — a painter of Russian grief," said Alexander Borovsky, art historian and head of the department of contemporary art of the State Russian Museum in St. Petersburg.

His work is certainly not triumphant. Korzhev was among the first to avoid ceremonial portraits and address the traumas of WWII, for example in the painting "Traces of War," which portrays a seriously wounded soldier who radiates inner beauty. In the painting "The Conversation," Korzhev's Lenin is depicted with his eyes hidden by a cap, while the blind beggar next to him has inner sight. The red banner in the painting "Raising the Banner" could have been any color, according to the painter, who said it represented a spiritual feat, not an achievement of communism. And the painting "Yegorka, the Flyer" seems to have been inspired by Andrey Tarkovsky's film "Andrei Rublyov," which starts with a 4-minute episode about a man in the 15th century attempting to fly. 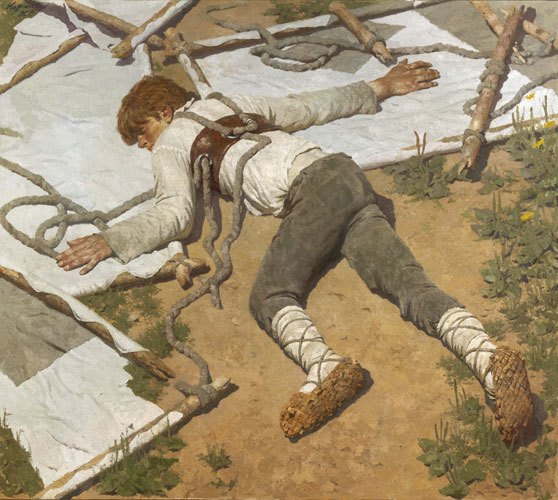 "Yegorka the Flyer" appears to have been inspired by the Andrei Tarkovsky film, "Andrei Rublyov."

Korzhev was more concerned with social problems than political change. With a surrealistic series called the "Tyurlikis" (1980-2000) — anthropomorphic creatures celebrating on the ruins of human world — Korzhev attempted to show the degradation of society. He said that these creatures resemble humans and "by looking at them we can see ourselves reflected in them more easily."

Following the death of his parents in 1986, Korzhev, in an apparent attempt to find answers to personal questions, started a series of paintings based on the Bible. He said these paintings reflected the views of a person brought up in atheist Soviet Russia.

Out of the 160 works on display in the exhibition, only 25 are from Russian collections. According to Tregulova, most of Korzhev's works were taken out of the Soviet Union after 1986. Almost 40 paintings came from the U.S. collection of Raymond Johnson, a U.S. collector of Russian art. The Tretyakov exhibition displays works from its own collection, the State Russian Museum, the Radishev State Art Museum in Saratov, the Regional Art Museum of Samara, the Regional Fine Arts Museum of Kemerovo, the Krasnodar Fine Arts Museum, as well as from private collections that include Johnson's, the collections of the Institute of Russian Realistic Art, the artist's family and the Gely Korzhev Foundation.