A team of police officers stands by a yellow, colonnaded building in central Moscow. Close on their heels is a camera crew from the Kremlin-controlled NTV station. As the officers move into the building, the NTV reporter turns to the camera. "There are many corridors here, lots of rooms," he says in conspiratorial tone. "The doors are almost all locked, so the officers will have to break them down."

On cue, one of the balaclava-wearing officers revs up a chain saw. With the roaring sound in the background, the shot switches to another man breaking down several doors with a large sledgehammer. The viewer never sees behind the doors.

The Moscow Church of Scientology has become used to such visits from law enforcement. This particular one took place in 2011. In January last year, the venue was searched again in connection to an investigation into the illegal sale of land. And more recently, in August, police raided the venue in search of hidden cameras and microphones allegedly used by Scientology to spy on its members.

"It is part of a media show to blacken our name," says the founder of Scientology's Moscow branch Vladimir Kuropyatnik. He sees the raids as part of the authorities' attempt to take down his church.

It was the early days of post-Soviet capitalism when Kuropyatnik, who had been trained as a radio engineer, interviewed for a job at a joint venture.

One of the recruiters was a Swedish businessman and, as Kuropyatnik learned from corridor gossip, a Scientologist. "That man stood out from his Russian colleagues," he says. "He was impeccably dressed, friendly, competent and open."

The Scientology movement, founded in 1954 by American science fiction writer L. Ron Hubbard, was in rapid growth at that moment, attracting followers around the world. And wherever it went, controversy and rumors of human rights abuses and tax evasion practices followed.

Kuropyatnik ended up not taking the job, but he was sufficiently intrigued by Scientology to join a seminar at Moscow State University on Dianetics, the self-help treatment system devised by Hubbard that forms the basis of Scientological practice. He then continued his Scientology studies in Copenhagen.

In 1994, a year after Scientology was recognized as a religion in the United States following a protracted legal battle with the country's tax service, Kuropyatnik registered Russia's first Church of Scientology in Moscow as a new religion.

"It was a difficult time," he says. "I saw people's gloomy, tired faces on the metro every day. Russia needed Scientology. Instead of providing the hungry with fish, it gave them a fishing rod to help them feed themselves."

After decades of forced atheism under Stalin, Russians were initially suspicious of indulging in the spiritual. But with perestroika also came a renewed openness toward new movements as a generation of reformers embraced the idea of religious plurality.

Scientology quickly expanded. Today there are several thousand members in Moscow and several tens of thousands of active members across the country, according to Kuropyatnik's estimates. The Church of Scientology in Moscow had three employees upon its launch — it now has more than 300 people on staff and is a place bustling with activity.

Sunday service begins at 11 a.m. sharp. It is led by a middle-aged woman with short hair, dressed in a long black robe with a golden V-shaped collar. Around her neck hangs an eight-corner cross, the symbol of Scientology.

"Miracles happen around me on a daily basis," she says. "I have cured people while they were sitting right in front of me in their chairs. I've even heard of a man who walked over glowing embers."

During the hour-long sermon, the woman reads from a "holy" book, and speaks of "salvation" and "sin." The service ends with a prayer for human rights and religious freedom and a standing ovation to a bronze bust in the corner of the room — a bust of Scientology founder Hubbard. No mention is made of Xenu, the galactic dictator who, according to one of Hubbard's more notorious and secretive theories circulating in the media, dropped billions of creatures into volcanoes on Earth and killed them with hydrogen bombs 75 million years ago.

Scientology has often been accused by critics of using a strategy of "religious cloaking" to bypass state control over what is going on inside its walls. And doubt over its religious status exists even among some of its adherents. A former member of the Moscow Church of Scientology, who fled Russia after a dispute with the church's leadership but is still a practising Scientologist, told The Moscow Times he had not attended service a single time during more than ten years at the church. He said: "Even staff members of the church don't fully understand why Scientology is a religion." 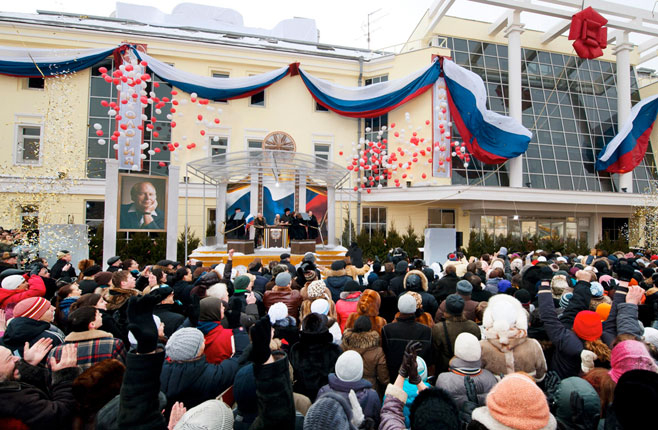 According to Russia's dominant religion, the Russian Orthodox Church, whether Scientology is or isn't a religion is not a subject for debate.

When the Orthodox Church resurfaced after decades of being forced underground by the Soviet regime, it was less than pleased to find itself surrounded by "new religions" such as Scientology. In 1994, the Council of Russian Orthodox Bishops declared Scientology a "pseudo-religion imported from the West."

Alexander Dvorkin, a former Soviet émigré and member of the Orthodox Church, in 1993 set up an NGO to research "totalitarian sects and destructive cults." He says he was prompted to action after witnessing the distress of churchgoers who had relatives in Scientology. "Their families had been torn apart," he says.

Dvorkin became a leader of a virulent "anti-cult movement" and a prominent figure in Russian media, where he has consistently warned of the dangers of so-called new religions. "Scientology is totally evil," he says. "It oppresses people and draws more and more money out of them."

As Russia's relations with the West soured over conflict in Ukraine, the battle against Scientology as a distinctly "foreign" movement that poses a threat to Russian cultural values has intensified. "In the context of trying to oppose the European Union and the United States, defending Russia's cultural and religious identity has become a way of showing patriotism," says Veronika Kravchuk, a religious scholar.

Dvorkin, who attributes some of his success to his image as someone who has experience abroad and can therefore decipher "foreign" cults,  has fed that narrative by publicly warning of supposed ties between Scientology and the American secret services.

Dvorkin says his work has triggered a "typical counter reaction" from the Church of Scientology. His mail has been hacked, he says, acquaintances from his past have been harassed, and he has been sued, unsuccessfully, for slander and received threats.

His center is not officially connected to the Orthodox Church or the Kremlin, but it has the implicit backing of both. Dvorkin is also a member of an advisory panel on religious affairs to Russia's Justice Ministry, and acted as its chairman for five years. "Politicians by now know that any connection to Scientology is a liability," he says.

Several books written by Hubbard, along with Scientology teaching materials have been labelled extremist literature, and banned. And Scientology groups across Russia have not been allowed to register as religious organizations.

Concerned with the ferocity of the clampdown, some religious scholars are worried that the new rules of engagement undermine the atmosphere of religious freedom of the 1990s — to the benefit of Russia's dominant religion. According to its Constitution, Russia is a secular country. But under the rule of President Vladimir Putin, the Kremlin has increasingly leaned on the church to promote its conservative agenda.

"The Russian Orthodox Church is trying to root out its 'competitors' with the help of the authorities," says religious scholar Yekaterina Elbakyan. "By doing so, it is also making itself part of the government apparatus and making itself dependent on the state," she says.

With little trust in the Russian courts, Scientology groups have taken their cause directly to the European Court of Human Rights. In all three cases heard by the court, the ECHR said Russia had tried to use a new law requiring movements to be older than 15 years to be eligible for registration as a religion to discriminate against Scientology groups in Russia.

That has made even critics of Scientology wary of celebrating its demise in Russia. They argue that governments should concentrate on building strong cases against Scientology on grounds of widely reported malpractice within the organization itself and use, rather than bend, the law.

"They still deserve fair treatment and I am not convinced they are getting it in Russia," says Jonny Jacobsen, a Paris-based journalist who has been studying Scientology since the early 1990s.

"In Russia, Scientology has come face-to-face with an arbitrary system steeped in bad faith, changing the rules whenever expedient: savor that irony," he wrote.

The standoff between Russia and the West also means that the ECHR can no longer fulfill its role as a watchdog, after a new law was passed giving Russian courts the right to overrule international courts' decisions.

Kuropyatnik, meanwhile, is certain the church will survive, even if it loses its status as a religion. "The political atmosphere, and rabid fights against religious freedoms come and go. But the church will stay," he says.

How Do Russians Feel About Religion? (Infographic)

Russian President Vladimir Putin has signed into law a bill that protects the canonical texts of Christianity, Islam, Judaism or Buddhism from being designated...
news

A woman named Nikol looks to the camera, wiping away the tears of happiness. She has reason to be happy, having navigated through to the next round...
white, black or green