A young woman named Nikol looks to the camera, wiping away what seem to be tears of happiness. She has reason to be happy, having navigated through to the next round of the Russian television show "Battle of the Psychics." Somehow, she had managed to select the one car out of 30 that contained a teenager inside the trunk.

Nikol, who says she has been a psychic for 15 years, made quite an impression on the teenager. Not only did she find his car in 10 minutes flat, she also told him that she could sense his father died "some time ago." The boy is shocked. "It's true — in 1998," he answers. "You're amazing."

"Battle of the Psychics" has captured the imaginations of millions of the watching Russian public. According to TNS Gallup, it was one of the top five most watched shows in December 2015 — success that can be put down to a more general blossoming of pseudoscience in Russia.

Pseudoscience was largely suppressed during Soviet times. The moment the system fell apart, however, a Pandora's box of iffy theories sprang open. "Slowly, but surely, it was allowed to make its way into the Russian public mainstream," says Alexander Sergeyev, a member of the Russian Academy of Science's commission on pseudoscience.

Pseudoscience has found a comfortable home in Russia's "anything goes" culture, and is routinely aided by propaganda and unscrupulous media outlets. But the scientific community has begun to fight back, and is looking at inventive ways to debunk irrational beliefs, non-scientific myths and interpretations. 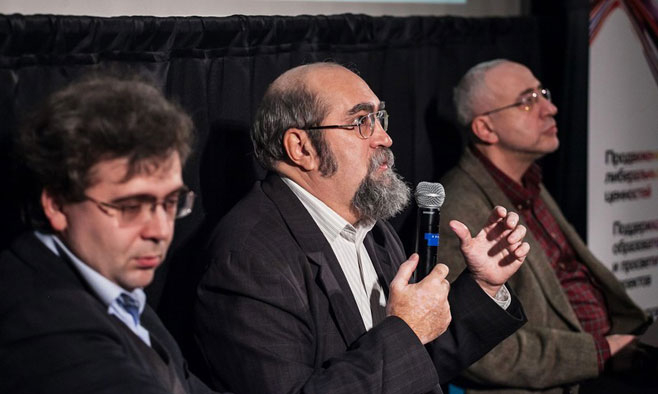 The Free Historic Society lectures and seminars are popular among those  who seek a non-political approach to Russian history.

In 2015, a young team of Moscow-based scientists led by Alexander Panchin and his friend Stanislav Nikolsky launched the Harry Houdini Award project. Their proposition was that the extrasensory industry was bogus, and they called on magicians and psychics to prove them wrong.

The scientists say anyone who thinks they have paranormal abilities can take part in the Houdini Award contest. When applying, Houdini nominees are asked to list their paranormal talents, and after that the organizing committee designs an experiment to test the claims.

"We can only test supernatural abilities that we can model in the course of an experiment. For example, we can't test the ability to cure cancer or predict the future," Nikolsky, co-founder of the project, said.

To win 1 million rubles, a nominee has to successfully complete two experiments — a preliminary one conducted in front of the press, and a final experiment, carried out in front of the experts. In 2015, the Houdini Award team tested five nominees. So far, unsurprisingly enough, no one has passed the preliminary stage. 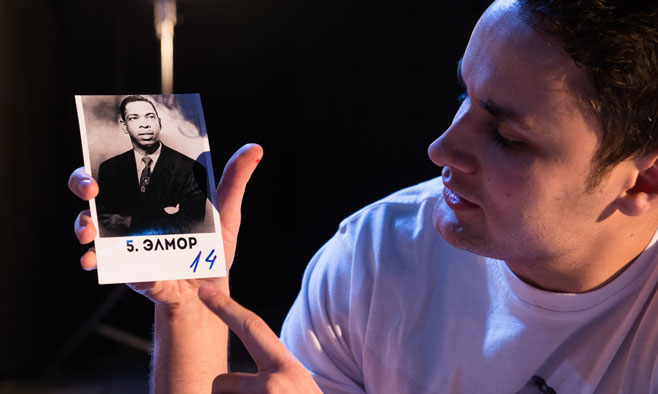 Who Wants a Million?

In the three experiments The Moscow Times observed in late December, none of the nominees came close to success. Unanimously, however, they blamed everything but themselves for the failure.

In the first experiment, the self-proclaimed psychic Iolanta Voronova had claimed she could say who different objects belong to just by looking at them. An experiment was set up where she was asked to return 12 passports to their owners — male volunteers — without opening the documents. The volunteers were present during the experiment and wore the exact same T-shirts. Voronova, a flamboyant woman in her 40s, was allowed to touch both them and their passports.

She wasn't right about a single passport, but Voronova had an excuse. "The participants were too similar and there were no drastic events in their lives," she said.

Another two experiments dealt with death. The first nominee, a gloomy young woman named Zlata Dmitruk, claimed she was a medium and could see dead people; the second one, an abrupt lady in her 50s, Tatyana Ikayeva, said she could see the past and the future with her Tarot cards.

Both of them were offered pictures of 10 different people and a list of situations in which they died. The mediums were supposed to be right about at least five cases in order to successfully pass the experiment. Again, both of them failed, and were wrong about all 10 cases.

"The test was incorrect," a disappointed Dmitruk said after the experiment. "How am I supposed to know whether a man hanged himself or shot himself? I just see suicide," she said. Ikayeva said she agreed with Dmitriuk.

Panchin has little time for such explanations. "The fact that these 'psychics' couldn't win the million shows exactly why faith in paranormal abilities is groundless," he said. 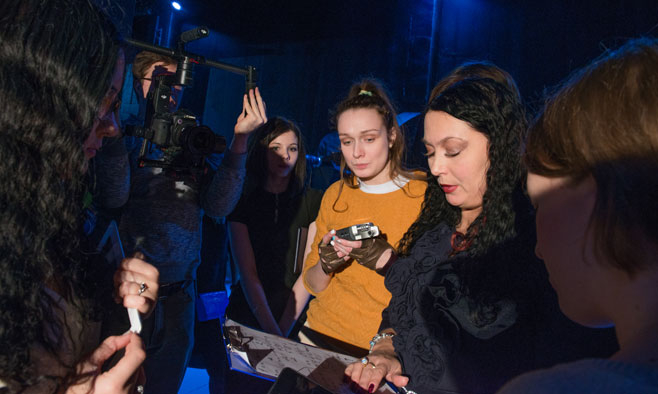 There are two categories of pseudoscience, says Sergeyev from the RAS's commission. The first one is the one packaged and "sold to the public," and includes psychics, "magical" medications and "supernatural" devices. The second involves the system of science itself. "A significant part of research in Russia is falsified or just delusional," he said.

And here's where the "Rooter" project comes in. Launched in 2008 by Mikhail Gelfand, a prominent biologist, Rooter tests standards at scientific journals. It started when Gelfand decided to send a bogus article, composed entirely by a computer program, to a scientific journal and see if they would publish it.

The benign experiment quickly evolved into a full-blown scandal. The scientific journal published the article with "minor corrections," and failed to notice an all-too revealing dedication Gelfand had inserted in it. "The imaginary author of the article thanked myself, Mikhail Gelfand, for pointing out the problem of scientific magazines publishing random articles," Gelfand said.

The scientific journal that published the article was soon excluded from the Education Ministry-affiliated Supreme Review Board's list of recommended magazines.

Gelfand says pseudoscience continues to be a serious problem in Russia. "It is prevalent in three areas: in sensationalist lies like belief in UFOs; in clerical teaching about evolution and so on; and within government, when the state bases engineering developments on bogus research." All three areas are dangerous for the country, Gelfand says — "dangerous in different ways, but dangerous nonetheless." 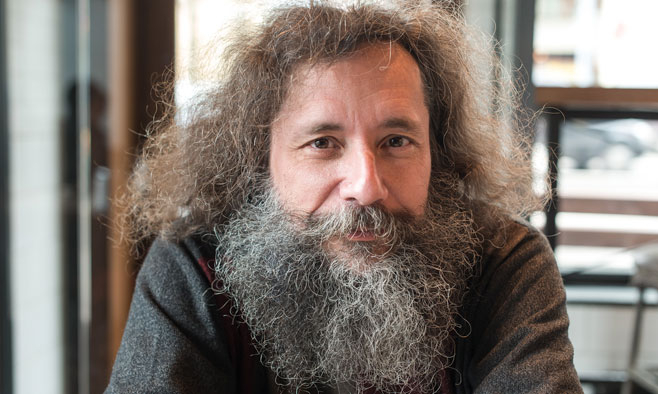 Mikhail Gelfand, a prominent Russian scientist, is concerned with the dangerous spread of pseudo-science throughout Russian society.

On the governmental level, pseudoscience has infiltrated not only engineering developments, but the humanities as well. "Over the past decade the state tried to create its own history," says historian Nikita Sokolov. He is one of the founders of the Free Historic Society, an organization advocating purely scientific approaches to Russian history.

"Politicians are now using history to push their own agenda," Sokolov told The Moscow Times. "They are creating this image of Russia that has its own special path, that has always been a fortress under siege, surrounded by enemies."

A siege mentality is useful to politicians, Sokolov says, since it helps establish political conformity and encourages people to give up their rights. From a historic point of view it is "bogus," however: "Russia has never been a fortress, it has always collaborated with its neighbors, and to that end it is no different from any other country," Sokolov said.

The attempt to rewrite Russia's history by banning old schoolbooks and introducing new, ideological ones ones should have caused an uproar in the historical community, continues Sokolov. There was, however, nothing of the sort. At least part of the reason was that there "is no historical community" as such in Russia.

Sokolov is especially critical or the role played by Vladimir Medinsky, Russia's culture minister and a historian by education.

In 2015 Medinsky declared that Russians should treat "epic Soviet heroes … as canonized saints." And anyone who expressed doubt was essentially in the business of "betraying the memory and deeds of ancestors."

Medinsky's words came in response to renewed questioning of the role of Panfilov's "28 guardsmen" in the World War II defense of Moscow. Archivists have argued, however, that the episode was a fantasy of Soviet journalism, published for propaganda purposes.

Sokolov's Free History Society issued its own statement, condemning Medinsky of being "unprofessional," "full of managerial pride," and "bureaucratic arrogance." "It is a historian's duty to establish the historic truth based on original sources, no matter what the political situation is," the statement read.

The society, which emphasizes its apolitical nature, monitors history teaching and comments made by politicians and government officials. In addition to this, it produces numerous lectures and seminars.

"The demand for our lectures is very promising. Even if there are 30 people present at the lecture, we know that 2,000 people are watching it live on the Internet, and another 100,000 will watch it later on YouTube," Sokolov said. "People long for high quality information these days. The television just doesn't do it anymore."

There is no simple answer to the question of how to tackle pseudoscience most effectively, says Sergeyev from the RAS's commission on pseudoscience. "We can't just ban it," he says. "To do that would be to infringe on freedom of speech and freedom of beliefs."

Attempts to ban certain strands of pseudoscience would, in any case, probably cause them to re-emerge under another brand. "It would become an endless game of whack-a-mole," Sergeyev added.

But scientists admit they face an uphill task in dissuading pseudoscience believers. In particular, the extrasensory believers surveyed by The Moscow Times suggested they were unlikely to be swayed by any argument.

"I knew a girl who could say exactly what someone was doing just by looking at a photo of them." Yekaterina Zemina, a 27-year-old Muscovite, told The Moscow Times. "There are unexplored things in this world, and pretty much nothing can convince me otherwise," she said.

Natalya Malinovskaya, a resident of St. Petersburg, said that it was only a matter of time before the mainstream would accept extrasensory abilities as fact. "People were once skeptical about a lot of things including the fact that the Earth was round and turned around the Sun," she said. "Now this is a scientifically proven fact — and I'm positive extrasensory abilities will be too," she said.

Despite the efforts of activists like Sergeyev, pseudoscience is playing a greater role than ever in the lives of Russians. A recent poll by state-run VTsIOM reported that 55 percent of Russians now believe in the ability to foresee the future — compared to 43 percent in 1990. 48 percent believe in magic in general, a full 11 percentage points more than in 1990.

Thousands of Psychics, Witches to Descend on Kiev in the Name of Peace

Upward of 2,000 psychics, shamans, witches and warlocks are set to descend on Kiev on Thursday in a bid to bring peace to Ukraine through magic...
news

The trial has begun against a self-proclaimed psychic healer who stands accused of moonlighting as a cocaine pusher, the Interfax news agency reported...
news

About half an hour from the western outskirts of Moscow, the grays of Russian suburbia give way to a jagged horizon of shiny glass, concrete and abandoned...
'analyzing' the move

Russia on Saturday denounced a $60 price cap on its oil agreed by the EU, G7 and Australia, even as Ukraine suggested it was not tough enough and...