Limping and with cane in hand, Garegin Tosunyan had reason to look frustrated. On the one hand, the President of the Russian Bank Association was having trouble managing the slippery black ice conditions underfoot. On another, he was being cornered by a group of angry Russians, all of them foreign currency mortgage holders in various degrees of distress.

As he shuffled up the stairs, they booed, hissed, and hurled insults. "It's been 13 months, Garegin Ashotovich, you've had 13 months to do something," shouted one of the more polite members of the crowd.

Tosunyan's irritation grew. "You knew it was a risk," he snapped. "No one forced you to commit to these mortgages."

It was an unwise answer. Almost immediately, Tosunyan's words were drowned out by more booing, yelling and cursing.

Their Side of the Story

Negotiations between banks and defaulting mortgage holders were last week reduced to a series of emotional protests in bank offices and central Moscow streets.

The aim of protesters was to draw government attention to their often wretched financial situations. But President Vladimir Putin's spokesman Dmitry Peskov indicated the authorities were unmoved, saying they had no solution "for those who had made a calculated choice."

According to activist groups, around 100,000 mortgage holders have fallen victims of the weak ruble. Mikhail Kozhokin, board member of the state-run behemoth VTB24 bank says the number is, in fact, much lower: 17,500 as of Dec. 1, 2015.

Foreign currency mortgages are by their nature speculative. Their holders bet on economic stability, a strong ruble and a high oil price. If the bet's good, you pay much less than those who applied for a ruble mortgage. If it's not, you can just as easily go broke. Those who took out mortgage loans in hard currency punted on the stability of Vladimir Putin's economic and political system.

The story they tell is remarkably similar. Years ago, when the skies were bright, they applied for a mortgage. They didn't have quite the credentials for a ruble mortgage, but were offered a hard currency one.

Alexander Zolotko, a 38-year-old system administrator, bought a small two-bedroom apartment with a mortgage from Bank of Moscow. He was told his and his wife's joint income wasn't enough for a ruble mortgage. "But they told us we were perfect for a mortgage in Swiss francs," he told The Moscow Times. 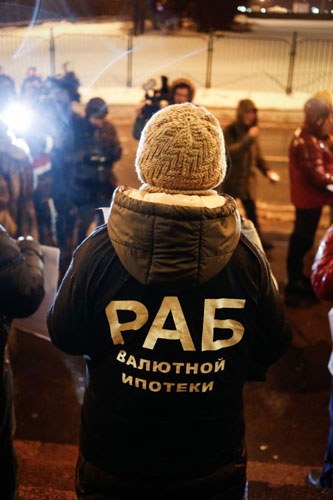 "Slave to a hard currency mortgage." Struggling to pay, mortgage holders say they shouldn't have to shoulder all of the burden.

Irina Osti, a 41-year-old single mother, used a dollar mortgage to buy a one-bedroom apartment in the Moscow region. She was practically forced to take out the hard currency loan, she says, and now owes her bank tens of millions of rubles. Her monthly payment is four times higher than her actual salary.

Like many hard currency mortgage holders, Osti stopped paying some time ago. "If I had a salary that would cover this monthly payment, I doubt I would have ever needed a loan in the first place," she told The Moscow Times.

For Alexei Novikov, a 45-year-old entrepreneur from the Siberian city of Novosibirsk, it's not even about the monthly payment anymore.

Standing at the back of a protest at Alfa Bank's Moscow headquarters, Novikov showed The Moscow Times a printed court ruling that authorized the bank not only to repossess his apartment, but also to seize an additional 9-million-ruble "debt." The $150,000 — 2.9 million ruble equivalent — loan he took out in 2007 has thus turned into a 12 million ruble loan he has little hope of repaying.

"Seizing the apartment I bought with the loan wasn't enough for them — they now insist on me owing them three times more," he says with a sad chuckle. "How insane is that?"

Is Compromise Out of Reach?

Both sides agree on one thing: in the end, it's about cold bargaining.

"Emotions are high and rising, but when it comes to the crunch, the calculators come out," VTB24's Kozhokin wrote in a column for the Banki.ru website on Feb. 1.

Zolotko says mortgage holders are prepared to take on a third of the depreciation risk. "When the loans were issued to most of us, the dollar cost 25 rubles. We're ready to add 30 percent to this number, that is pay 40 rubles to the dollar," he said. This is the rate at which Russia's Central Bank advised banks to recalculate their foreign currency mortgages just last month.

The banks show no signs of being ready to agree to these conditions. Some have refused to negotiate. Others have offered different compromises — either a lower rate of 60-65 rubles to the dollar, postponement of mortgage deadlines, or a lowering of interest rates after converting loans into rubles.

In theory, foreign currency mortgage holders can apply for assistance from Russia's State Mortgage Agency. If they meet qualifying conditions, they can receive up to 600,000 rubles of aid ($7,700). But for people whose debts amount to tens of millions of rubles, it doesn't make much of a difference.

Russian opinion makers are split about who is to blame. Some, like the famous blogger Ilya Varlamov, argued mortgage holders should take the full hit. After all, who would help a currency speculator who made a bad bet? Others, like opposition leader Alexei Navalny, were more sympathetic to the mortgage holders, and instead blamed the Kremlin. "We pour unlimited amounts of money into banks that are headed by children of Putin's cronies, but when it comes to foreign mortgage holders, we say 'tough, your fault,'" he told the Ekho Moskvy radio station.

Economists accept the situation is ambiguous. Vasily Solodkov, head of the Bank Institute at Moscow's Higher School of Economics, told The Moscow Times that there is no obvious, fair way to assign losses: "Banks shouldn't be held responsible — they did nothing wrong and the clients made their own choices."

Besides, Solodkov continues, the government still has the cash to bail out what is a relatively modest sum overall — approximately 126 billion rubles ($1.5 billion) according to VTB24's Kozhokin. "We recently absolved Mongolia of its entire 175 billion ruble debt to us, and that would have been enough," says Solodkov.

But perhaps the modest size of the debt is working against the mortgage holders. Were the government facing discontent from a large group of society like pensioners or truckers — one too big to fail — it would, no doubt, look to compromise.

In the meantime, mortgage holders say they will persevere until demands are met, and are preparing to take their protest to other banks and government offices.

One of the largest Russian banks to offer hard-currency mortgage loans has said it cannot help clients struggling to service debts after new falls in the...
news

No Sympathy for Foreign-Currency Mortgage Holders From Putin's Spokesman

The Kremlin is aware of the situation of foreign-currency mortgage holders who have been protesting in different banks during the last two weeks, demanding...
news