The State Symphony Capella of Russia

Compelling ensemble with a world-class pianist

The State Symphony Capella of Russia will perform on Thursday alongside internationally acclaimed pianist Andrei Korobeinikov. The sumptuous ensemble will be directed by Valery Polyansky. Korobeinikov has toured extensively over the past 20 years and is widely considered to be the uncrowned winner of the 2007 Tchaikovsky Competition. The Symphony Capella is comprised of a choir, orchestra and soloists who manage to maintain a creative autonomy while existing as an organic unit. With so much talent in one room and a program with Rachmaninov's "Piano Concerto No. 1" and Mahler's "Symphony No. 3" to be performed, this is one not to miss.

Italian pianist Roberto Cominati, winner of the International Busoni Piano Competition, will perform his debut at the Tchaikovsky concert hall this Friday. A pianist with a refined touch and nuanced sound, this concert will showcase his meticulous approach to live performances. Cominati has particularly established himself as an interpreter of Ravel and Debussy, both of which feature on the program. Stanislav Kochanovsky, considered to be one of Russia's best young conductors, will direct the ensemble. Combined with the expertise of the Moscow Philharmonic, there is no doubt this will be an exceptional evening of classical music. 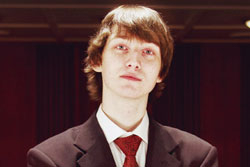 The prestigious great hall of Moscow's conservatory will be taken over several times in the coming months by Opera Apriori, Moscow's own opera festival. Opening night is on Sunday, when a talented international line-up of singers will perform Rossini's "Petite Messe Solennelle" (Small Solemn Mass). Rossini composed his "petite messe" more than 30 years after the premiere of his final opera. He famously described it as the last of his "péchés de vieillesse" (sins of old age). This Mass, however, emphatically demonstrates that Rossini's creative powers were as strong as ever. It's also neither particularly small nor particularly solemn, and should make for a triumphant opening to a dazzling festival.

Muchnik's Picks: Unkle, Obe Dve and More Music on the Weekend in Moscow

While this week's thaw may not have put a spring in everyone's step — particularly those who fell prey to the ice — at least the frosty January...
news

Where to go and what to see if you like classical music and live in Moscow.
Weekend Kitchen