Köken Ergun's solo exhibition entitled "Young Turks" just opened at the Garage Museum of Contemporary Art. At the time when Russia-Turkey relations are at their lowest point in the post-Soviet era, the exhibition is devoted to Turkey's cultural and linguistic expansion around the world. It consists of a two-channel video, multi-media installation and other art pieces.

"Young Turks" curator Yulia Aksyonova explained the exhibition's timing to The Moscow Times: "Relations between our two countries are still tense, but the project was conceived well before the conflict had escalated. Despite the fact that the project touches upon political themes, it is not political in itself; it doesn't promote any political concepts or ideologies. It's all about the personal experiences of people and their emotions."

Köken Ergun, an up-and-coming Turkish artist and film director, introduced his project at the opening. "It's about Turkish schools around the world, in more than 100 countries, but generally it's about a model of expansion which could be practiced by other nations and which has historical similarities to the past."

The schools network depicted in "Young Turks" is operated by the Gülen religious and social movement. The movement was founded by the Turkish preacher and writer Fethullah Gülen and is usually referred to as Hizmet ("service" in Turkish). The schools teach most classes in national languages, but they also have Turkish classes.

Part of the exhibition is a map of the world where the locations of schools are pinned with red lights, Turkish embassies with green lights and Turkish Airlines' direct flight destinations with blue lights. Ergun claims that sometimes the schools predated the embassies. 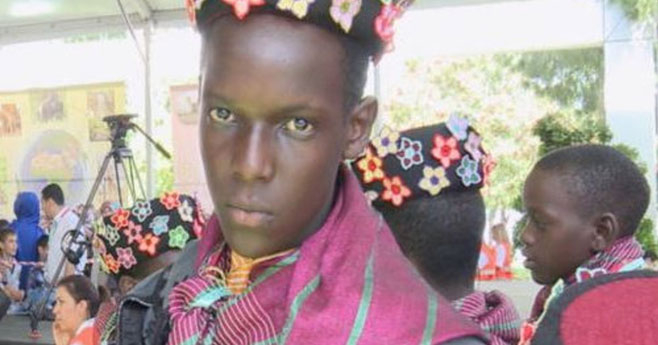 Young people from many cultures want to learn about Turkish culture and history.

There were Hizmet schools in Russia, but the Russian state found them problematic and decided to close all of them several years ago. There used to be one in Crimea, but it was recently taken over by the local government.

"Young Turks" was shot in Kenya, Indonesia and Turkey. The central piece is about the "Turkish Olympics" that took place in Istanbul and Izmir. Every summer students from this network of schools came to Turkey to test their skills in competitions that include knowledge of Turkish folklore, Turkish songs, and Turkish traditional poetry. Besides the competitions there's a three-day fair where all the participating countries have booths or stands. At present, Gülen Hizmet is holding their Olympics in Romania, Ethiopia and Germany due to their disagreements with the Turkish government over current policies.

Köken Ergun explained the meaning of his project. "For me the most interesting was to see the similarities in the behaviors of people towards each other. Do the people have expansionist desires or are they just curious to meet other people? For me the interaction between the Turkish audience, the hosts and the guests is one of the most interesting aspects of this work. The individual stories within this massive phenomenon are most important."

Apart from the central piece, you can also see seven interviews that Ergun filmed with participants of the Turkish Olympics. He says that the title "Young Turks" should be used with a question mark. "What will happen to the kids? Will they emigrate to Turkey or will they go back to their countries?"

Apart from the exhibition, "Young Turks" also offers a large public program with lectures, discussions, and film viewings. The exhibition runs until March 26.

The 2morrow Film Festival, this year conducted in cooperation with the Museum of Moscow, opens on Tuesday, January 26 with Alexander Sokurov's latest...
news

This past week Moscow, news has been dominated by events at the Valentin Serov retrospective at the Tretyakov Gallery.
news

This Saturday in frigid weather, lines to an exhibition of paintings by Russian artist Valentin Serov in Moscow were several kilometers long and people...
essential reading