This past week Moscow, news has been dominated by events at the Valentin Serov retrospective at the Tretyakov Gallery. First the television shows broadcast President Vladimir Putin's visit to the show, then the ever-growing crowds of people who came to see the exhibition in its final week, followed by the entrance door being broken in by overly enthusiastic art lovers, which resulted in the Presidential Human Rights Council intervening and asking to extend the exhibit, and culminating with the announcement that the show has been extended for a week.

That was the wild week in art.

At a press conference on Sunday, the general director of the Tretyakov Gallery, Zelfira Tregulova, said that 440,000 visitors have attended the show so far, making Serov's retrospective the most attended exhibition in the last 50 years, if not the entire history of Russian and Soviet museums.

Valentin Serov (1865 –1911) is little known in the West, but he is one of Russia's most important and beloved painters of the latter half of the 19th and early 20th centuries. But that doesn't quite explain the frenzy to see the exhibition, lines snaking for several kilometers in temperatures that were almost minus 20 Celsius (minus 4 Fahrenheit), or well-dressed and cultured visitors breaking down the front door to get in. To find out why people flocked to the show, The Moscow Times talked to visitors to the exbibition.

Zinaida, 75, retired: We just came in. We heard that the exhibition had been extended, but six paintings from the museums abroad would be returned so we decided to go. My husband went first and called me to say there was no line on Sunday, so I joined him. Last night I looked through several art albums to get ready for the exhibition.

Andrei, 56, translator: We wanted to come for a long time and finally made it today. I love all the history behind the paintings, the portraits of the tsar's family and the Yusupovs.

Andrei, age 56, translator: "I love all the history behind the paintings."

Alla, 77, retired: I simply adore him! It's my second visit because I couldn't manage the whole show in one go. I only knew his major masterpieces like the "Girl with Peaches" and actress Yermolova's portrait, but this exhibition showed me the scale and the volume of his work.

Alla, age 77, retired: "This exhibition showed me the scale and the volume of his work."

Olga, 32: I only knew the "Girl with Peaches," but a friend of mine, whose work is art-related, recommended the exhibit. I was very impressed by the portraits: it's like the people are alive. You look at a portrait of some woman and you think, "She's probably used to bossing people around" — and then you read the caption and it turns out you were right. 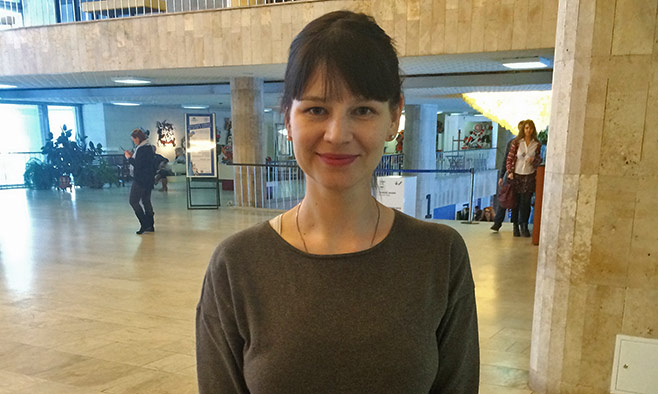 Olga, age 32: "I was very impressed by the portraits: it's like the people are alive."

Denis, 21, student: I didn't come because of the hype. I had wanted to come for a long time, but I was too busy. I liked theater-related art the most, his work for Sergei Diaghilev and his Ballets Russes, The Rape of Europa, and so on. I like it better than the portraits.

Irina, 34, psychologist: This is my second visit. I wanted to see the exhibition again before it closes — you know how you only notice some things when you see the artworks for the second time?"

This Saturday in frigid weather, lines to an exhibition of paintings by Russian artist Valentin Serov in Moscow were several kilometers long and people...
news

Visitors to Moscow's State Tretyakov gallery broke an entrance door in an attempt to enter a popular exhibition, the Meduza news website reported Thursday...
home away from home