Collegium Vocale Gent is one of the most prestigious choirs in the world. Conducted by founder Philippe Herreweghe, the ensemble is credited with having breathed new life into baroque. Performances remain remarkably faithful to the way they would have been performed during the baroque period itself, with emphasis on a rhetorical, text-orientated approach. The group's beautiful clarity of sound combined with Herreweghe's energy and authenticity make this an evening not to be missed.

Internationally recognized Canadian pianist Marc-Andre Hamelin will be performing at the Tchaikovsky Concert Hall this weekend. His solo recital will feature compositions from Debussy and Schubert among others. The program for Sunday, when he will be joined by a string quartet, is set to showcase works from Beethoven and Brahms. Consistently ranked among the elect of world pianists, he is both a mesmerizing live performer and acclaimed recording artist. Hamelin's commanding technique and rare sensitivity make for a breathtaking performance. 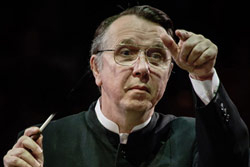 An evening with Russia's finest orchestra

Led by founder Mikhail Pletnev, the RNO is considered by many to be the leading symphonic ensemble in Russia. The RNO was founded in 1990 as Russia's first privately financed orchestra since pre-Soviet times and has rapidly gained worldwide acclaim over the past two decades. Pletnev is himself an enchanting composer and a sublime pianist. In 1978 he won the Gold Medal at the Tchaikovsky International Piano Competition, allowing him to travel widely outside the former Soviet Union. Renowned for the lustre and refinement of its performances, this orchestra is a delight to behold.

Muchnik's Picks: Antoha MC, Megapolis and More Music on the Weekend in Moscow

Antoha MC is a relative newcomer who is taking the Moscow music scene by storm. He is a one-man act who raps, plays the trumpet and even dances along...
news