Socialist Realism was "invented" in the Soviet Union in the 1930s as an artistic style that depicted the achievements of the Soviet state in tones of glory. When it became the only acceptable form of art in the U.S.S.R., it stifled artistic expression and development for several generations.

This is the standard analysis of socialist realism, but is it true? "Romantic Realism," a new exhibition which opened last Wednesday at the Moscow Manege, asks audiences to think again.

Curated by the Tretyakov Gallery's Zelfira Tregulova, the exhibition showcases over 80 paintings from the period 1925-1945, some of them on loan from the Russian Museum in St Petersburg. Many require little introduction: monumental canvases of leaders jostle for attention, such as Isaak Brodsky's pensive "Lenin at Smolny" and Grigory Shegal's avuncular "Leader, Teacher, Friend — Comrade Stalin at the Congress." Everywhere you look there are muscular shock workers and fierce Red sailors.

But as you wander on through the rooms, preconceptions are overturned. "The Spring," by Kuzma Petrov-Vodkin, retains the dreamlike quality of its creator's earlier work. Aleksandr Volkov's near-Cubist vistas of Central Asia seem both formally daring and eerily timeless — his focus on harvests notwithstanding.

Yuri Pimenov's "Woman in a Hammock," may steal the show. There is nothing recognizably "Soviet," much less socialist, in his serene depiction of a reclining woman in a bathing suit. Like many of Pimenov's other works, it seems to harken back to the golden days of French Impressionism — although the quintessentially Russian birch forest in the background leaves little doubt as to its provenience. 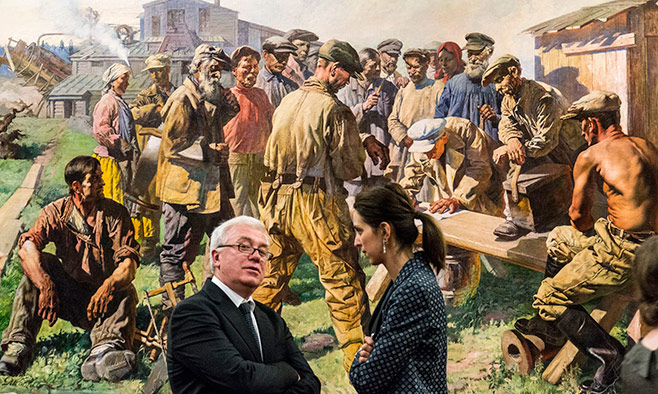 Two visitors seem to join the characters in a painting in the "Romantic Realism" exhibition at the Manege Exhibition Hall.

The more "official" paintings, however, may also prove less one-dimensional than is commonly assumed.

"It wouldn't be art, if not for the talent, wit, education, expertise, and mastery of the artists who were supposed to turn government orders into reality," the organizers wrote in the exhibition guide.

In Brodsky's "At the Coffin of the Leader, "The coffin of Ilyich wouldn't be surrounded by heavenly palm trees, borrowed by Brodsky from Rousseau's 'Douanier'," they wrote. "Petrov-Vodkin's soldiers wouldn't sit around a table with a cup in a canonical image of the Trinity, and Pimenov's 'Woman in a Hammock' wouldn't lie like Titian's Venus."

"Romantic Realism is a collection of truths, simple, yet precious to our hearts," the guide asserts. And the religious overtones of these "truths" are made clear by the layout of the exhibition.

"The collection is structured as an enfilade of sacred spaces. Every 'side-chapel' has its theme, its own icons, its own incarnation of the Soviet myth," the organizers said.

Alongside textbook themes such as the Red Army, labor and revolutionary leaders, viewers will be able to learn about the changing representation of the human body, the Soviet fascination with aviation, and the exoticized eastern outskirts of the empire, lovingly limned by painters from the Tashkent school of art.

Some of the patron saints of Romantic Realism may also surprise. Pavel Korin's enormous portrait of Alexander Nevsky casts a domineering presence in the last "inner chapel" — a testament to the Soviet regime's increasing traditionalism and reliance on national feeling.

Several more obvious icons of Soviet art are to be found in the room on architecture. A miniature version of Vera Mukhina's "Worker and Collective Farm Girl" is surrounded by competition designs by the Soviet Union's star architects. Their grandiose visions of palatial metro stations, cenotaphs, company buildings, and the colossal Palace of Soviets conjure up the Moscow that could have been, its mammoth landmarks poised between utopia and nightmare. 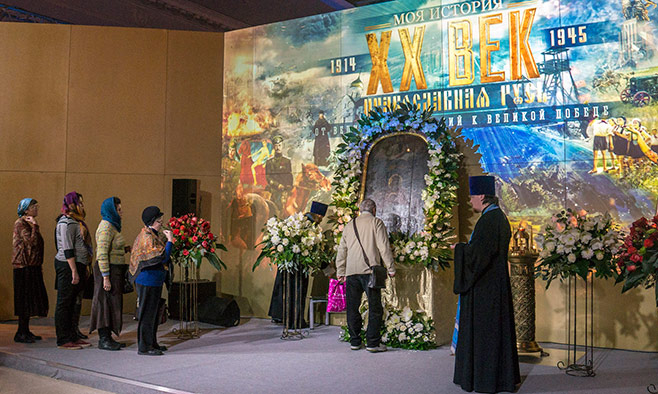 Visitors to the exhibition on "Orthodox Russia" on the main floor of the Manege Exhibition Hall venerating the icon of Our Lady, the Sovereign.

To experience a very different kind of religiosity, head upstairs to see the icon of Our Lady Derzhavnaya ("The Sovereign"), brought into the city from the Church of Our Lady of Kazan in Kolomenskoye. Shrouded in a myth of its own, this venerated image now greets visitors to the Manege's other exhibition on the main floor which charts the "history of Orthodox Russia" from the First World War to the Soviets' victory in 1945.

Getting into the building may seem something of a challenge at first — it is has been fenced off, with police officers stationed in front of all gates.Visitors to the Manege are admitted through metal detectors by the dome on the Okhotny Ryad shopping center.