Moscow tour guide Felix Maltsev, named one of the world's best tour guides by the British newspaper The Guardian, always starts his tour with a joke because he believes that foreign tourists are like children. "They've found themselves in a big toy store and gotten confused," he said during a recent interview with The Moscow Times.

The most important thing, Maltsev says, is to make them feel comfortable and relaxed at the beginning of the tour. Once you've done that, their journey into the depths of Russian culture and history can begin.

Felix Maltsev, 53, who conducts his tours in English, was included in the list of the world's ten best tour guides drawn up by The Guardian's journalists and published earlier this month.

Maltsev was picked by Phoebe Taplin, a journalist and writer specializing in culture and travel, who called him in The Guardian's article "an eccentric intellectual who has provided generations of visitors with a unique way into Russian culture and history."

The best world's guides, according to the newspaper, combine passion, storytelling skills and wit and take the visitors "beyond the obvious" to see the other side of the places in their hometown.

Maltsev adds to this list the what he calls the "right approach to foreigners" that allows him to keep cool in stressful situations.

"I once had to do a tour of the Tretyakov Gallery, which normally takes two and half hours, in 24 minutes because the tourists were hurrying to catch their flights," he recalls.

From Sideline to Occupation

A long-term employee with the travel agency Patriarshy Dom Tours in Moscow, Maltsev was educated as a teacher of Russian as a foreign language. He started to take foreign visitors on tours in 1988, when he was working at a Moscow university.

The first people he took around on his his tours were his own students, who were getting to know Moscow, St. Petersburg and other Russian cities with their enthusiastic teacher.

Maltsev said that at the time he got most of the information about Russian history from newspapers.

At that time, the Russian media had a strong educational function, Maltsev explained, and they often published articles on history and culture that provided analysis of various events. This background information still makes up half of what he talks about on his tours.

Gradually, this sideline turned into his main occupation.

"Tour guiding was just more interesting to me than sitting in the classroom and teaching irregular verbs," Maltsev said, adding that it also brought in more money than teaching.

Nearly thirty years on, Maltsev's portfolio includes more than 200 tours, among which are excursions to such must-see attractions as the Kremlin and the Tretyakov Gallery. He also does tours for more informed visitors and expats such as Stalin's Moscow or Jewish Moscow.

His first tour, Bulgakov's Moscow, based on the novel by the Russian writer Mikhail Bulgakov "The Master and Margarita," which was the topic of his university thesis, is still among his most popular tours.

Maltsev designs all his tours himself. Each tour takes a few weeks of research in the Russian National Library.

Maltsev says he does not trust the Internet, so he gathers all the facts for his tours from books.

But if a tour guide wants to take his visitors beyond the obvious, reciting facts, however remarkable, is not enough.

Tourists can find some information themselves. Maltsev said that a good guide should provide something unique: analysis of events and connections between facts where they are not obvious.

An approach like this often involves creativity. During his tours Maltsev recites own translations of Soviet poets Marina Tsvetaeva or Osip Mandelshtam. 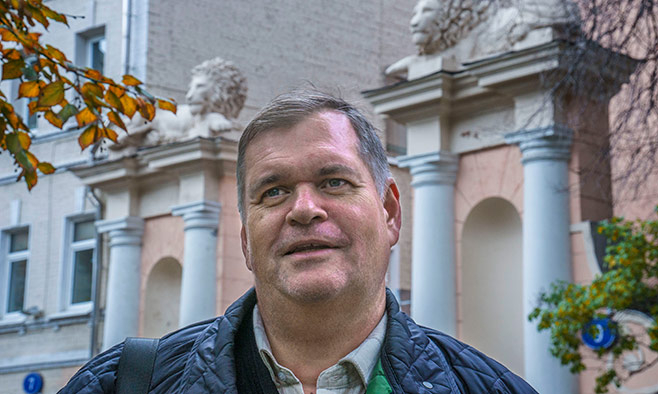 Maltsev was chosen as a great guide by Phoebe Taplin who called him "an eccentric intellectual who has provided  a unique way into Russian culture and history."

Not only has the city changed since Maltsev began his career as an independent tour guide, the whole profession of leading excursions in Moscow has undergone dramatic changes.

"When I started doing tours, there were no formalities. I could just buy the tickets for a group of visitors to any museum, go and then talk about the exhibition," Maltsev said.

Since the beginning of the 2000s, the business has gotten tougher.

The guides are now obliged to be licensed by the Association of Guides-Interpreters, Tour Guides and Tour Managers. Guides must be members in the association in order to get access to museums and other historical monuments.

Everything has gotten too bureaucratic, Maltsev said. "If you want to work as a guide today, you need to pay literally everywhere," he added.

In the Soviet Union the profession of a tourist guide barely existed since foreign tourists were scarce. When foreign visitors started to flock to Moscow in the late 1980s, there were just not enough guides to show them around.

Now the situation is reversed. After Russia's conflict with Ukraine last year, the number of tourists visiting Moscow began to fall.

In 2014, 65,000 less foreigners visited the Russian capital, down 16 percent compared to 2013, the newspaper Izvestia reported earlier this year, citing the Federal Customs Service.

According to Maltsev, the drop has been more dramatic.

Tour guides, whose work is seasonal in Moscow due to the harsh Russian winters, have seen their business collapsing even in summer's peak tourist season.

Maltsev, who used to conduct well over 20 tours a month in the summer several years ago, had less than three or four tours in the same period this year.

Today, Maltsev gives lectures on Russian history in embassies and companies to make a living.

But despite all the difficulties, Maltsev doesn't plan to change his occupation.

If nothing unpredictable happens, the situation will start to improve next year, he believes.