Since its first staging at the Bolshoi Theater in 1898, Georges Bizet's opera "Carmen" has been performed by the Bolshoi company nearly 1,200 times in 11 different productions, including a new one that made its debut on the theater's main stage in July.

On paper at least, the new production looked like an almost sure winner, with the theater's chief conductor of the past year and a half, Tugan Sokhiev, in charge of the music and the staging entrusted to Alexei Borodin, the highly regarded artistic director of the Bolshoi's neighboring National Youth Theater.

But the result proved mostly disappointing when I finally caught up with it at one of a run of performances that opened the Bolshoi's current season earlier this month.

On that evening, the theater's orchestra and chorus played and sang exceptionally well, while one of the four major roles and nearly all of the minor roles were performed with real distinction. But otherwise, there was nothing particularly outstanding on the musical side of things. As for Borodin's staging, it proved to be yet another example of how distinguished directors of spoken drama so often stumble when they turn to opera.

"Carmen" is not an opera that necessarily needs to be set in its originally specified place and time, namely Seville and its surroundings circa 1820. But it does demand creating an atmosphere of menace and unbridled passion. And it was precisely that which seemed most lacking in the Bolshoi's new production.

Given a vaguely Spanish setting of no particular time and place, the production was decorated with an array of movable, beige-colored structures that seemed promising at first, but proved tiresome as repeatedly shuttled about to form various combinations.

Borodin provided rather old-fashioned and clumsy staging that repeatedly bungled the opera's critical scenes. Worst of all was the final duet that found Carmen and Don Jose bitterly arguing at a distance as they ran back and forth across the huge Bolshoi stage, coming together only in the final moments prior to his plunging a dagger into her heart. 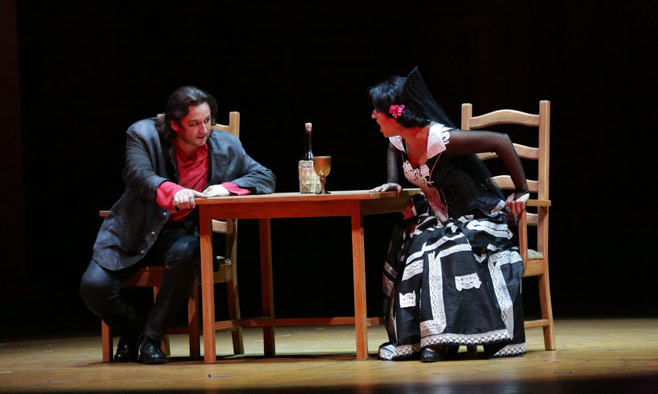 Oleg Dolgov may go down as one of the great interpreters of Don Jose.

I had expected Sokhiev to produce a much more perceptive reading of the score, considering his close association with the music of France during his tenure since 2008 as artistic director of one of that country's finest orchestras. Parts of the score were well handled, but all too often Sokhiev seemed intent on scoring points with an excess of speed and volume. And overall, he failed to convey the subtleties in Bizet's score that set it apart as one of the most original and compelling in all of opera.

Among the principals in the cast, it was tenor Oleg Dolgov, as Don Jose, who alone truly came to grips with the demands of his role. Since I last heard him at the Galina Vishnevskaya Opera Center nearly a decade ago, his voice seems to have gained considerable power, resonance and polish. And like great interpreters of the role, past and present, he moved smoothly from the lighter-voiced lyric-tenor music of the first two acts to the heavier music for dramatic tenor of acts three and four.

Armenian mezzo-soprano Vaduhi Abrahamyan possesses a very beautiful and well-trained voice, which she splendidly displayed in the florid, bel canto music of Gioacchino Rossini's opera "Semiramide" at a recent concert performance in Tchaikovsky Hall. But, as Carmen, she utterly lacked the charisma and seductiveness needed to bring the part to life.

Thanks no doubt in part to Borodin's staging, Azeri baritone Elchin Azizov proved little more than a cardboard figure as the toreador, Escamillo, though he sang the notoriously wide-ranging part quite adequately. Jose's loyal girlfriend Micaela requires a very pure-sounding lyric soprano. Anna Nechayeva began well enough in the first-act duet with Jose, but a hard edge crept to her voice that spoiled the effect of her radiant third-act aria.

The new "Carmen" could hardly help but be an improvement over its immediate predecessor, the 2008 staging by British director David Pountney that absurdly placed the entire action in the cigarette factory where the opera's heroine is employed and probably marked the low point in the Bolshoi's post-Soviet operatic endeavors. But the new production is really not one worthy of Russia's pre-eminent musical stage. Considering, however, the enormous expense that went into mounting it, the production is almost certainly one that Bolshoi audiences will have to live with for quite a few seasons. Nothing much can be done to rescue the staging, but perhaps over time the theater can give it a stronger cast of singers and come up with a more idiomatic reading of the score from Sokhiev or some other conductor.