HOLLYWOOD — There is a child in every animator. Gennady Tartakovsky is no exception.

The challenge is how to make the best use of this talent. The Moscow-born animator's first feature film, "Hotel Transylvania," threw the doors of opportunity open for him when the worldwide blockbuster grossed in excess of $375 million.

Now Tartakovsky — who simplified his name "Gennady" to "Genndy" for Americans — is back at the helm of his sequel monster adventure, "Hotel Transylvania 2." 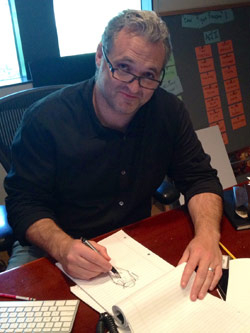 Tartakovsky doing what he loves.

For Tartakovsky it has been a long and rewarding journey in the world of animation, dating back to his childhood in Moscow during the Soviet period. As a youngster he would draw for hours on end, envisioning a world where the creations he had in his head would come to life on paper.

"I remember that 'Super Friends' on television was my favorite show in Russia. I was captivated," Tartakovsky recalled.

"I was drawing pretty much right away when I came here [the U.S.]. So I've been drawing since I was probably about 8 years old," he told The Moscow Times.

"I think what affected me most was television. You know, in Russia we had very few animated programs back in the '70s. When I came to America a whole slew of TV shows influenced me."

"Something happened to me and I just fell in love with it [making cartoons] and never outgrew it," he added. "What started in Moscow never stopped."

As a youngster, Tartakovsky recalls drawing a lot of cartoon characters. "I liked comic books. So I tried to copy from comic books. The funny thing was that I have an older brother and he was always better than me. But today I'm better." His brother became a computer programmer.

It was not until the Tartakovsky family landed in the United States that Genndy realized that he could make a living doing what he liked best — cartooning.

"When we came here, my father — who had been a dentist for the Soviet Union's national ice hockey team — bought a television," he remembers. The TV became his school. "Every Saturday I would be up at 6:30 a.m. to catch the Hanna-Barbera cartoons." Little did he know as a child that by his early 20s he would be working as an art director for this prestigious animation studio.

Soon the budding artist enrolled in the animation program at the California Institute of Arts, a Los Angeles college founded and funded by animation pioneer Walt Disney. "I took a shoe box full of my drawings with my application and that did it. I was accepted," he said.

It was here that a student project became the basis of "Dexter's Laboratory," a comic science-fiction animated television series on Cartoon Network that launched Tartakovsky's career and won several prestigious awards, including an Emmy. It caught the attention of mega producer George Lucas, who signed him to spearhead "Star Wars: Clone Wars," an instant hit on the Cartoon Network, followed by another science fiction series, "Sym-Bionic Titan," in 2010.

At this point Tartakovsky's career as a full-fledged animation writer and director was launched.

Tartakovsky is renowned for his focus on storytelling. "What's important is the character, the humor, the animation. The computer is just a pencil," he explains, distancing his work from that of DreamWorks, Pixar or Fox studios' computer generated films.

"Hotel Transylvania 2" follows his vision of animated storytelling. The plot of this 3-D Sony picture is more complex than other computer generated movies. The story picks up from the first "Hotel Transylvania" as Dracula's rigid monster-only hotel policy has finally relaxed, opening up its doors to human guests.

But Drac, voiced by Adam Sandler, is worried that his half-human, half-vampire grandson isn't showing signs of being a vampire. Dracula enlists his friends to help him make the grandson a vampire. However, an unexpected visit from Dracula's very old-school, human-hating dad Vlad soon turns things upside-down at a family gathering at the hotel.

"I thought it was appropriate to give the grandfather Dracula a Russian name since the [voice] part is played by Mel Brooks, who has Russian roots on his mother's side," he explains, adding, "He tried a number of accents, from Romanian to Russian, finally settling on a funny mixture.

"I have high hopes for this film in Russia," Tartakovsky told The Moscow Times. "My last movie was very well received. People liked the characters."

Reflecting on a recent visit to Moscow, the Russian native said, "It was an amazing experience. I found things so different there after many years of absence. I was surprised at how cosmopolitan it had become." He was awed by outdoor advertising and foreign cars. "When I was a child taking the train to school, we would see no such things.

"On our visit we were warmly received. People were so nice and I had great time," he said, adding, "Wouldn't it be fun to do a film based on Russian traditions?"

"Hotel Transylvania" will open in Russia on Oct. 22. as "Monstry na kanikulakh 2" (Monsters on Vacation 2) with the distinguished actor Valentin Gaft playing the part of Vlad — Mel Brooks' role in the English version.