The irony of this situation was not lost on restaurateur Yevgeny Katsenelson. The man behind legendary bohemian restaurant Nostalgie, the trendy Courvoisier Cafe, and the take-out chain Karavayev Brothers saw an opportunity in the lack of high-quality, affordable, authentic Russian food. Katsenelson decided to close his Izya Grill and open a Russian pub in a new space on Bolshaya Lubyanka.

Within the walls of the new restaurant, called Chagin, Katsenelson serves up authentic domestic food from southern Russia, quite bravely going against the two main pillars of modern fine dining — health-consciousness and minimalism. Chagin’s cuisine is the real thing — hearty, spicy, salty, based on lots of high-fat ingredients and served up in lavish portions.

Although Katsenelson had thought about trying the concept for a long time, it was a meeting with chef Roman Kuzhelev in Sochi that pushed him over the edge. Now Kuzhelev is serving up food from the relaxed lifestyle and warm climate of his native Stavropol region in Russia’s south from Chagin’s kitchen. “Yes, south Russian dishes are nourishing, abundant, not at all dietetic, but they are delicious. And it’s a pure tradition without any adaptation,” said the chef. “We do not cook for people who count every calorie and measure their waist every morning. We cook for people who really love to eat, and I try hard to make them happy.”

Trying hard is very much an understatement here. Many of the dishes on Chagin’s menu are far from easy to cook. For instance, one classic of the Russian table, a kind of head cheese called zelts, is made from cuts of pork and pork byproducts that must be boiled for hours. Chagin’s version of the traditional Russian spicy-sour soup solyanka contains five types of specially made sausages as well as smoked pork ribs. The chef also shows off his knowledge of Caucasus cuisine with chips made from the flat bread lavash flavored with spicy adjika and a version of the bean dish lobio made by combining white bean puree and whole red beans. Perhaps the most gluttonous item on the menu is the pork ribs served “without limits” — 700 rubles buys all you can eat.

“And don’t think that it’s a man’s meal,” says Alevtina Makarova, Chagin’s PR director. “Come to us more often and you’ll see a lot of glamorous girls who eat this with their fingers.”

But here Makarova may be stretching the truth a bit. Chagin’s cuisine is designed to appeal to a real “muzhik.” However, its hearty, in-your-face menu is paired with a quite refined selection of trendy beer. Although the owners call the restaurant a “Russian beer house,” most of the beer in the menu has little to do with Russia. They offer four beers from the small Moscow brewery Trigger; the other 17 have their roots abroad. “The idea was not to follow just Russian beer-makers,” Makarova said. “We like to surprise our guests, let them taste something new.”

It would be difficult to surprise Moscow beer lovers with a glass of Timmermans Kriek or Blanche de Bruxelles, the two selections that open the beer section of the menu. Fortunately, the options further down the list are more interesting. There’s the legendary Belgian triple fermentation ale Bourgogne des Flandres that is malty and fruity with a touch of caramel flavor, and the Belhaven Craft Pilsner, which features a biscuity aroma, hints of honey and herbs. It’s a more-than-weird companion for the zelts, but nonetheless, it is definitely “something new.” 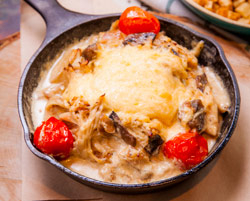 Preparation:
1. Saute the chopped carrots in a dry skillet (no oil) until softened and brown. Add to a large pot with the chicken, bay leaves, peppercorns and two whole onions in enough water to just cover it all for 4 hours. When cool enough to handle, pull the meat off the bones.

2. Chop mushrooms and the rest of the onions, then saute gently in butter in a large skillet. Add the chicken with a small amount of broth and stew for about 20 minutes. Then add the heavy cream and cook on low heat for another 5 minutes.

3. Separate each potato into 4-6 pieces. Place them on the bottom of a baking pan and pour on the chicken and sauce. Arrange the tomato slices on top.

4. Cover with grated cheese and bake in a hot oven (200 degrees Celsius or 400 degrees Fahrenheit) for about 15 minutes, until the cheese bubbles and begins to brown.