If you were planning on hitting the mall this weekend to buy your kids new school shoes and notebooks — don't. The crowds will be horrendous. Instead, keep the kids in sandals and sample one or more of the city's weekend festivals. Want to pretend you're in a camel caravan crossing the dessert? Got it. Obsessed with flying machines? Got it. Wonder what kind of jam Lev Tolstoy spread on his toast? Got it. No matter what age you are or what interests you have, this weekend there's a festival for you. Best news yet: It's almost all free.

The traditions of both the old and new East come to Moscow's Hermitage Garden on Saturday when Abu Dhabi Fest takes over the park. Visitors will be able to stroll through an Arabian bazaar, sample national delicacies at the food market, and dress up and be photographed in Arabian clothing. When you're not being delighted by wafts of Arabian music, playing a round of mini-golf, or having your hands painted with henna, head over to the Formula 1 stand, where the Abu Dhabi Grand Prix will be being recreated. There you can race remote-control cars on a model version of the racetrack, and for the more firm of stomach, leap into an incredibly lifelike simulator and take a spin around the track. Round off the day by watching an Arabian film under the stars at the festival's open-air cinema.

The biennial spectacle of aerial wonder and flashing of cash is back and open to the public this weekend. Aircraft of all shapes and sizes, both military and commercial, will be on display, and many of them will be rushing close above your heads during the demonstration section of the weekend's program. So popular is the event that the roads leading to Zhukovsky will be utterly jam-packed: we recommend taking a suburban train from Kazansky Station to either Otdykh or 42nd Kilometer stations where there will be free shuttle buses to the show.

Muzeon and the Federal Press and Mass Media Agency are hosting a food fair with a literary bent: more than 30 publishers will have their cookbooks for sale, and the master classes and demonstrations by some of Russia's most famous and best food writers and chefs will focus of food in literature and history. Want to know how jam was made at the Tolstoy estate? Or how to make the cucumber sandwiches that Oscar Wilde ate? While you're sampling delicacies on paper and on plates, your kids can enjoy themselves in the kiddie lit corner from noon to 8 p.m. 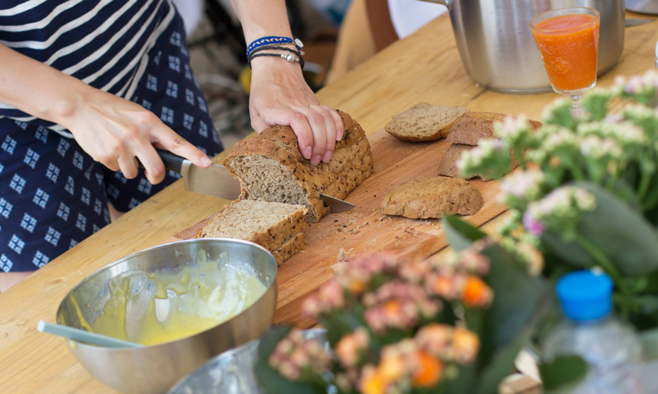 At Food for Thought, you can dip into both cookbooks and delicious dishes.

The Equestrian Festival "Russia on Horseback" will be held at Sokolniki Park. Event organizers are making use of the anniversaries of two major battles to present a military spectacular on horseback this weekend. Last weekend saw the anniversary of the Soviet victory over Nazi Germany at the Battle of Kursk, and next weekend sees the remembrance of the Battle of Borodino against Napoleon in 1812. On Festivalnaya Ploshchad of Sokolniki Park there will be dramatic demonstrations of the horses' might in battle by the cavalry school of the hussars, consisting of equestrian parades, trick-riding and engagement with weapons, all taking place in the recreated setting of a field station in the midst of a battle. When you're not being amazed by these majestic beasts, you can get some snaps with the horses in their enclosures, brush up on equestrian history at a museum of horse equipment, try your hand at being a blacksmith at a forging workshop, and, of course, you can trot around on a pony. Or your child can.

In preparation for marathon online reading of works by Anton Chekhov in September, the Pioner open-air cinema at Gorky Park is hosting two lectures about the author. Saturday's lecture will be given by theater director and passionate Chekhov specialist, Yelena Gremina, about traces of Chekhov's characters and stories in modern life, while Sunday's from journalist and writer Denis Dragunsky has the tantalizing title of "Women, Destiny and Tasty Things." Feed your inner egghead.