For residents of central Moscow, Mitino, a bedroom community in the city's northwest just outside the Moscow Ring Road, would not be considered in any way a destination. But this neighborhood of about 185,000 residents is in high demand among young families and features a number of stores catering to vegans and others interested in living a healthy lifestyle away from the pollution and congestion of the city center.

Mitino, which was incorporated into Moscow 30 years ago, was ranked third for environmental-friendliness in a list of the capital's 125 neighborhoods released earlier this year. The study's author's cited the lack of factories in the area as well as the leafy forest that surrounds the region as the reason for its strong showing.

In addition to the forest, the neighborhood also boasts a large park of more than 300 acres that features a pond, baseball field, bike lanes, swimming pool and a chapel. In the next couple of years, the park is scheduled to undergo a major restoration planned by a team of architects. When the renovation is completed, the park will have new benches, terraces and a greenhouse.

Artyom Mitin, the deputy head of the Mitino Council of Deputies, told The Moscow Times, "many people with small children prefer to live here, as it's a perfect place to start a family."

The area has low levels of crime, according to police department statistics, and is also generally affordable by Moscow standards.

But Mitino is more than a collection of statistics. The region has attracted a community of residents interested in living better together.

Yoga classes are held two times a week in the landscape park. Yekaterina Grishina, the Yoga in the Park project coordinator in Mitino told The Moscow Times, "All 25 mats are always busy."

Local official Mitin sees uniting those who love sport as an important part of his mission. "Around 150 people regularly take part in the 'Healthy Spirit' competitions we organize in the park — it's powerlifting, cycling and jogging sessions," he said, adding that his team has launched a hashtag, #mitinozasport ("Mitino for sport"), to promote their activities.

The Mitino branch of the Youth Parliament, an organization sponsored by the city of Moscow to promote the involvement of young people in politics, also organizes sporting events and other activities. 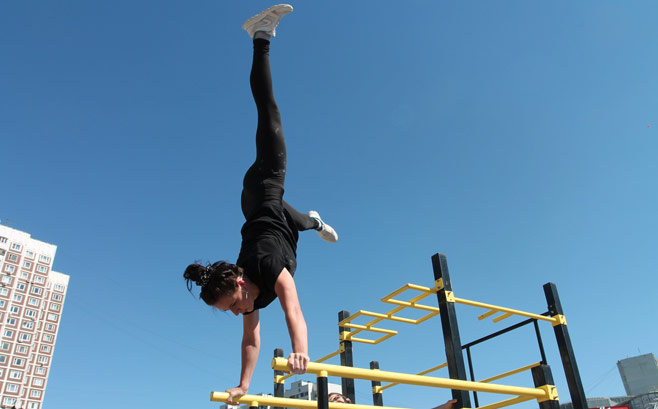 Many Mitino residents share an interest in sports and healthy lifestyles.

When they aren't playing sports or getting involved in local politics, young people in Mitino hang out at the Lounge cafe, which shows movies late at night and organizes pool tournaments. There is also a twice-weekly English-language club where Mitino residents can practice their language skills. Native speakers are always welcome to join. Meetings are posted on the club's VKontakte page.

One notable feature of the region is its strong vegetarian and vegan community.

Lyudmila Dariyenko, the owner of the Happy Vegan Shop, which has its first location on the Arbat in central Moscow, told The Moscow Times, "The client database for our online shop showed us that surprisingly a lot of people in Mitino ordered vegan food, so we decided to set up in this location."

Other local businesses are also concerned with living organically and locally.

Olga, the owner of the eponymous beauty salon on Ulitsa Baryshikha, is a vegan and employs three other vegan hairdressers. "In our salon we use haircolors that were not tested on animals," Olga told The Moscow Times. "I don't want any animals to suffer."

Ruslan Khoroshilov, 28, who owns the Red Fennec art supply store, also features animal-friendly products in his shop. "We sell watercolors that were produced without using bull bile," Khoroshilov said, adding that he has been a vegetarian since the age of 13.

Many of Khoroshilov's customers study art at the Stravinsky Art School, which Moscow Mayor Sergei Sobyanin named one of the best in the city after its new building was opened last year. In addition to new classrooms with the latest features, the school, which can accommodate 800 music and art students, has three organs.

Mitino is located near several large shopping centers with typical clothing stores and supermarkets, but locals don't have to spend money to acquire new and interesting things. Visitors to the Mitino Free Market bring old clothes, furniture, household items and artwork to exchange for similar items from someone else. The Free Market posts notices about its events in the VKontakte group Dobroye Mitino (Kind Mitino).