Look at the hands of a middle-aged marshrutka driver, and you may see them ornamented with tattooed rings, letters or symbols. More than likely, the fading images on his skin are not a sign of a youthful whim, but contain a message from a former life in Russia's criminal underworld. In Soviet Russia, tattoos were a unique language, with messages of rebellion and a yearning for freedom hidden within.

A prisoner's tattoo served as an illustrated biography, with each stroke indicating the crime committed, family relations, drug addictions, search for a sexual partner or position in the prison hierarchy. For example, an image of a reindeer facing the sun meant imprisonment in the high-security prisons of the North — Siberia and the Urals. A tattoo of a pirate with a knife between his teeth was a call for violent rebellion. If the pirate also had an earring, the carrier of the tattoo was convicted for burglary.

If a prisoner asked a newcomer if he stood by his tattoos and didn't get a satisfactory answer, the inmates forced the newcomer to scratch the tattoo off with a brick or glass. If he wouldn't submit, he'd be beaten — sometimes to death — for wearing a "false" symbol. Prison tattoos were made with an electric shaver, to which prisoners attached a needle and a container of liquid dye. As a result, men and women with tattoos in the Soviet Union stood out not only as criminals but also as carriers of HIV and other diseases. In the Soviet era, a tattoo meant trouble both inside and outside the cell.

Given this history, it is no wonder that many Russians, especially among the older generations, have a negative attitude toward them. Yelena, 52, said, "If I see a tattoo today, I automatically think of livestock branded with a hot iron. To me, it means that you belong to something or someone, and I do not understand the desire to not be your own person." Nikolai, 42, agreed. "A man should decide for himself whether he needs tattoos or not, but I would not advise hanging around former prisoners if you have them. In my opinion, muscles are a better decoration for a man anyway."

The millennial generation, on the other hand, has a different point of view. Many young Russians celebrate tattoos as works of art for which they serve as canvas. For them, the symbolism is personal. Muscovite Valery, 25, has four tattoos and plans on getting more. He said, "My tattoos are simply images on my body that I love, and it feels as if they have been a part of who I am forever. I think that Russian tattoos are at a crossroads right now, and talented Russian tattoo artists are writing a new history. The past is the past. This is a new era." 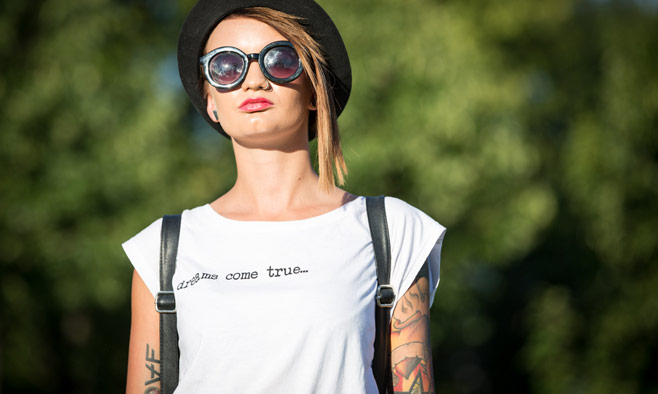 Modern tattoo artists not only use safer technology and top-notch techniques, but also have utterly changed the purpose of a tattoo. In an interview with The Moscow Times, Igor Tangen, a graphic tattoo artist inspired by everyday emotion, music, books, and painter Gustav Klimt, described his own approach in Russia's fairly new artistic tattoo culture. "All of my work combines the aesthetics of some everyday sadness felt by people in the big city, with motifs of alienation and loneliness. However, there is nothing destructive nor depressing there. It is a sadness familiar to everyone, and in my opinion, it is a necessary feeling. My work is not rebellion, but my vision of aesthetics, and that is the essence of a tattoo."

Today young Russians judge a tattoo by aesthetic considerations and don't see it as a way to rank a convict in the prison hierarchy. Tattoo artists use stippling, graphics, abstractions and color, line-work, realism, and even watercolor. They combine Russia's rich artistic culture with contemporary tattoo techniques and technologies.

But some tattoo artists embrace the Soviet past. In an interview with The Moscow Times, Love Life Tattoo artist Andrei Kitchatov commented, "Prison tattoos have a vast range of themes — there is much to draw inspiration from. And I'm not the only one inspired — I see those themes in the works of tattoo masters not only in Russia, but also in Europe and the U.S. The main thing is not to forget the Soviet prison tattoo generation. It is a part of our history — the history of Russian tattoos. We must cherish it."