Russians are notoriously sensitive about what other nations think of them, politically as well as culturally. The image of bears wandering the streets and rows of folk-dancing babushkas reeling around Red Square is a stereotype that has pervaded the non-Russian world for years now. Having an idiosyncratic president who frequently engages in extreme sports and shirtless wild animal hunting may not instil a huge amount of confidence in Russians who hope to be taken seriously by other nations. This week there have been several events that let Russians see just exactly how foreigners see them and their capital.

Last Thursday a photography exhibition opened in the business square of Romanov Dvor, entitled "Moscow Through the Eyes of Foreigners" (Moskva Glazami Inostrantsev). It consists of photographs taken by Moscow-based expats, each a unique vision of the artist's perception of the city. This project is the brainchild of Maria Pankratova, PR representative of the RD Group, which is currently renovating the adjacent Romanov Alley. Pankratova said she wanted to see "how the city looks to people whose culture and traditions are different."

The majority of the photographs were done by employees working in the offices surrounding the business square. Others were from the press associated with the event, including The Moscow Times' own Pascal Dumont. A few independent artists completed the collection. Contrary to what you might expect, the exhibition contains very few "touristy" shots — there's nary a glimpse of St. Basil's Cathedral or the Kremlin. Each entry is accompanied by a description of the artist's inspirations.

Attendants at the opening ceremony voted for their favorite photograph. The winning entrant was Pascale Bazire, a French photographer who has lived in Moscow for the last two years. Initially a painter, she switched to photography to avoid working in the confines of her apartment and to be able to get out and see the city. "I search for the Russian soul in all the people I meet, and more than once it has shone in a smile, in a piercing look, in a shared moment." Fellow French artist Marie de la Ville Bauge, whose work is currently being exhibited in a solo exhibition at the Romanov Dvor Art Gallery until July 13, described the inspiration behind her own photograph, a much more abstract entry than the others: "When I walk alone in the streets [at night], Moscow reveals its joyfulness, its energy flows, and the city allows its gigantic drama to be deeply felt."

The exhibition runs until July 15. While perusing the photos you can enjoy a drink at Correa's cafe, which opened at the start of the month.

In other cultural mediums, one of the films at the 37th Moscow International Film Festival, "Moscow Never Sleeps," is directed by Irish filmmaker Johnny O'Reilly, who has lived in Moscow for past 12 years. It is his second feature film in Russian after his 2010 feature "The Weather Station." He claims that the film is his answer to the oft-posed question: "'Why do you live in Moscow?' as if I'm living somewhere in Afghanistan."

When explaining his intentions in making the film, he said that he didn't wish to "whitewash" Moscow. "I just want to present a balanced vision of a vibrant culture that is far too often perceived through the polarizing prism of nationalism and geopolitics."

The film itself, a fine example of "hyperlink" cinema, is a dramedy featuring a number of interweaving story lines (think "Magnolia" or "Short Cuts"), all of which take place over the course of a single day and night. Aside from the opening and closing shots, only a native Russian would recognize Moscow as the setting, since the number of "touristy" shots is minimal. 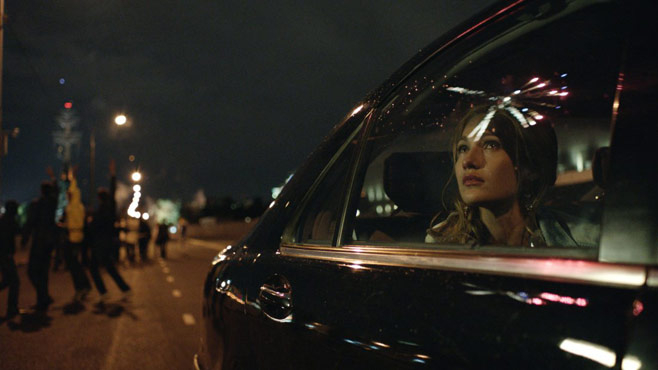 A character in O'Reilly's "Moscow Never Sleeps" contemplates the city.

It is really more of an examination of ordinary characters. People laugh, cry, fight and fall in love. No balalaika-playing matryoshkas to be found here. The opening dialogue in the film sets the movie's humorous tone. Upon waking up in a hospital bed, one of the characters asks a nurse, "Heaven or Hell?" When told the location of the hospital he's in, he dryly responds, "Moscow … must be hell then." The frequent laughs from the mostly Russian audience really belied the stereotype of Russians lacking a sense of humor. Indeed, the reaction from native Russians, according to the director, has been encouraging. "Most people are surprised that [the film] has been written by a foreigner, because it feels so real and true to them. I think the reason they are surprised is because there are so few foreigners living and working here in any creative field. Given that it is the biggest city in Europe, and most expats agree that it's a great place to live, why are there so few foreigners living here?"

"Moscow Never Sleeps" will have its theatrical release in Russia on September 15.

The rare phenomenon was visible in many parts of Russia.
The MT List

For the first time the St. Petersburg International Economic Forum focused on the creative industries.