It is the kind of gimmick that could easily have sunk the ship. In fact, it's probably what keeps it afloat.

I am talking about Filipp Grigoryan's decision to cast star journalist Ksenia Sobchak in the role of the matchmaker in a production of Nikolai Gogol's "The Marriage" at the Theater of Nations.

It would be difficult for any single actor to stand out in this eccentric, kitsch-laden production. Grigoryan, who designed and directed, uses huge video screens, garish lighting, deep pop references, quirky, colorful costumes, exaggerated modern furnishings and thundering music by Valery Vasyukov, Mitya Vikhornov and Dmitry Garin to provide a visual and audio attack on his spectators.

And yet, Sobchak comes out on top of all the turmoil. In fact, she even acts a little. She didn't have to. She's a celebrity, a "personality," and she would have been quite within her rights merely to toss her fame out on stage and let it work for her.

Gogol wrote the role as an actor's showcase, a character who comes out, wreaks havoc, and disappears when overmatched. Sobchak could have played it that way. But she actually does an admirable, quite funny, job of creating a character that intrigues us and encourages us to follow her movement through the play.

For all of Grigoryan's efforts to make his production wild, woolly and hilarious, it often doesn't work. Many jokes fall flat, and several suggestive drum rolls evoke no applause or laughter. You constantly feel this production trying too hard to impress you, which often makes you recoil in defense from it.

But that is right where we come back to Sobchak's surprisingly nuanced interpretation of Fyokla the matchmaker. She is quick, she has excellent timing — which anyone who watches her famous interview shows knows in advance — and she is a generous partner on stage. She doesn't hog attention, she lavishes it on others.

Vitorgan plays the man, who is intrigued by the idea — but not the fact — of marriage, as something of a clueless teddy bear. 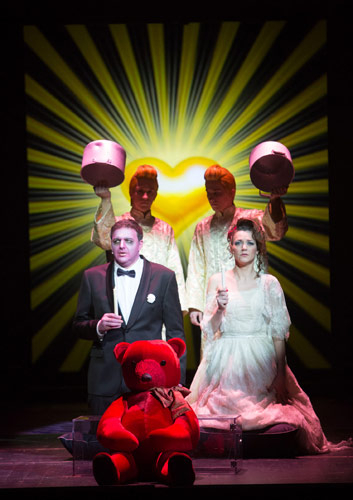 Enter his friend Kochkaryov, a cork-snorting, hash-smoking thug who will marry his friend off even if it kills him. Vitaly Khayev plays the role with the underlying sense of violence and chaos that he often brings to his work.

Before this unlikely duo can secure the hand of the bride Agafya Tikhonovna (Anna Ukolova) as Podkolesin's betrothed, they must outlast a trio of equally eccentric suitors.

Grigoryan uses these scenes to ratchet up the political satire, in part by turning the characters' conversations into the questions and answers of a press conference.

When the bride ponders the difficulty of making a choice among such marvelous potential mates, she does so standing over a voting urn.

One suitor, Yaichnitsa (Oleg Komarov) is an OMON officer who pulls out his intestines in order to get to the heart that he wishes to offer the prospective bride. Another, Zhevakin (Sergei Pinegin), is dressed in an old sea-diving suit.

Aided by the cheating moves of his belligerent friend, however, Podkolesin wins the day. And he seems quite pleased with his future mate until a word here and a word there accidentally remind him that, perhaps, freedom is better than wedlocked bliss.

Before he knows it, he has slipped away and everybody's plans are turned upside down.

Grigoryan throws everything he's got at the finale. He seemingly sets the stage on fire while cribbing an image from the opening scenes of the "Mad Men" television series: An animated figure of Podkolesin tumbles down, down, down through the air to certain doom.

But if Gogol let things lie at the moment that Podkolesin escapes, Grigoryan looks at what might now ensue in modern-day Russia.

The result is a police crackdown on citizens, as the rebuffed OMON officer steals a kiss from the jilted Agafya, while Ksenia Sobchak, now back in her dressing room, can be seen on a monitor removing her makeup.