Moscow has a new museum dedicated to the work of an artist described as "the best Russian graphic artist" by Pablo Picasso, "the Russian Daumier" by Jean Cocteau and "the Russian van Gogh" by countless others.

The artist, Anatoly Zverev, was a leading figure in the Soviet underground movement in the post-Stalin era. Born in 1931, he spent all of his life in Moscow, where, from the late 1950s, he became a prominent figure in the Soviet Nonconformist movement. During a time when Socialist Realism was the only truly acceptable form of art, Zverev's expressive, unconventional style was anathema to the state. No exhibitions of his work were held until shortly before his death in 1986. Continually harassed by Soviet authorities, Zverev lived a hand-to-mouth existence and relied on a close circle of friends to support him. In his early days as a painter he earned money to buy paint by playing checkers in local parks. Nonetheless, he enjoyed great success and popularity both in the Soviet underground and abroad.

The AZ Museum was opened last month by Natalya Opaleva and Polina Lobachevskaya. "For me Zverev is a source of energy — of creative, emotional, spiritual energy. I want to share this energy with others," writes Lobachevskaya on the museum's website. Initially consisting solely of works collected by Opaleva, the museum's collection received a huge boost later that year when the daughter of renowned Soviet art collector George Costakis, who worked closely with Zverev, donated over 700 of Zverev's works from her father's collection. Now the museum has more than 1,500 works, as well as over 500 by other Nonconformist artists from Zverev's circle, including Oskar Rabin and Oleg Tselkov, who along with Rabin and several other artists organized the unofficial "Bulldozer Exhibition" in 1974, which was broken up by police forces.

The inaugural exhibition at the museum is entitled "AZ — That's Me!" The three floors of the museum feature 41 works by Zverev, including self-portraits, paintings of the artist's friends and patrons, and depictions of Oksana Aseyeva (1892-1985), who has been called the love of his life. The ground floor consists of a large, almost empty room, with an ongoing projection onto one wall showing various images of Zverev and his work. The second floor is named "Around and About" and shows many of the paintings Zverev drew of his close friends, family, and other acquaintances. 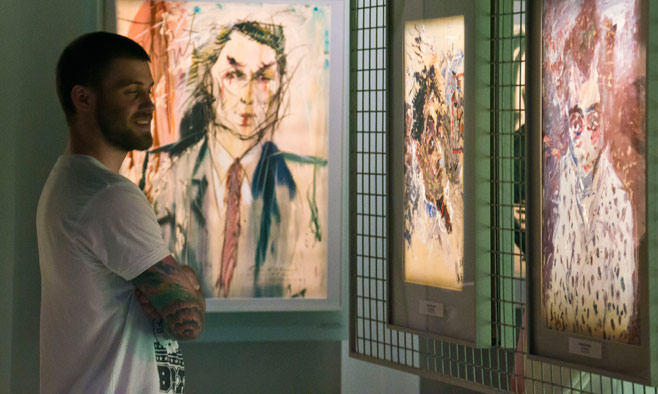 A visitor to the AZ Museum checking out three Pollock-esque paintings.

Zverev once said: "How have I lived? I have never lived; I have existed. I have only ever lived when I've been with you [my friends]." The range of style in this very personal collection is immediate upon entering the room — some are quick sketches on canvas, others are formed with layers of paint so thick that they have an almost 3-D quality about them. This style of painting, Tachism (from the French word tache meaning stain), has been compared to the work of Jackson Pollock. One unifying feature of all the paintings, however, is their rough, unfinished style.

Many of the subjects of these paintings are foreigners, including figures of authority such as former UN leader Dag Hammarskjold and Agnes Jarring, wife of former Swedish Ambassador Gunnar Jarring. Collection coordinator Alexandra Volkova explained how a penniless underground artist managed to meet such illustrious clients. George Costakis, who was one of the first to discover the genius of Zverev's work, worked at the Canadian Embassy in Moscow, and would introduce arriving foreign dignitaries to local artists. "Zverev would be smuggled through security in the backseat of a car to meet the subjects of his portraits," Volkova said. "Costakis wanted to help Zverev earn a living, and this was his way of doing so." These foreign relationships explain both Zverev's unpopularity with the Soviet authorities and his popularity abroad — exhibitions of his works have been held in the United States, Germany, Greece, and Japan.

The third and final floor is devoted entirely to Oksana Aseyeva. She married the poet Nikolai Aseyev in 1916, and in her youth she was friends with artists and writers such as Vladimir Mayakovsky, Sergei Yesenin and Boris Pasternak. She met Zverev in 1963, five years after her husband's death. She was 40 years his senior but became his muse. He painted hundreds of portraits of her, and dedicated numerous poems to her, over a period of 17 years until her death in 1985.

Zverev died a year later, and it was only after his death that he became well-known outside the underground art movement. The museum intends to bring Zverev the attention and acclaim he so deserves and cement his place as one of the great Soviet artists.

The current exhibition runs until the end of September. Due to its small size, the museum operates on a "session" basis. Guests must book a slot in advance, usually lasting two hours. AZ Museum. 20-22 2nd Tverskaya-Yamskaya Ulitsa. Metro Mayakovskaya. 495-730-5526. museum-az.com.