Ivan Goncharov is not the writer who jumps to mind when you think hip, universal, classic 19th-century Russian prose.

Sure, his novel "Oblomov" is a central brick in the Russian cultural iconostasis. But I suspect that "A Common Story," a novel he wrote in 1847, 12 years before "Oblomov," collects plenty of dust on people's bookshelves. Assuming they own a copy, of course.

By now you're just waiting for the "but," and, without further ado — here it is.

But that was until Kirill Serebrennikov took on the story for a slick new production at the Gogol Center.

Serebrennikov took off the gloves when he wrestled this work down. He completely reset it in modern times, with cell phones and trophy girlfriends and shaved-head crooks. The language is the language we speak, or, at least, hear spoken. The sensibilities, the clothing, the settings, the anxieties, the moral traps are all entirely familiar.

The basic premise is as old as civilization itself — a bright-eyed, bushy-tailed young man from the sticks heads for the big city with grand ideas in his head. And the outcome is no different from what you would expect — life whacks the kid up the side of the head. End of common story.

But no. It's not the end of the story, for the tale of this production is the journey, not the destination. And both Goncharov and Serebrennikov provide us with a gripping tale of good and innocence getting their comeuppance.

It doesn't hurt that the two leads, the two individuals set up to destroy each other as they sort of help each other along, perform brilliantly.

Filipp Avdeyev plays Sasha, a young kid bursting with energy, talent, ambition and ideas. He plays the guitar and writes songs, and when he gets to Moscow, he's going to make it big. How could he possibly fail? Particularly when he has an uncle in the city, rich and connected. This is going to be easy.

Uncle Pyotr is played by Alexei Agranovich with a chilled, calm control that doesn't quite entirely freeze others out. There is a half-percent of life still glistening in his eyes, playing on his gestures. Sure, he's dead to the world — it has turned him into a cliche, a robot that answers to money, power and influence. But there's something left — not enough to save his soul, but enough for us to see his soul was once salvageable. 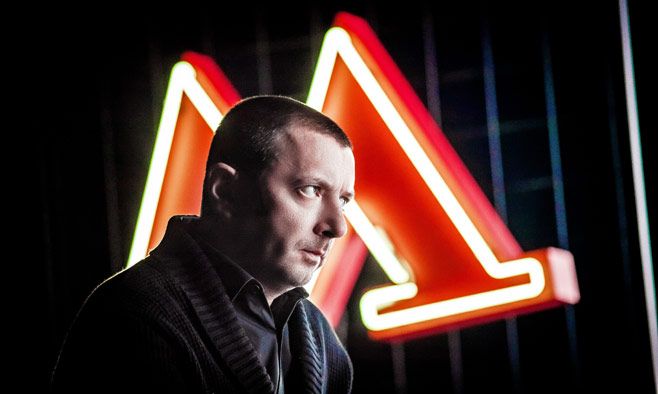 Serebrennikov, who also designed and wrote the adaptation, puts the characters in a kind of dark, black hole. The stage is barren, forbidding. An occasional metro sign or sweater provide splashes of color, but things here are bleak.

The action usually proceeds deliberately and quietly, like the calm that precedes a storm. But there are explosions, localized and quick. Pyotr, sporting a friendly, but icy, smile asks to play a few chords on Filipp's guitar and the kid is delighted.

Until the elder takes the instrument and angrily smashes it as if he were Pete Townshend.

Does Sasha actually come to love the older woman Yulia (Olga Naumenko) who will buy him fame? Or is that a broken man making a deal with the devil? A bit of both, perhaps, but it comes to no good end.

Pyotr's girlfriend Liza (Yekaterina Steblina) lends her boyfriend a slight air of humanity. But it's not nearly enough to save him, or his kid nephew, whom she tries to take under her wing with no success.

Sasha hangs onto his purity and goodwill longer than one might expect. But when it goes, it's gone fast.

That is what Pyotr has been angling for all along — to snap this kid out of his delusions. And yet, at that moment when he finally sees that he succeeded in his task, he learns he has prepared his own final humiliation as well.

This harsh, relentless tale is buoyed at times by Sasha's joyous warbling with his guitar, and by an onstage pianist (Andrei Polyakov) who provides live accompaniment to developments good and bad.

My hat's off to Serebrennikov, who showed me a Goncharov I had no idea existed. As for Goncharov — my respect. Add "A Common Story" to that long list of great Russian novels.