It's not uncommon to see a cat in a Moscow supermarket or walk past one in an office window, but until now there has not been a cafe devoted entirely to cats — nine of them in a small, if cozy, room.

"Kotiki i Lyudi" or Cats and People, which opened at the start of this month near Tsvetnoi Bulvar metro station, is the first cat cafe — a phenomenon that is popular all over the world — in Moscow, and you already need to book weeks in advance to drink tea with the moggies.

The cafe, with the slogan ''We will make Moscow warmer and furrier" is packed every day with those eager to make friends with its furry inhabitants.

Marina Nazonova came to the cafe with her son Sergei after hearing about it from her friend, the owner of a cat shelter.

She used to have a lot of cats, but all of them apart from one died. ''It's hard to cope with a loss of a beloved animal," she said. "This place can help you.''

The first cat cafe appeared in Taipei, the Taiwanese capital, in 1998 and quickly spread to Japan, where it is especially popular as landlords are often against keeping pets in rented apartments.

The Moscow cafe's raison d'etre is to find a new home for the cats. Any visitor has the chance to adopt one of the cats, said Oleg Agranovich, one of the cafe's co-founders.

All the cats, which come from the homeless pets foundation, "Khochu Domoi," or I Want a Home, have some kind of history.

Belek, an adorable snowy white cat, is one of the most gentle and friendly animals in the cafe, said cafe worker Iva Ivanova. He fell out of the window at his previous owner's and broke his leg. Surgery cost a lot and the owners balked at paying. They simply left him in a box at the vet's. The vets cured Belek anyway, but he now limps because of the wire in his paw.

''We have invested a lot of money and put our heart and soul into these cats, so we would like to find decent guardians for them,'' said Agranovich.

The cafe is very protective of their charges and when a potential adoptee appears, the cafe will send someone to first check where cat will live before approval is given.

None of the nine cats have been adopted so far. All of them are neutered, vaccinated and microchipped. ''Our cats have passed more medical tests than cosmonauts usually do,'' said Agranovich. The cats are also examined once a week by the local veterinary clinic, he said. 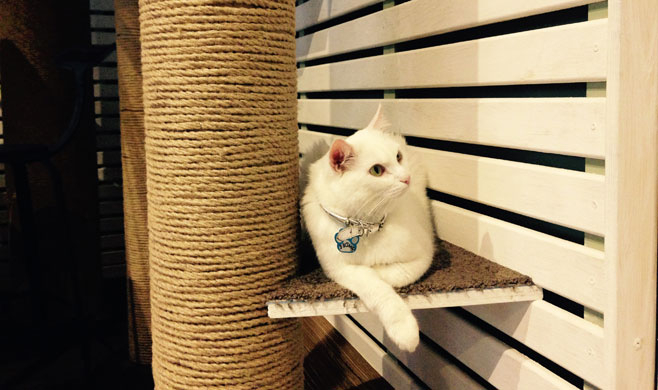 Belek fell out of a window and broke his leg and was then left at the vets.

Apart from watching and petting the cat, the visitors can read a book, play board games or relax in a comfy hammock and see if they can lure a cat to join them on it.

Ivanova, a smiley lady, wearing a hairband with fake cat's ears attached, took the job at the cafe because her own pet shows no affection at all. "It was a tragedy for me, but now I believe in loving cats again," said Ivanova as she stroked lovingly a somewhat moody grey cat.

Nearly all of the visitors treat the animals well. ''Once we had a group of children who started dragging our cats by the tails,'' said Ivanova. After that children have only been allowed in on weekdays from 10 a.m. till 1 p.m.

''We give every child a lesson in kindness, explaining how to deal with animals,'' said Ivanova.

The nine furry ones have a separate room to eat and go to toilet and the cafe is cleaned often so it lacks the cat smell you might expect from nine felines in a not-very-large space.

The idea came to the owners of ''Kotiki i Lyudi'' years ago but it took a lot of time and effort to bring it to life.

''To get a loan from the bank to start a cat cafe is almost impossible,'' said co-owner Oleg Agranovich. There is no such thing as a business plan for a cat cafe, he said incredulously.

Other cafes — such as Solod near metro VDNKh — also have cats, although not as many, but Agranovich dismissed it as an ordinary restaurant with a couple of cats walking around the room.

Visitors to the cafe can drink as much tea and eat as many snacks as the want and just pay for the time spent there. The cafe has yet to fix prices and is currently accepting any donations from those who visit.

''The cat cafe in London is booked for six months ahead,'' said Agranovich. ''We will try and have the same success.''