A man smiles while lighting a cigarette in his kitchen as two friends arm-wrestle on the kitchen table in a photo. In another, three women in traditional costume stand on a snow-covered landscape. Their faces are covered.

The two photos show both the modern and traditional, a contrast that occurs again and again in "Group Exhibition" at Winzavod, which looks at the two Volga republics of Marii-El and Chuvashia.

The exhibition is not just photos, but also traditional cultural artifacts such as woven head-dresses in a show that has been put together by ethnographers and anthropologists as well as artists.

One of the photographers, Fyodor Telkov, "understood his task to create a link between ethnographical focus on costume and how the inhabitants live today," said Nikolai Ssorin-Chaikov, curator of the exhibit and an anthropologist at Cambridge University, pointing toward a photograph of an old woman in traditional Mari dress, including a necklace made of coins. 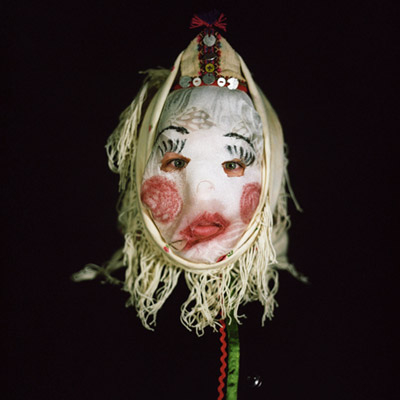 In another picture, two young villagers, one in traditional dress and the other in a contemporary sports gear, are smiling at the camera, standing in front of a car. "If you look at modern village life, what is the important marker of identity? It is not your traditional clothing, but having a cool car and a sport suit," Ssorin-Chaikov said.

"We are trying to critically engage with the genre of ethnography and anthropology. In Russia it is traditionally focussed on a disappearing world with exotic touches, but we argue that ethnography can be a window into everyday life," he said.

There are 550,000 Maris in Russia, most living in Marii-El with some in the Sverdlovsk region and the Nizhny Novgorod region. One photo set is devoted to the Mari in the Urals, who are trying to revive their culture after years of decline, which has seen their language mix with Russian and the abandonment of holy groves.

In Marii-El, many Maris are assimilated with Russian, Tatar and other ethnic groups, but traditional culture, pagan rituals, clothing and festivities have been preserved in some areas.

The Chuvash people are native inhabitants of Chuvashia and in the republic number about 500,000. They are the largest group of Turkic people who follow the Christian faith, although traditional beliefs are a mix of polytheism and atheism. 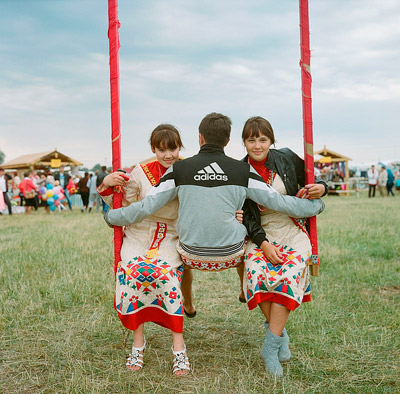 Modern and traditional combine at the Akatui folk festival in Chuvashia.

Father and son photographers Vladislav and Ivan Mikhalkov show ­images at the exhibition of Chuvashia decades apart, tracking the changes in ­Chuvash society. Multi-story buildings are shown in photos with branches attached — the branch is an ancient symbol for the universe.

As part of the project, "photographs with no textual context are accompanied by comments from sociologists, economists and political scientists, who give their opinion on what is being reflected in the pictures," said Marina Bobyleva from the Triumph Gallery, a co-organizer of the exhibit.

A picture of a peaceful rural scene has someone guessing that it is a river for fishing, while someone grumpily writes: "I don't like these photographs. They don't reflect my Russia. And they certainly don't match my internal impressions. So I won't describe them."

Photos by Japanese photographer Ikuru Kuwajima show Mari rituals include "Shoryk-Iol" or "Sheep's Leg" where adults and children search a sheep pen for white lamb for good luck in the coming year. The faces of the participants are covered to stop bad words escaping.

The project also takes a look at the capital of both republics. Yoshkar-Ola, the regional capital of Marii-El, is a surreal mix of buildings in different styles, looking here like a part of the Kremlin, there like a magic castle from a Disney film.

"It raises the question: 'What is tradition? What is modern?'" said Ssorin-Chaikov.

Glorious charred beets and vegetables with creamy cheese will keep everyone happy at the grill.
The MT List

"Major Grom: Plague Doctor" is the newest international smash-hit, a record for Russian films. Is it all it's cracked up to be?
window dressing

Ivan Khafizov is a Man on a Mission to Save Nalichniki

These beautiful house decorations were most popular in the 19th century.