Freedom is on the curriculum at the Garage Museum of Contemporary Art with "Grammar of Freedom / Five Lessons," an exhibition based around five ways of looking at art's role in the search for freedom.

The Garage museum in collaboration with the Moderna Galerija in Ljubljana, Slovenia has put together an exhibition that shows work by more than 60 artists and art collectives. The main part of the exhibition is made up of works from the Arteast 2000+ collection, brought over from Slovenia.

The themes of the lessons, said Snejana Krasteva, one of the curators for the exhibition, are strategies common to both Russian and European artists: "What is interesting is to look at what is similar. Even if people don't speak the same language."

"These [art] forms have emerged in a very different context — the lack of an art market meant that people had different motivations for doing art," said Krasteva.

Oppression, lack of infrastructure and Cold War tensions are a few of the "parallel legacies" that Russia and countries of Eastern Europe enjoy, Krasteva said.

"This lack of infrastructure and lack of support encouraged artists to engage in self-organization and assume the role of art institutions," Krasteva said. This was particularly true in the Soviet Union, where, unlike their Eastern European counterparts, Soviet artists had almost no contact with the Western art world. Tight restrictions on the postal service in the U.S.S.R. limited correspondence and exchange of ideas. Lesson four in the exhibit "The Practice of Self-Organization as Resistance" comes out of this isolation.

The exhibition opens with the "grandmother of performance art," Serbian artist Marina Abramovic and her 1974 performance "Rhythm 0" as the first subject in "Lesson 1: The Body as a Tool for Liberation." In the original installation in Galleria Studio Morra in Naples, seventy-two objects — including a loaded gun — were laid out on a table to use as the audience wished on the body of the artist. This lasted six hours and ended with the artist holding a gun to her head. "That was the heaviest piece I ever did because I wasn't in control. The audience was in control," Abramovic once said. 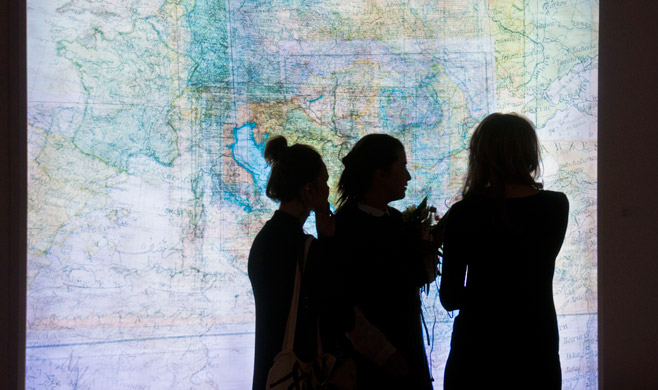 Garage will host a conference in March on art in the East and the West.

In the second lesson, "The Transformation of systems," Bulgarian contemporary artist Ivan Moudov takes untitled but often well-known works of art and renames them as he sees fit in a series called "Certificate of Namegiving."

One corner of the exhibit has a table covered in letters from artists in response to Serbian activist Goran Dordevic's art project "International Strike of Artists."

St. Petersburg collective Chto Delat's four-channel video installation "Excluded. In a Moment of Danger" looks at the role social media plays in society and in the development of protests. "The purpose of art is to change the consciousness of man and to affect change in the real world," said one Chto Delat member, Dmitry Vilensky.

"Freedom is not for beginners," said Dragan Zivadinov, a theater director from Slovenia who also founded an avant-garde art movement in the 1980s. "After being confined in a tiny cell with two murderers, force-fed through tubes in my nose because I went on hunger strike, I started to understand what it meant to truly wish for freedom."

The five lessons do not end with the exhibition and Garage has organized an educational program to open up the conversation about what freedom is. "We want to move it from the abstract and philosophical level to the concrete and strategic. That's why we chose the word 'lesson,'" Krasteva said.

In March the conference "Where Is the Line Between Us?" will be held to discuss the art in the East and the West. Speakers include Zdenka Badovinac, director of the Moderna Galerija, and Anthony Gardner, University of Oxford academic and contemporary art expert.

"This is not a nostalgic exhibition. It is looking at the past through the present and concretely at the future," Krasteva stressed. "It is essential now more than at any time with Russia heading down this path of isolation. ... It is important to realize that the tradition of Russia is close to Europe. Artists have always been the first to realize this and to initiate collaboration and so we wanted to continue this through the exhibition."