"I always thought this democracy stuff was, you know … ," Alexei Yudnikov said, his voice trailing off with disgust still ringing in it. "Yes, yes! No, no!"

The joke was both subtle and obvious. Yudnikov was emceeing the reopening of the embattled Teatr.doc at its new space on Spartakovskaya Ulitsa after it was forced out of its well-known old basement near Pushkin Square at the end of last year. The performances Saturday were running long. Attention was flagging. The heat was rising.

A few people had even given up standing in one of two doorways, straining to see what was transpiring on a stage area so usurped by the overflowing crowd that it barely accommodated three actors comfortably. Some walked outside to the windows behind the actors and peered back in for a better look. Some pushed the windows open to get a better listen. That elicited more bursts of laughter from the jam-packed crowd, although the actors didn't understand what was going on.

That's when Yudnikov put the question to the faithful.

"Shall we break for an intermission?"

"Yes, yes!" some shouted. "No, no!" others shouted more loudly. The nays took the day and, by democratic choice, the evening went on uninterrupted.

It seems fair to say that Teatr.doc, known affectionately as Doc by its international army of fans, was basking in the glow of success. Just four months ago artistic director Mikhail Ugarov and managing director Yelena Gremina learned by accident that their popular underground theater, the site of numerous bold social and political theatrical events, was to be evicted from a space on Tryokhprudny Pereulok that they had rented for 12 years without particular incident. The authorities at the Moscow Property Department decided to kick them out as early as June, ostensibly for violating reconstruction regulations, but they hadn't bothered to tell the tenants that.

None of Doc's controversial productions figured in the official arguments, but few doubted they were the real source of official displeasure. They include "BerlusPutin," a spoof of the relationship between Russian president Vladimir Putin and former Italian prime minister Silvio Berlusconi; "One Hour, Eighteen Minutes," a docudrama about muckraking attorney Sergei Magnitsky, who was murdered in prison; and several one-off theatrical events that supported the members of Pussy Riot when they were still in prison.

Once the news of Doc's impending demise did break, things began happening quickly. Letters of support gathered over 6,000 signatures from people in 40 countries who have admired Doc's work. The theater appealed the eviction and lost. Even as Doc hosted a farewell event on Dec. 30 the authorities made their attitude to the theater quite clear: A combined team of policemen and representatives of the Culture Ministry interrupted the showing of a documentary film about Ukraine's Maidan rebellion, claiming that they were investigating a bomb threat.

Why Culture Ministry representatives were attending to a bomb threat, no one could explain. Just as no one bothered to explain why, under a bomb threat, the small crowd was not evacuated, but was essentially held captive in the small basement premises. Meanwhile, those searching for bombs trashed large amounts of Doc property, including the sets to some of their productions.

To make it clear what was at stake, the authorities detained Maksym Kurochkin, a well-known Ukrainian playwright and the evening's host, and questioned him until 5 a.m. 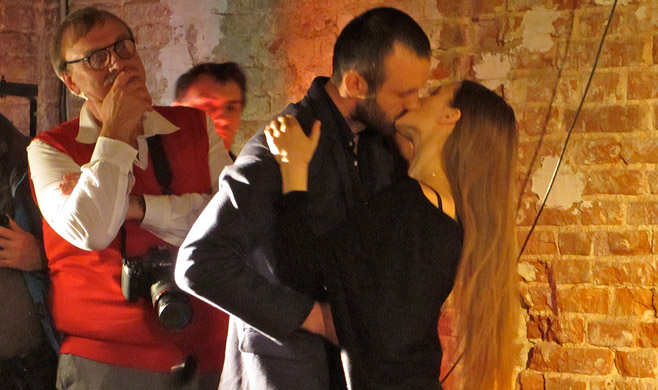 Managing director Gremina was summoned the next day, not to a police station, but to the Culture Ministry where she was told, in her words, "Haven't you had enough? Next time will be a lot worse."

It was a bizarre ending to a historical 12 years of theater in Moscow's smallest venue if for no other reason than the fact that the Culture Ministry has no jurisdiction over Teatr.doc. Doc is a private organization, funded by donations, ticket sales and grants. It is, by Russian law, an independent entity that answers neither to the Culture Ministry on the federal level, nor to the Moscow Culture Department on the municipal level.

That hasn't stopped the ministry from attempting to exert pressure on Doc. Gremina received a telegram on Feb. 9 to "write up a report" about the Dec. 30 incident. Responding on Facebook with her typical manner of light humor and steely resolve, she wrote, "Gentlemen officers! Summon me to court. I'll come with a lawyer. But come to your office? No thanks."

The opening of Doc's new space some 200 meters from Ploshchad Razgulyai on the eastern side of the city was something of a miracle. Gremina only began looking for new digs in November, when it became clear that the old space was not to be saved. A rental contract for the free-standing, one-story structure on Spartakovskaya was signed only in January. The 18th-century building had to be gutted, cleaned, reinforced and altered, within the confines of laws protecting historical sites, to suit a 21st-century theater.

When the doors opened to receive the first crowd on Saturday, not everything was ready. There were still ragged walls and ceilings in a back room. Most of the theatrical lighting has yet to be hung. There is virtually no furniture aside from the 120-or-so seats in the performance hall.

Architect Oleg Karlson has big plans for transforming the space even more in the near future. He was one of the first to speak at the opening and he laid out grand plans of an enlarged stage on the ground floor and a second stage in the basement.

Gremina, though excited by the prospects, is a tad worried as well.

"Karlson is incredible," she told me after the evening had ended. "He's doing all his work as a volunteer. These are the kinds of people who love Doc. They're enthusiasts. Karlson is another of the crazies among us," she added with clear admiration. "But I have to keep an eye on him. I promised the landlord we would not alter this historical building."

The opening consisted of performances of skits and monologues written by such Doc regulars as Kurochkin, Mikhail Durnenkov, Rodion Beletsky, and Yevgeny Kazachkov, and performed by a long line of popular Doc actors.

One piece was the first airing of an excerpt from an as-yet-untitled show that will open May 6, on the third anniversary of a massive political protest that turned violent on the eve of the inauguration of Vladimir Putin to a third presidential term in 2012.

If anyone thought Teatr.doc was going to be intimidated, they'll have to think again.