Nine Ukrainian servicemen have been killed in fighting Russian-backed separatists in the past 24 hours, the Kiev military said Tuesday, as rebels fought to encircle a key town straddling transport routes between their two strongholds.

Violence in eastern Ukraine is at its worst since a cease-fire was agreed last September and Ukraine and the West accuse Russia of openly supporting the latest rebel advance with money, arms and troops on the ground.

Military spokesman Vladislav Seleznyov said 29 servicemen had been wounded in addition to those killed, adding that fighting was the most intense near the strategic town of Debaltseve, north-east of rebel-held Donetsk.

"The situation remains tense. In the past 24 hours illegal armed groups carried out 120 attacks on government positions," he said in a televised briefing.

In Kiev, parliament was due to meet for an emergency session to vote on a statement that would call Russia an aggressor-state, lawmakers said. It was not immediately clear what implications such a declaration would have beyond its symbolism.U.S. Ambassador to the United Nations Samantha Power said on Monday that deadly attacks on the port city of Mariupol on the weekend show that Moscow's objective is to increase the Ukrainian territory it controls.

Separatist Donetsk and Luhansk regions, known as the Donbass, together account for around 9 percent of Ukrainian territory, excluding the peninsula of Crimea, seized by Russia from Kiev last March. 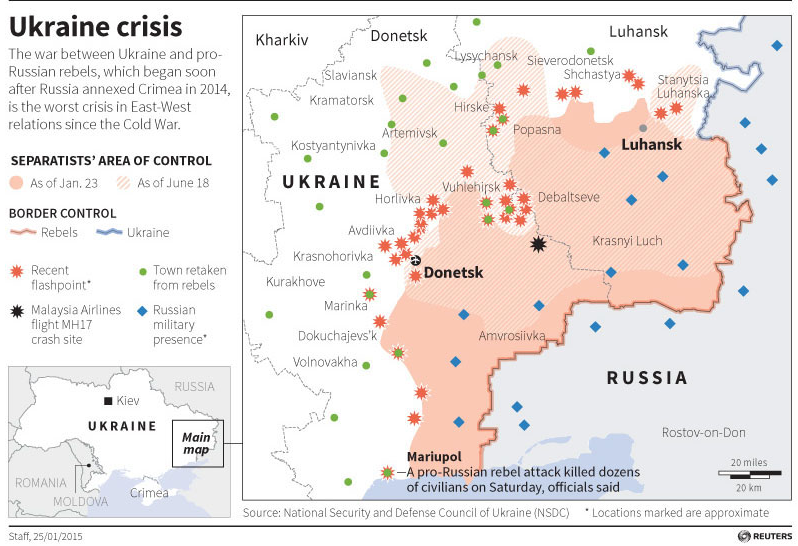 Rebels control less than half of this area, but have made its two largest cities the capitals of their self-styled 'People's Republics.'

After months during which the truce was punctured by small-scale skirmishes on the front line, rebels said last week they were left with no choice but to launch an advance. Their main aim, they say, is to push back government forces that had been shelling rebel-held cities.

The Kiev government sees the rebel advance as a repudiation of the cease-fire, restarting a war in which 5,000 people have died. Kiev and NATO believe thousands of Russian troops are in eastern Ukraine fighting for the rebels with advanced weapons, despite Moscow's denials.

The rebels have vowed to encircle Debaltseve, a town with a preconflict population of around 46,000 that straddles key transport routes between the two separatist strongholds.

So long as it is under the control of Kiev troops, it weakens the separatists' frontline as it forms a "tongue", extending into rebel-controlled territory, separatist deputy commander Eduard Basurin said.

NATO has blamed Russian-backed separatists for a sharp escalation of violence in eastern Ukraine and called on Moscow to stop destabilizing Ukraine...
news

Russian-backed rebels pushed forward Monday with a new offensive that has brought all-out war back to eastern Ukraine after a five-month ceasefire.
news

The ruble and Russian stocks fell sharply on Monday, following a return to full-scale warfare in eastern Ukraine and threats of further Western sanctions...
taking aim