He's the head of one of the seemingly most conservative art institutes — St. Petersburg's Hermitage Museum — but Mikhail Piotrovsky has been in the middle of a dispute about contemporary art this year as the museum hosted the 10th biennial Manifesta art festival.

The festival, which finished earlier this month, was criticized on all sides — by those who dismiss contemporary art's worth within Russia and those who felt that the venue should have been changed as a response to Russia's anti-gay propaganda laws.

People who said that such events shouldn't be held in the current political climate are "fools and idiots," Piotrovsky said in an interview with a group of journalists earlier this year in a press trip to mark the 270th anniversary of the Imperial Porcelain Factory.

"Those trying to dictate art based on their own preferences for the left or right are idiots," he continued.

"We created Manifesta, and it became a manifestation of everything that it should be: a wonderful cultural event, for the world, for Europe, for Russia, for St. Petersburg and for contemporary art, as it didn't fit politically into the background of power that exists now," he said.

"Here one thing is important that exists at present — the belief in the autonomy of cultural establishments in Russia, both financial and political," Piotrovsky said about the independence of Russian artistic institutions.

Piotrovsky maintains that the Hermitage will not compromise its work for politics.

"We are going to continue to do everything that we do, and it might be that our work and actions are going to sound a little louder."

Even the sanctions imposed by the West on Russia didn't stop the festival from going ahead.

"Manifesta was created in conditions when nobody wanted to have it here — I mean the public, not the government. The government is indifferent," Piotrovsky said.

When asked whether the museum had received any threats over the exhibition, Piotrovsky replied: "'Threats' is not the correct word. 'Threats' is from the political lexicon. Projects are taking place. And projects are going to happen regardless of the government's position."

Overall, the run-up to the festival highlighted the fact that Russians are, in general, fairly resistant to contemporary art yet, according to Piotrovsky, this frame of mind isn't limited to Russia.

"People aren't open to it. In fact, people all over the whole world don't like it."

The reason he gives for this is that "a significant part of contemporary art isn't art but happens to be political actions."

Piotrovsky says that the solution for this — and what they tried to do with Manifesta — lies in the need for contemporary art "to be put in its place. It needs to be put in the context of world art, and then it will become clear."

At Manifesta, political statements were woven into works such as Marlene Dumas' series of ink portraits of renowned gay men including Pyotr Tchaikovsky, Nikolai Gogol and Tennessee Williams, entitled "Great Men," or the references to Pussy Riot in the cats that appear in Erik van Lieshout's "Basement."

The huge installation "Abschlag" by Thomas Hirschhorn featured a semi-demolished apartment building in which famous paintings can be seen on the walls of the individual apartments peeking through the rubble. 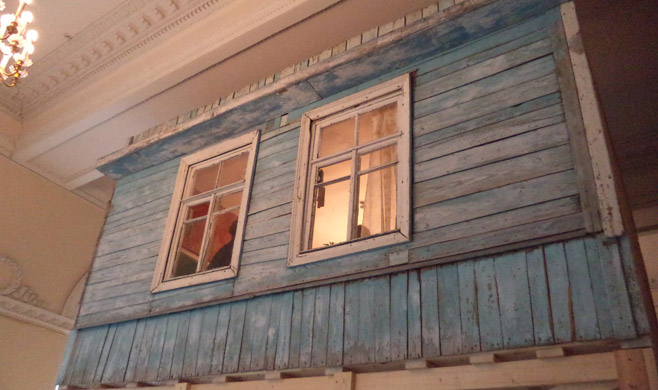 Manifesta, which ended this month, showcased a range of unusual works.

The exhibition also tackled issues related to the crisis in the Ukraine, as Piotrovsky commented at the time that "all of the acute problems in the Ukraine are shown at Manifesta."

Estonian artist Kristina Norman erected a sculpture in the shape of a fir tree entitled "Souvenir" on Palace Square outside the Hermitage.

The sculpture symbolized the half-finished Christmas tree that was on Kiev's central square, known as Maidan, and is a call to peace.

Piotrovsky highlighted the need for a statement about Maidan to be "artistically interwoven and beautifully so."

"The work of the Hermitage influences the events in Ukraine," he said of the effect of the exhibition, where "the story about Maidan turns into a warning of what can happen," which should "sober up all Ukrainians" regarding what gatherings with large crowds can turn into.

"I think that ultimately the Soviet story shows that culture tricks politicians and always makes everything good in the end," Piotrovsky said of artistic activity that is allowed by the government.

"This is why there is always this cunning game, the results of which show who has tricked whom."

Even before Manifesta, the Hermitage had already moved into showing contemporary art and has a wing devoted to it. There was uproar after the museum put the Chapman Brothers' show "End of Fun" on display with critics saying it insulted visitors' religious beliefs, but Piotrovsky and the museum did not kowtow to the critics and said at the time: "There is nothing sacrilegious here but a clear desire to ruin the mood in our city."

"Contemporary art is like all other art. It is still growing, it still needs to be brought up so that good, real art will come of it. Museums are bringing it up. Museums give a global evaluation to the value of art," Piotrovsky said in the meeting with journalists, emphasizing the need to increase the longevity and relevance of art in the present day.

Despite the fact that next year's planned bilateral cultural celebrations with Poland have been canceled over tensions in Ukraine, the Hermitage Museum will go ahead with its plans.

"This is the last bridge that can be blown up when all other bridges have been blown up — the bridge of culture needs to remain. And we are always working on this."