Russia's hard currency reserves have fallen by the equivalent of almost $100 billion in the past year to the lowest since early 2009, contrasting with a rise in holdings in many other emerging economies.

Russian reserves stood at $428.6 billion at the end of October, down from $524.3 a year before due to multi-billion-dollar Central Bank interventions to defend the ruble. They have declined further to $421.4 billion since then.

While the scale of the fall is not on a par with moves seen during the 2008-2009 global financial crisis, when Russia spent almost $200 billion in the ruble's defense, it represents a fall of almost 20 percent from the levels of one year ago.

The following graphic shows the state of hard currency reserves in several emerging central banks at the end of October: 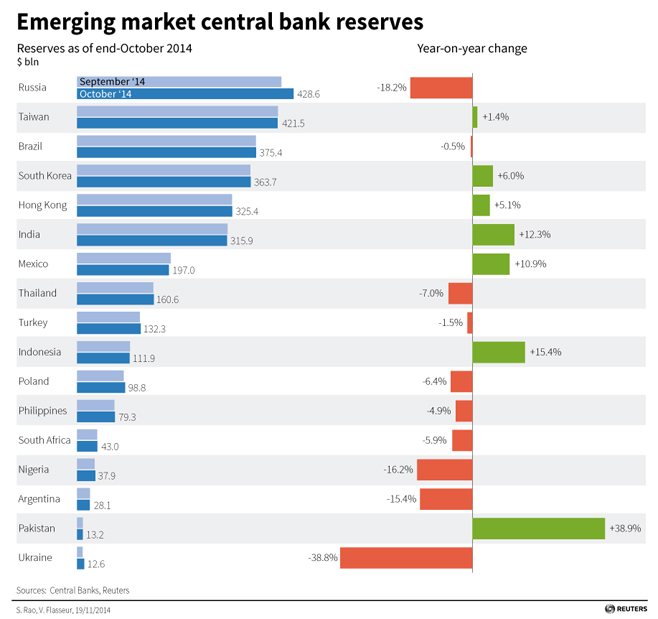 Some of the decline is down to valuation effects as the euro, which makes up 40 percent of the reserves, has fallen more than 8 percent this year versus the greenback.

"The switch to free float is good news for stabilization of reserves. We may expect some intervention from time to time but not the steady drain that we saw in recent months," she said.

Orlova noted also that Russia's headline reserves include $170 billion from two savings funds, the National Wealth Fund and the Reserve Fund. Some of this may be used to help banks and companies hurt by Western economic sanctions, weak oil prices and the slowdown in economic growth.

"The long-term outlook is for a reduction in reserves, the question is how much," Orlova added.

Russian reserves are also now below those of Taiwan for the first time since mid-2006, this graphic shows:

Taiwan's reserves have risen just 1.4 percent in the past year, but those in Indonesia, Mexico and India have gone up by 12-15 percent in this period.

The steepest drop in reserves has been in Ukraine where they fell to $12.6 billion from $20.6 billion a year back.

Nigerian reserves are also sharply lower after heavy central bank interventions to support the naira, which has fallen to successive record lows. Nigeria's reserves are down $7 $7 billion, or 16 percent, from year-ago levels.

Ruble Slips Against Dollar and Euro as Oil Prices Drop

The ruble weakened slightly against the dollar and euro at market opening on Wednesday, falling back after gains in the previous session.
news

Pressure is growing on Russia's Central Bank to adopt more radical measures to defend the tumbling ruble, such as interest rate rises, but there is...
parachuting in