The ruble weakened on Wednesday, dragged down by a renewed decline in the oil price following a short-lived rally that had helped the Russian currency firm on Tuesday.

On Wednesday oil benchmark Brent was down slightly at around $78.3, softening after a brief rally earlier in the week, with all eyes on an OPEC meeting next week.

The ruble is expected to gain support during the coming days from the monthly tax period requiring exporters to convert foreign currency into rubles. 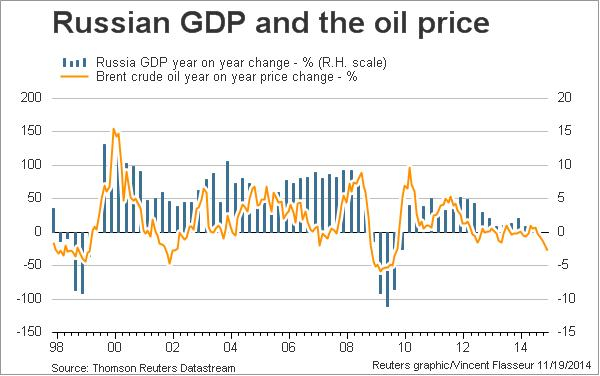 However, low forex market turnover of $3.6 billion on Tuesday indicated that exporters are not yet selling significant amounts, VTB Capital analyst Maxim Korovin said in a note.

Alfa Bank analyst Natalia Orlova said in a note that a decision by the Central Bank to limit its provision of ruble liquidity was positive for the Russian currency. On Tuesday the bank had provided 2.7 trillion rubles ($57 billion) at a weekly repo auction, below the 3.1 trillion demanded by banks.

"We ... welcome the CBR's actions and believe that limiting the supply of ruble liquidity is a more effective way to stabilize the FX market versus a rate hike per se," Orlova said, predicting that the measure would help the ruble appreciate to 41 against the dollar by year-end.

Russian stocks were mixed, with the weaker oil price and ruble weighing on the dollar-based RTS stock index. The RTS was down 0.4 percent at 1,017 points while the ruble-based MICEX index was flat at 1,520.

Shares in potash producer Uralkali were down 6 percent on Wednesday, following its announcement on Tuesday that it had been forced to evacuate a major mine in the Perm region because of a brine inflow.

President Vladimir Putin said Tuesday that the Central Bank had made the right decision earlier this month to allow the ruble to float and that the ruble's...
news

Russia's Central Bank governor defended on Tuesday the bank's decision to float the ruble, saying continuing to manage the exchange rate would have...
union state