Every Russian has memories of the suburbs, and mine are quite straightforward. I lived in a suburb in southeast St. Petersburg from the age of 5 till 10. I remember looking out of the kitchen window — on the 12th floor of a beige brick high-rise — and staring at a square patch of grass, crossed by a diagonal path, with two other absolutely identical high-rises on the right and on the left. Sometimes a barrel on wheels arrived to sell milk or kvas, and, like beads on a string, tiny people in tiny jackets formed a queue. There was a hill we used for sledding in the winter and, as I later found out, it was made of rubbish from a time when this distant part of the city only had wastelands and dumps. Behind the patch of grass there were rows of tin garages, and behind the garages was the dusty sky crisscrossed by wires. A couple of years ago they built a big highway that stretched over the garages, connecting the edge-land of my childhood with some other edge-land.

I also stayed in the suburbs a couple of times during trips to Moscow as an adult. In summer, in Yugozapadnaya, where the high-rises emerged from the trees like abandoned Portuguese churches in Goa, urban jungles under endless tropical rain. Then in winter, at Petrovsko-Razumovskaya, an unbearably grim corner of the universe where I had to ride a freezing trolleybus from the metro for 15 minutes passing a factory that made crutches. Once I came back from a party around 7 a.m., my host was asleep, and I spent 40 minutes lost in the empty frozen nowhere looking for the right door: All doors in all the estates around were absolutely identical, just like the estates themselves.

Russian suburbs are organized in mundane repetition. There is a school, a couple of small shops, driveways with huge holes, hopelessly thin young trees and an elderly gray-haired lady concierge sitting downstairs in a glass cubicle filled with houseplants, powerless to prevent the outbursts of violence, robberies and staircase drug consumption.

Large estates are like fractals, a space created by facing mirrors. Building 8 is exactly the same as Building 14, and its young inhabitants must perhaps have the same preoccupation: to someday acquire a similar cell in one of these purpose-built units around town. Can creativity come from places like these? In contemporary Russia, somehow, it does.

The new generation of photographers were the first to embrace the edge-lands with their eyes wide open. To fully explain the strength this requires from a visually aware person, it is important to appreciate how ugly the suburbs are. Not beautiful ugly like brutalist buildings, but ugly in the most tacky way. The buildings are disproportional, and the materials they are built with are cheap. The shop signs look like shroomy seapunk visuals, and there is always an obligatory old sofa or washing machine abandoned in a little park, not to mention cigarette butts, empty cans and plastic bags — all details that don't do any favors to a photographer.

Yet contemporary photographers still choose to embrace the surroundings as they are, with all their dirty imperfections. Their work plays variations on a theme. It could be a study of an urban landscape carried out with the help of 18th-century pastoral compositions, like the photos of Alexander Gronsky. It could be a complete portrait of a district: personal by Yegor Rogalev, architectural by Alexei Bogolepov, or surreal by Alexander Bondar. It could be part of an ambitious project of mapping and exploring unseen Russia, like Max Sher. Overcoming pictorial ugliness and boredom is rewarding: the resultant image is the snapshot of how Russia really looks and has looked all these years unseen.

In recent years, the Russian suburbs have achieved some international exposure as the backdrop for a new underground fashion scene. Internationally celebrated menswear designer Gosha Rubchinskiy was the first guide into this bleak and savage world, recruiting boys from the street — the young post-Soviet generation — as his models. He exposed the world he lived in — ugly high-rises, mean streets, carpets on the walls, echoing sport halls — to the world outside Russia, and it smelled of the rough underground spirit of film director Larry Clark and early issues of British, rebel-style bibles "The Face" and "i-D."

Rubchinskiy has inspired some successors: Independent brands "Forget Me Not" and "Standard Deviation" have chosen the weirdly beautiful parallel world of the suburbs to showcase their minimal avant-garde pieces. The choice was a rough antidote to the glamor of glitzy Moscow, but it was also, quite simply, the place where they actually lived. Masha Demianova, a photographer actively bringing cinematic narratives and the female gaze into Russian fashion imagery, found unexpected inspiration in the Moscow suburb Zyablikovo in after coming back from New York, as it was a completely unexplored territory for her. 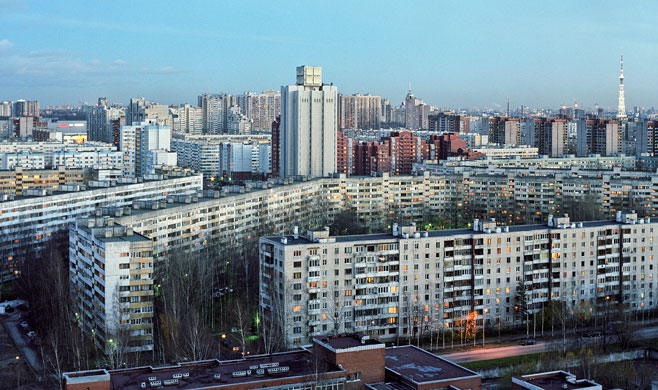 Suburbs can be dangerous. "You wouldn't want to end up there after dark."

But, for the young generation, bringing the suburbs into their creative practice is also a way of embracing who they are. A good example is filmmaker Avdotja Alexandrova's project "Holodno." The brand only produces one garment, a sweater with the word "holodno" (cold) on it. In one of the photos, beautiful young people are standing on a balcony with white high-rises behind them. It is a way of proclaiming, "Yes, it is cold in Russia, and, yes, we are Russian although we did not choose to be, and this is where we belong." Not in a nationalist way, but to say that not only the poorest and the most hopeless come from the suburbs: We all do.

There is perhaps one important point that I've missed. Unlike the suburbs of Scandinavia, resting in perfect stillness, or the family-oriented suburban universe of Britain, Russian suburbs are more like the suburbs of Paris — you wouldn't want to end up there after dark. These areas are rough and unfriendly, full of small green zones and wastelands that are pitch-black at night and where, for sure, someone was once stabbed or raped. The suburbs' most faithful inhabitant and its uncrowned king is the gopnik, the Russian equivalent of a British chav. The gopnik is dressed in a tracksuit and can be found squatting by the local shop with a can of Jaguar [alcoholic energy drink], sunflower seed skins scattered all around him. He is conservative, aggressive, homophobic, nationalist and racist. He is the one who was throwing watermelons around in the riot at the grocery market in Biryulyovo that was allegedly operated by illegal working migrants from the south. He dislikes people who look different, and he most likely dislikes you.

The gopnik is the key figure in the work of young artist Petr Davydtchenko. He explores the behavioral patterns of lost Russian youth in his performances, which have so far included drinking a whole bottle of vodka while burning things, and shaving a volunteer's head while wearing a balaclava with the recognizable Adidas three-stripe. Davydtchenko grew up in Arzamas, a small town in the heart of European Russia, but moved to Stockholm as a teenager. "Growing up in Russia I absorbed the gopnik subculture at a very close range," he told me. "In order to deal with the subject I am adopting and transforming some of the gopnik rituals and habits, placing myself in contexts that repulse me." Davydtchenko's interest in violence, burnout and extremity is reminiscent of French artist Cyprien Gaillard, who used footage from a fight in a Moscow suburb in an artwork. But as much as Gaillard's work is from the outside, Davydtchenko's comes from the inside.

The growing presence of suburbs in Russian contemporary culture, particularly visual, shows that a new generation of creatives are looking for a new honesty. Surrounded by media-fed lies day after day, they would like to tell the truth about themselves. You can take us out of the suburbs, but you can't take the suburbs out of us. We, like our peers in New York, wear tracksuit bottoms, but partly to kill the inner fear of the gopnik. The suburbs are the best reflection of Russian life — vast and meaningless, ugly and violent, littered with scrap metal and plastic bags, but also full of melancholic beauty during a radiant chemical-pink sunset. This is our ugly, mean and elusive Arcadia, impossible to find and impossible to leave.

This article first appeared in The Calvert Journal, an online guide to a creative Russia at www.calvertjournal.com.