High-caliber weapons fire echoed sporadically Tuesday through the eastern city of Donetsk and the mayor urged residents to stay home a day after fighting between Ukrainian troops and separatist rebels reportedly killed dozens.

Local morgues were overflowing with bodies and rebel leaders said Tuesday that the death toll could rise up to 100.

The city of about 1 million was mostly quiet in the afternoon after an arson attack in the morning that torched a local hockey rink. Occasional gunfire was heard in the morning outside Donetsk Airport.

Poroshenko, who has yet to be sworn in, has vowed to negotiate a peaceful end to the insurgency in the east, but also has called the separatists "Somali pirates" and promised he would stop them from sowing more chaos.

The bodies of about 30 insurgents were brought Tuesday to a hospital morgue in Donetsk, said Leonid Baranov of the separatist Donetsk People's Republic, who was at the Kalinin morgue. The fighters had been wounded and were being transported to a hospital in a truck when it was shot up by government forces, Baranov said.

Baranov said up to 100 rebels were probably killed in Monday's fighting, adding that many bodies had not yet been recovered because they were in areas under government control.

"As they are controlling the airport and the fight was there … we cannot right now identify exactly how many victims we have," he said, adding that hundreds were also wounded in the fighting.

He said the morgue was too small to hold all the bodies and authorities were searching for refrigerator trucks pending identification of the dead.

AP journalists saw many dead bodies piled up at the Kalinin morgue but could not immediately count them or confirm Baranov's statements.

Another Donetsk insurgent leader, Denis Pushilin, also said up to 100 people have been killed and asserted that up to half of them could be civilians,  Itar-Tass reported.

Pushilin said government snipers were firing at people trying to evacuate the bodies. His comments also could not be independently confirmed.

Early Tuesday, unidentified men stormed Donetsk's main ice hockey arena and set it ablaze, according to the mayor's office. The arena, owned by a local Ukrainian lawmaker, had been scheduled to host the 2015 World Championships.

By Tuesday morning, Donetsk Airport was under full government control, Ukraine's acting Interior Minister Arsen Avakov said, adding that dozens of insurgents may have been killed but government forces did not suffer any casualties. 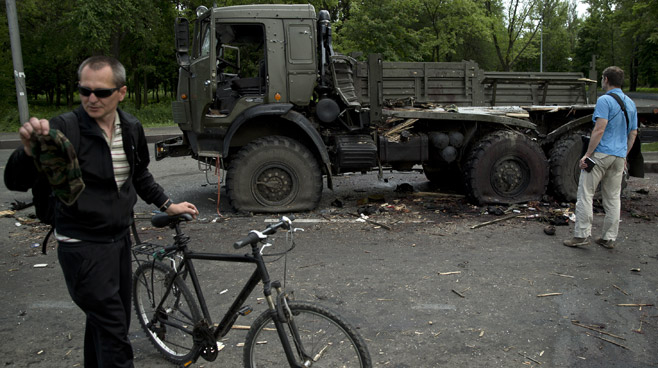 A man holding up a balaclava that belonged to a rebel killed in a gunfight with Ukrainian forces in Donetsk.

The Organization for Security and Cooperation in Europe, meanwhile, said it had lost contact with one of its four-man monitoring teams in Donetsk on Monday evening. There was no immediate claim of responsibility but rebel groups have previously kidnapped OSCE monitors in Ukraine.

In the neighboring Luhansk region, which like Donetsk has declared independence from the central government, the Ukrainian Border Guards Service said its officers repelled a group of gunmen from Russia who were trying to break through the border. It said one intruder was wounded and that border guards seized several vehicles loaded with Kalashnikov assault rifles, rocket grenade launchers and explosives.

The interim government in Kiev has pledged to press ahead with the operation against insurgents, which has angered residents, many of whom see the government as nationalists bent on repressing Russian speakers in the east.

Speaking at a televised government session Tuesday, Vitaly Yarema, a deputy prime minister, said the "anti-terrorist operation" in eastern Ukraine will go on "until all the militants are annihilated."

In Moscow, Foreign Minister Sergey Lavrov voiced strong concern Tuesday about the decision to intensify the military operation in the east and called for an immediate end to fighting.

Lavrov warned Poroshenko against trying to win a quick military victory before his inauguration, saying that it would be "unlikely to create favorable conditions for a hospitable welcome in the Donetsk region." He promised that Russia will be Poroshenko's "serious and reliable partner" if he moved to negotiate an end to hostilities.

Poroshenko, known for his pragmatism, supports building strong ties with Europe but also has stressed the importance of mending relations with Moscow. Upon claiming victory, he said his first step as president would be to visit the troubled east. He said he hoped Russia would support his efforts to bring stability and that he wanted to hold talks with Moscow.

Lavrov welcomed Poroshenko's promise to negotiate with people in the east and said Moscow was ready for direct talks with Poroshenko — without the U.S. or the European Union as mediators.

"The government's stance is unchanged: bilateral talks without the presence of the U.S. and the European Union do not seem possible under current conditions," he said.

Moscow has denied accusations by the authorities in Kiev and the West that it has fomented the insurgency in eastern Ukraine. President Vladimir Putin annexed the Ukrainian Black Sea peninsula of Crimea in March but has stonewalled the eastern insurgents' appeal to join Russia.

Russia, however, has kept pushing for Ukraine to decentralize its government, which would give more power to the regions and allow Moscow to keep eastern Ukraine in its sphere of influence.