As the Soviet Union fades from the memories of the youngest generations of Russians, it still underpins the consciousness of their parents. The play "Donkey Heart," written by Moses Raine and directed by his sister Nina Raine, focuses on the psychological setup of a family in post-Soviet Moscow, describing exactly how the Soviet past has shaped the current family dynamic of mistrust, lies and heightened emotions. The play premiered at the Old Red Lion Theatre in London as part of a range of Russian plays, exhibitions and literary events within the 2014 U.K.-Russia Year of Culture.

Moses Raine is no stranger to Russia culture: His aunt, Lidia Pasternak, is the sister of Nobel Prize-winning author of Doctor Zhivago, Boris Pasternak. Raine himself has never been to Russia, but was visited in England in the 1990s by Boris Pasternak's son Yevgeny.

Yevgeny's stories had such a great impact on Raine that he based the character Alexander from "Donkey Heart" on him, as well as naming the mother in the play, Yevgenia, a female version of the name, after him as a dedication, as Moses felt that this women was as brave as Yevgeny Pasternak. In fact, one of Evgenyi's stories made it into the play — when Boris Pasternak died, Yevgeny found a small listening device at the grave, which made him so angry that he stormed up to the KGB office at Petrovka 38 in Moscow and threw the microchip in the face of the nearest officer. 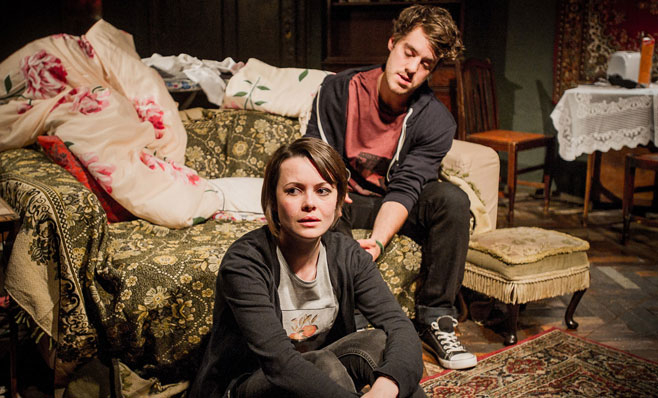 The visit of a British student gives an outsider's view of a Russian family.

The play is highly accessible to an English audience through the use of an English character, Tom. Tom is a student who comes to stay with the family, having previously met Sasha, the daughter, in England. Tom leads "into an understanding of a younger generation," according to Moses. From Tom's eyes, the English audience sees the parts of a Russian lifestyle that may seem odd from an English perspective of relative privilege. For instance, Moses recalls how his little Russian cousins used to talk about food — not unlike the character Sasha in the play — getting excited about the ability to order pizza late at night in England, or when the Pasternaks would come over to England and take back boxes of instant soup to Russia.

Also, while the play is not political in the strict sense, it has been influenced by recent political events in a subtle way.  When describing a situation of turmoil, Moses changed the scene from Kosovo to Ukraine to make the play more relevant, though the tensions in Ukraine were not taking place when the play was originally written.

The inspirations behind different sections of the play came from different experiences. For instance, Raine was so excited about the idea of women talking in code during the siege of Leningrad, that this idea "forced" his hand as a writer, providing a "fire for this play." He used the code speak as a way of communication when a conversation needs to happen between two people in front of someone else who shouldn't be there.

Moses Raine is not a political writer, but he fell in love with Russia during a family visit, "all the time aware how it has changed very quickly," and has attempted to make a "small family drama" which makes a way in for a discussion of Russia's political history with references to the communist past. Moses feels that "we all struggle with the need to remember and forget," as Alexander says at the end of the play.

Glorious charred beets and vegetables with creamy cheese will keep everyone happy at the grill.
The MT List

"Major Grom: Plague Doctor" is the newest international smash-hit, a record for Russian films. Is it all it's cracked up to be?
window dressing

Ivan Khafizov is a Man on a Mission to Save Nalichniki

These beautiful house decorations were most popular in the 19th century.