Contribute Today
By Elizabeth Kaplunov
May 13, 2014

The exhibit "Club of Friends" manages to incorporate music, film, photos and paintings — showcasing a mix of talents from Timur Novikov and his team, the New Artists and the New Academy. Presenting work from the 1980s to 1990s, the show chronicles the artistic movements that sprang up in a time of change and political turmoil in St. Petersburg.

"The unofficial art scene of Leningrad practiced the so-called 'aesthetic otherness.'" said curator Yekaterina Andreyeva. "The artists did not fight Soviet rule or critique or deconstruct it as much as they avoided talking in a Soviet language out of principle … the New Artists lived in a trans-avant-garde world, without division," commented Yekaterina Andreyeva.

Timur Novikov was the driving force behind two unique artistic movements in this period: the New Artists and the New Academy. Founded in a communal apartment in the early '80s, the New Artists included an eclectic assortment of artists ranging from painter Oleg Maslov to video artist Sergei "Africa" Bugayev, who exhibited works together and formed a close social circle.

In 1989, Novikov expanded the informal New Artists circle to create the New Academy, a group vaguely modeled on the ideal of an ancient Greek academy. This group expanded the exhibition activities of the New Artists, and also organized protest/performance pieces. Most famously, Novikov and Bugayev together publicly declared their homosexuality in a 1989 interview, four years before the repeal of a Soviet law outlawing sodomy — Bugayev has since recanted this declaration.

The curatorial staff at Calvert 22 has close connections with Novikov's groups: David Thorp, curatorial advisor at Calvert 22, has been interested in Novikov's work since viewing Novikov's creations in the late 1980s, and even owns a few of the textile pieces by Novikov, while curator Yekaterina Andreyeva was personally acquainted with many of the artists that Novikov inspired. 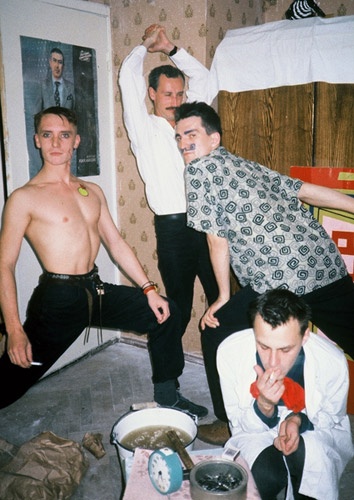 "My inspiration [for creating the exhibition] comes from the works of my friends, as well as my from friends themselves — in particular, Timur, Kostya Goncharov, and Vadim Ovchinnikov, who are always young and beautiful in my memories," Andreyeva explained.

The main theme of the exhibition is rebellion, which can be seen in the parody of the political regime in the Pirate TV network, a video art project created in 1989 by Novikov as a way to promote events in his circle of friends, artists and musicians as well as comment on politics. The channel's main presenter was Vladislav Mamyshev-Monroe, a prominent Russian artist and well-known transvestite and homosexual whose career came to a sad and mysterious early end when his corpse was found floating in a Bali swimming pool in March 2013.

On Pirate TV, Mamyshev–Monroe presents the news and performs in a short series called "The Deaths of Remarkable People" — a play on a famous Soviet television show "The Lives of Remarkable People" — where short vignettes were acted out, such as the deaths of Hitler and Marilyn Monroe. The Pirate TV version of Monroe's death involves Mamyshev-Monroe — in costume as Marilyn — being killed by Teddy Kennedy, represented by a man in a cheap grotesque mask, for "knowing too much."

Other pieces provide rebellion themes less explicitly from their use of color and lack of structure, such as the incredible "Blue Firs" painting by Ivan Sotnikov, which depicts the fir trees near the Kremlin wall in Moscow. The foreground trees could almost be drawn by a child in their simplicity. However, behind the trees, the sinister Lenin's Mausoleum is drawn upside down, representing the rapid change of the 1980s and the sudden freedom experienced by artists of the period. This new freedom allowed musicians and artists to travel abroad to Europe and the U.S. for the first time and meet their idols, and ticket stubs, letters and exhibition posters from these travels are shown in the exhibit.

Sexuality and sensuality were rediscovered in Russian underground art during this more liberal age, a period that already seems distant and foreign in the present resurgence of conservative nationalism, religion and homophobia. As art critic Alexander Yastrebov wrote in a February essay on Artguide.com, "In the U.S.S.R., as it is well known, there was no sex, and in the Russian Federation there is no homosexuality."