Contribute Today
By Gabrielle Tetrault-Farber
May 11, 2014

Central Moscow was engulfed in a sea of St. George's ribbons, Team-Russia apparel and Ukrainian passports Sunday morning as the self-proclaimed authorities of the Donetsk and Luhansk regions ran an improvised polling station for their referendums on independence.

Despite President Vladimir Putin's call last week to postpone the referendum on the independence of the Donetsk People's Republic, eastern Ukrainian separatists have gone ahead with the political exercise.

Scores of Ukrainian expatriates registered in the Donetsk and Luhansk regions turned out to the Moscow polling station. Some waited more than three hours to cast their ballots on the rooftop of a rusting auto repair shop near the bustling Kievsky Station.

The voters passed through metal detectors before climbing rickety stairs to reach the austere polling station. After presenting their Ukrainian passports and proof of registration, voters slipped their ballots into transparent, unguarded ballot boxes.

Still, the exuberance and optimism of voters outshone the modest premises and organizers' minimal budget.

"I feel like today is another holiday, like the May holidays are not over yet," said Lyudmila Lysina, a retired school teacher from the Donetsk region. "I have been in line for almost an hour now, but I will wait as long as it takes. And I will vote in favor of the independence of Donetsk, of course."

As Moscow voters lined up proudly under the flags of the self-proclaimed Donetsk People's Republic, they did not yet realize that their ballots would not count toward the referendums' final outcome.

The official website of the Donetsk People's Republic announced earlier that a polling station would be set up in Moscow. But Donetsk Central Election Commission head Roman Lyagin said on Sunday that none of the polling stations established outside of the region had been coordinated with the self-proclaimed authorities.

"They are doing this on their own initiative," Lyagin said of voting taking place outside of the region, RIA Novosti reported.

The steadfast voters, unaware that their ballots would prove merely symbolic, unequivocally supported the independence of the Donetsk and Luhansk regions.

"Nobody in this line is going to vote 'no,'" said Yury Yaitsky, a 53-year-old construction worker from Donetsk, flashing two rows of gold teeth. "We do not know what will come of this, but all I can say is that nobody here in Moscow or back home wants to live under fascism."

Other voters thought the initiative was a first step for eastern Ukraine to become Russia's newest federal subject.

"We hope that after this referendum, our regions will join Russia," said Margarita Sviderskaya, a 52-year-old author from Novohrodivka in the Donetsk region. "We respect Ukrainian culture, we know many Ukrainian songs and sing them happily. But we do not want our authorities to be fascist." 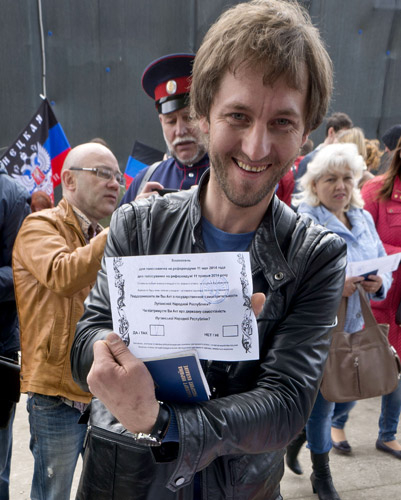 A Ukrainian man struggling to contain his excitement after voting Sunday.

The Russian narrative on the crisis in Ukraine has portrayed Kiev's new authorities, along with the protesters who led President Viktor Yanukovych's ouster, as "fascists." The Kremlin has associated the Maidan protest movement and Ukraine's interim government with Stepan Bandera, Ukrainian nationalist leader who formed an alliance with the Nazis during World War II.

Organizers and police officers present at the Moscow polling station were able to provide only vague estimates of the voter turnout. A police officer told The Moscow Times that there were "too many" voters to count, while a volunteer claimed that "thousands" were waiting in line to cast their ballots.

A police officer on site told The Moscow Times that the voting was being conducted "peacefully" and that law enforcement officials on the scene had no reason to interfere.

The voting was also secured by a handful of Cossacks, a historic Russian militia currently being revived by the government to bolster patriotism.

"Where there are Cossacks, there is order and peace," said Alexei Zybin, a Cossack who was guarding the entrance to the polls.

Passersby chanted "Glory to Donbass!" and "We are with you!" as they waved to the line of voters. Others stopped to pose with the rippling flags of the Donetsk People's Republic.

Organizers of the Moscow polling station denied that any irregularities had occurred during the vote.

"Documents are checked before anyone can even get anywhere near the polls," said Anatoly Sorokin, a volunteer. "We have not seen any Russian passports or anyone trying to cause trouble."

For many voters, the hours spent in line to cast their uncounted ballots were not in vain. The futile political exercise was a symbolic and even spiritual experience.

A wizened woman crossed herself before leaving the polling station, leaving the situation in God's hands.